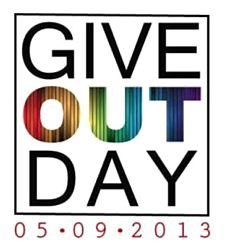 Give OUT Day—the first national initiative to mobilize donors across the country to give to lesbian, gay, bisexual, transgender and queer (LGBTQ) nonprofits—was held May 9 as nine local nonprofits participated, earning money while raising awareness of their causes.

Kara Suffredini, executive director of MassEquality, said they were able to raise about $1,000 during the event.

“From securing safe shelter for homeless LGBTQ youth, to ending discrimination against transgender youth, adults and families, to protecting LGBTQ adults as they age, freedom isn’t free,” Suffredini said. “Give OUT Day provided an opportunity for MassEquality to engage our community and allies about the importance of ongoing support for the critical work that remains to ensure that everyone in Massachusetts is equal, safe and free from cradle to grave.”

GLAD Director of Development Marie A. Longo said their organization raised a little over $2,600. [pullquote]“Our ability to raise so much in a 24-hour time period demonstrates that many are passionate about responding to the needs of Black and Latino/a LGBTQ people and generating more opportunities and resources for our population,” said Yarbrough.[/pullquote]

“Give OUT Day gave us a fun way to engage with people, and gave our supporters a way to contribute that went beyond simply giving money,” said Longo. “By sharing Give OUT links and other information on social media, they introduced GLAD and our message to people in their circles who may not have known us, and our whole community benefits from an increased understanding of the need to financially support LGBT nonprofits.”

“For Family Equality Council, participating in Give OUT this year was less about the dollars raised and more about guiding those new audiences to our website, where they learned about our work—the programs and services we provide—and then we hope many will sign up for our emails, register for our events or join our advocacy campaigns,” said Wright.

Executive Director and Co-Founder of HBGC Corey Yarbrough also said the goal was to reach new donors and reengage past donors. Next year, he said they hope more LGBT organizations led by and for people of color will participate. They raised $1,790.

“Our ability to raise so much in a 24-hour time period demonstrates that many are passionate about responding to the needs of Black and Latino/a LGBTQ people and generating more opportunities and resources for our population,” said Yarbrough.

The Theater Offensive Managing Director Adrian Budhu said the group raised $1,000 and one-third of Give OUT Day donors were first time donors to the organization.

“Yes, it’s a bit of a competition on the day of, but the community ties built are priceless,” said Budhu. “We also had great success with our e-blast program, and look forward to further developing our email and social media outreach, as well as our lists, thanks to what we learned on Give OUT Day 2013.”

NETA President Lillith Ponticelli said the event was an overall success and is already planning to participate next year.

“Give OUT Day helped NETA Inc. by exposure and cross platform network support and collaboration with other organizations providing services to the LGBTIQ community,” Ponticelli said.

Ellyn Ruthstrom, President of BRC, said they were happy to connect with new supporters and raised just over $500.

“We didn’t use a fundraising team this time but could try to use that component next year to see if we could improve the results,” said Ruthstrom.

Philip Finch, vice president of communications at Fenway Health, said they raised a modest amount of money and gained one new member of their Young Leaders Council. For next time, he said they would need to boost their publicity efforts to raise more.

“I think some of the organizations that were able to raise a significantly higher amount of money than we did had different strategies than we did,” said Finch. “I think we learned a lot from this and I think we can get a lot more out of it in the future if they choose to do it again next year.”

“It gave us national exposure and a lot of local exposure,” said Leventhal. “Because of that exposure, it raised awareness of partner abuse within our communities and we also made some money.”