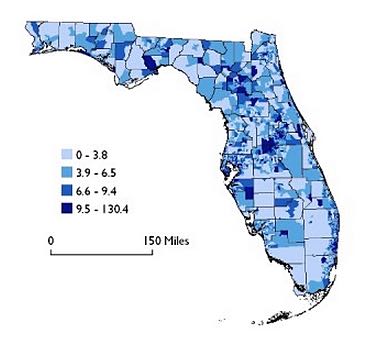 LOS ANGELES—About 328,000 LGBT workers in Florida are vulnerable to employment discrimination absent explicit statewide legal protections, according to a new report co-authored by Christy Mallory, Senior Counsel, and Brad Sears, Executive Director, at the UCLA School of Law’s Williams Institute. Currently, 31 counties and municipalities in Florida have ordinances prohibiting discrimination based on sexual orientation and gender identity in public and private sector employment, but about 46% of Florida’s workforce is not covered by these laws.

“A statewide law prohibiting employment discrimination based on sexual orientation and gender identity would bring new protections to thousands of workers without burdening courts and agencies,” Mallory said. “Most likely, the cost of handling complaints filed under the law could be absorbed into the existing enforcement system with no need for additional staff or resources.”

The report finds evidence of ongoing discrimination against LGBT people in Florida:

– A 2010 University of North Florida survey found that 63% of LGBT faculty and staff reported that they had experienced at least one incident of bias or harassment on campus because of their sexual orientation or gender identity.

– In response to a national 2010 survey, 81% of transgender people from Florida reported having experienced harassment or mistreatment at work, and 56% reported that they were fired, not hired, or denied a promotion because of their gender identity or expression.

– A 2013 survey conducted in Florida found that 73% of respondents supported passage of the Competitive Workforce Act, legislation that would have added protections from sexual orientation and gender identity discrimination to existing state law. In addition, other polls find that 80% of Florida residents think that LGBT people experience a moderate amount to a lot of discrimination in the state.

– Several recent instances of employment discrimination against LGBT people in Florida have been documented in the media and lawsuits; these include reports from a city manager, school employees, a lab technician, a hospital employee, an airline employee, and several employees in the service and hospitality sector.

– Survey data show that, nationally, 21% of LGBT respondents report being treated unfairly by an employer in hiring, pay, or promotions.  Among transgender survey respondents, 78% report having experienced harassment or mistreatment at work.

– In response to a national poll conducted in 2011, 78% of respondents from Florida said that employment discrimination based on sexual orientation and gender identity should be prohibited in the U.S.

A statewide law prohibiting discrimination based on sexual orientation and gender identity would not be burdensome or costly to enforce:

– The law would result in approximately 154 additional complaints being filed each year with the Florida Commission on Human Relations.

– The anticipated new complaints could most likely be absorbed into the existing system with no need for additional staff and negligible costs.

Findings from the Florida report are consistent with national data.

The Frivolist: 5 Ways To Experience Orlando (Mostly) For Free