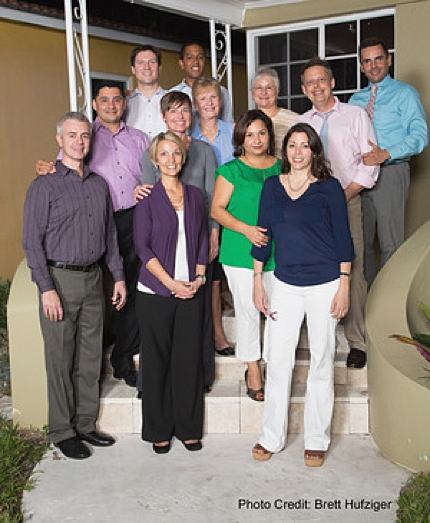 the six couples who, along with Equality Florida Institute, are plaintiffs in the lawsuit to overturn Florida’s ban on same-sex marriage.
Photo: Brett hufziger

They are represented by the law firm Carlton Fields Jorden Burt, Elizabeth F. Schwartz, Mary B. Meeks, and the National Center for Lesbian Rights (NCLR).Links:

About the Plaintiffs Catherina Pareto and Karla ArguelloCatherina Pareto and Karla Arguello have been together for 14 years. Catherina owns and operates a financial planning firm. Karla is a stay-at-home mother to their 15-month-old son.  Dr. Juan Carlos Rodriguez and David PriceDr. Juan Carlos Rodriguez and David Price have been together for nearly 18 years. Juan Carlos is a physician specializing in pulmonary medicine. David is the practice manager for Juan Carlos’s medical practice. They have twins, a boy and a girl, who are three years old. Said Juan Carlos: “David and I are devoted to our children. We are a family in every way, except that Florida will not allow us to marry. Being a doctor, I see people and families in crisis all the time. In those situations, family and the legal protections that come with it are critical. It pains David and me to be denied a basic safety net of legal protections.” Vanessa and Melanie AlenierVanessa and Melanie Alenier have been together for eight years. Vanessa is the assistant general manager of a national trade show and special event service provider. Melanie is an insurance agent. They have a 5-year-old son together. Said Vanessa: “Melanie and I have worked so hard to build and protect our family, but nothing can come close to matching the protections that marriage provides. Our family is in need of those protections just like other families. We want our son to understand that his family is secure and just as respected as any other family part of our community here in Florida.” Todd and Jeff DelmayTodd and Jeff Delmay have been together for 11 years. Todd and Jeff own and operate Delmay and Partners, a company that provides housing services for large events. They have one son, who is 4 years old. Said Jeff:  “Like all parents, making sure that our son is safe and secure is our top priority. Unfortunately, because the State of Florida will not allow us to get married we cannot provide the level of protections that opposite-sex married couples are able to give to their children. Beyond those critical protections, we want the opportunity to celebrate our love and commitment to one another in a wedding ceremony and have it mean something, which the state is currently denying us.” Summer Greene and Pamela FaerberSummer Greene and Pamela Faerber have been together for 25 years. Summer is a real estate agent. Pamela is a portrait artist. Summer and Pamela raised Pamela’s daughter from a prior marriage and now have two grandchildren, ages 10 and 17. Don Price Johnston and Jorge Isaias DiazDon Price Johnston and Jorge Isaias Diaz have been in a committed relationship for a year and recently got engaged. Don is an office manager at a Miami law firm, and Jorge is a paralegal at a Miami law firm. Said Jorge: “Both Don and I have very strong ties to Florida and cannot imagine getting married anywhere else. If we could marry, we would be legally recognized as a family and have all the same legal protections as others.” Equality Florida InstituteEquality Florida Institute is the state’s largest civil rights organization dedicated to securing full equality for Florida’s lesbian, gay, bisexual, and transgender (LGBT) community. The organization has many members throughout the state. Since its inception, the organization has represented the interests of LGBT Floridians through public education, coalition-building, advocacy and grassroots organizing. Equality Florida Institute also coordinates public education campaigns and events for policymakers, LGBT people, and the public at large on issues affecting the LGBT community. Equality Florida Institute members include many same-sex couples who long for the freedom to marry and would marry in Florida if Florida law permitted them to do so.