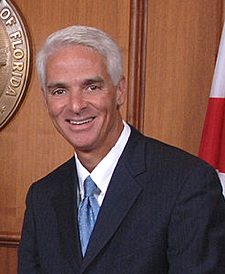 Former Florida Governor Charlie Crist has filed an amicus brief today in support of the marriage equality lawsuit Pareto v. Ruvin, which is set for a hearing on July 2 before Judge Sarah Zabel in the Eleventh Judicial Circuit Court in Miami.  (www.eqfl.org/crist)

Judge Zabel will hear from attorneys who filed a lawsuit in January on behalf of six same-sex couples and Equality Florida Institute. The lawsuit argues that Florida’s laws barring same-sex couples from marriage violate the United States Constitution by denying them the legal protections and equal dignity that having the freedom to marry provides.

An amicus brief, literally translated from Latin as a “friend of the court,” is a brief that may be filed by someone who is not a party to the litigation, but who believes that the court’s decision may affect its interest.

In the brief, Crist stated that as a former Governor and Attorney General who previously supported the ban, he is in a unique position to provide the court a perspective on why it is wrong, harmful to Florida and harmful to gay couples and children who are denied the protections only marriage provides.

Crist is among the fast growing majority of Floridians, 57% currently, who have come to support full marriage equality.

In filing, he joins the Mayors of Orlando and Miami Beach, who also filed amicus briefs earlier this week on behalf of their cities including arguments on how lifting the ban alleviates hardships for same-sex couples and provides numerous benefits for citizens and employees to live in a non-discriminatory environment.

In a major breakthrough nationally yesterday, the nation celebrated marriage equality victories in Indiana and Utah, which included the US 10th Circuit Court, with NCLR’s Shannon Minter as lead counsel.  Minter is also a lead counsel in Pareto v. Ruvin.

“In just the last six years, our society has evolved and moved past the prejudices rooted in our past.  Further, science has uniformly reached the conclusion that heterosexual marriages are just as valued and revered as they have ever been; and children raised by gay and lesbian parents fare just as well as kids raised in straight families.

“Thus, with the arc of history now, in fact, bending toward justice, this issue of marriage equality will almost certainly not even be an issue for the children and grandchildren of this State. But it is still the duty of those in the present to recognize that the legitimacy of government depends upon its willingness to fairly, transparently, and equitably administer the law. That goal is frustrated by denying an entire class of citizens equality in the institution of marriage simply because of who they are and whom they love.”