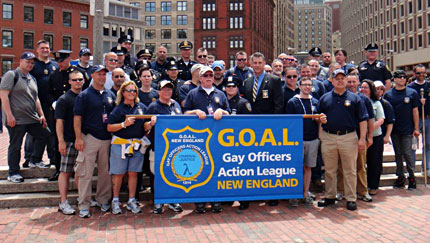 The New England chapter was started by Officer Preston Horton of the Northampton, Mass. Police Department (currently a sergeant with the M.B.T.A. Police Department) as well as other officers after Horton worked with G.O.A.L. New York (founded in 1982). [pullquote]It is a support group for gay, lesbian, bisexual and transgender sworn public safety officers as well as civilian employees of federal, state and local agencies.[/pullquote]

Anthony Imperioso, police officer and president of G.O.A.L New England, said the group has developed a strong working relationship with other LGBTQ public safety organizations around the country.

“Some of the more important services that we provide are professional training on GLBTQ issues in police and fire departments as well as police and fire academies,” said Imperioso. “In the year 2013 alone, G.O.A.L. has done more visibility at Pride events and held more membership events than ever before. We reach out into the community, for example, and have a team of volunteers at Harbor to the Bay Charity Bike Ride for HIV/AIDS services. We have recently become a 501(c) (3) non-profit.”

The group not only supports its members, but also provides support and training to the entire public safety community throughout New England, serving as a forum for members to share knowledge and experience and find solutions to problems that members and agencies face. In particular, the group has supported members struggling with issues such as coming out at work.

“The difficulty varies from department to department,” Imperioso said. “For example, in larger cities, it is, in my opinion much easier. The cities and their respective departments offer greater diversity within the department as well as within the communities they serve. However, even in smaller or more rural areas one must remember that this is New England and a distinctive part of the U.S. in that it is generally more accepted. Even from a political standpoint, both parties have been more or less more supportive over the years.”

David McClelland, vice president of G.O.A.L. New England, said he recently retired after 32 years with Boston Emergency Medical Services and described his experience there as “nothing but positive and truly familial.”

“We all have dysfunction within the family from time to time, but it is worked out and in the end we are all a loving family,” McClelland said.

McClelland shared that it was not difficult for him to come out at work.

“I was just myself,” said McClelland. “I believe respect from your coworkers is earned and should not need to be demanded. You do your job to the best of your ability and there should be no problem.”

Both Imperioso and McClelland said that things have changed for the better for LGBTQ police officers.

“While there are still challenges here and there, I believe the general public as well as the general workforce has become more welcoming and accepting of my LGBTQ brothers and sisters,” McClelland said.

Imperioso said the constituency of the group is made up of gay men and women as well as transgender public safety professionals, some of whom are out while others are not.

“Transgender issues need much work in terms of understanding and acceptance within society, even within the GLBTQ community itself and obviously law enforcement,” said Imperioso. “I would give huge credit to Boston Police Commissioner Edward Davis and his GLBTQ Liaison Javier Pagan for his department developing a policy that deals with transgender issues in the City of Boston, one of the only major cities in North America with such a policy.”

Decision.Gay: Is the Gay Community Being Jilted in the Race for .Gay?

Op-Ed: Only by Knowing Ourselves and Being Out, Can We Create Change