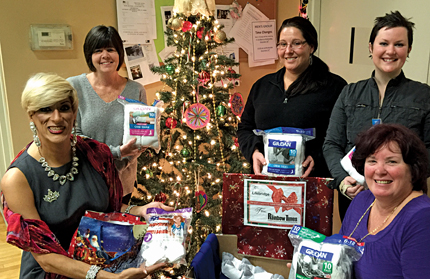 “We see a large population of young LGBT youth out there,” said Ann Richardson, Lifebridge Thrift Shop manager. “I know there are a lot of homeless LGBT people [in the area] that don’t necessarily come in to the shelter, but need a meal.”

And so the idea was born.

Five years ago, Gigi Gill, long-time community LGBT activist and volunteer of Over the Rainbow Supper Club, spearheaded a local Salem-based program to host dinner gatherings for LGBT Seniors and allies residing on the north shore. Affectionately known as the “Official Queen of Salem: Duchess Gigi,” Gill has spent countless hours advocating on behalf of those often left without a voice.

“It is time to expand Over the Rainbow to also include an LGBT lunch program for those in need. Simply put, the need is there,” she said.

“[Currently] we serve lunch to anyone who wants to come in,” said Debbie Barber, Senior Warden, St. Peter – San Pedro Episcopal Church. “We serve lunch at noontime on Wednesday and there’s no charge. After lunch, we do a prayer service. If you want you stay, you stay, but there’s no attachment to it. We’ve been doing that for about two months now and it’s started to really take off now.”

However, Gill and Barber agree that there is a unique need to specifically serve the LGBT and allied community. The program will rely on community support to make it equally successful.

“The weekly Wednesday lunches we are doing now are supported through donations,” Barber said. “People donate their time, they donate their food, and they take turns putting the lunch on.”

It really does take a village, Gill explained.

“What’s good is that there is a group of ladies that run the kitchen there [St. Peter – San Pedro’s Church], they all volunteer and they love to cook,” Gill said. “So, you get 6-8 ladies who will bring in one party platter of food, with up to eight different dinners to serve. It works out really well.”

However, support of the city’s homeless does not end with meal programs. Last month on behalf of Over the Rainbow, Gill, Barber of St. Peter – San Pedro and The Rainbow Times (TRT), presented a large donation of hundreds of socks to Lifebridge to help the city’s homeless population survive the New England winter.

“When I talked to Ann about needs, she always told me the hardest thing for the homeless is to keep their feet warm, dry and healthy,” Gill said.

Giving back is how TRT “pays it forward,” according to Nicole Lashomb, Editor & Co-Founder of TRT.

“When we learned about Lifebridge’s critical need for socks, we knew we had a responsibility to help the most vulnerable among us,” said Lashomb. “A large part of the work that we do is focused on providing assistance, whether in-kind or monetary, to advance human interest causes. We believe that we have an obligation to assist and care for those who need it most.”

According to Richardson, Life Bridge’s Thrift shop offers a vouchers to the clients they serve. With that voucher, they can get a coat, socks, and whatever else they need.

Valerie Sweeney, Clinical Manager for the shelter explained how the outcome of serious health issues could be impacted by as something as simple as clean socks.

“There are a lot of diabetics on the streets and they are non-compliant because they have no other choice for meal options, just the ones available to them [through programs],” Sweeney said. “[The menu] it is really carb heavy and not diabetic friendly, so I see a lot of sores and a lot of complications from the disease. Clean socks are a valued necessity. People can literally loose their feet.”

Lifebridge is an inclusive shelter and mission that serves some of the areas’ homeless LGBT population, including the transgender community.

“The acceptance here is astounding,” said Sweeney. “There is no judgment and they [the LGBT clients] thrive.”

“The whole connection here is that the LGBT community is giving back to the [Lifebridge] mission in a way that it brings [LGBT] awareness while also serving the community through a lunch program and inviting others to participate too,” Gill said.

To learn more about Lifebridge or to find out how you can get involved, please visit www.lifebridgesalem.org. To participate in Over the Rainbow Coalition’s LGBT Senior Dinner gatherings, check out their Facebook page at /overtherainbowcoalition. To learn more about St. Peter – San Pedro Episcopal Church and the LGBT lunch program, visit www.stpeterssalem.org.

1 Comment on "Gay Community Gives Back to Salem: LGBT Lunch Program to Kick-Off in 2016"