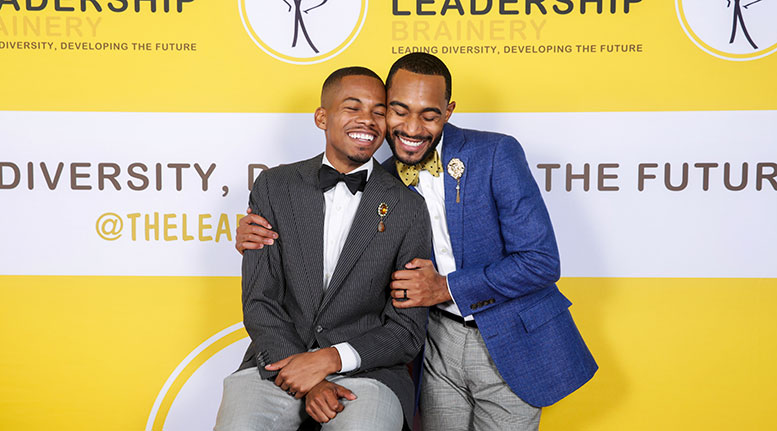 Derrick Young Jr., 25, and Jonathan Allen, 28, have a fairy tale love story that took the internet by storm when their engagement went viral in October 2017. The Rainbow Times interviewed the couple to learn more about how they met, their engagement, and their pending nuptials.

TRT: Could you start off by telling us what your backgrounds are?

DY: I was born in Chicago and raised in Kansas City, Mo. with my parents and two siblings. I was a quiet yet popular kid who loved to learn and create. You would either catch me in my room creating something or at work creating something. We were a moderately religious family that definitely condemned homosexuality. My dad approached me about my sexuality at age 16 and it pole-vaulted my coming out. I began to openly embed myself in the gay scene more frequently. One thing many people do not know about me is that I’ve walked in a few gay balls back in my day. As a teenager who could sense the [discomfort] in my parents after I came out, I felt embraced by the gay community.

JA: I was born in Lufkin, a small town in East Texas. I grew up in a very religious family; often in church multiple days a week. But, we were certainly just as much secular. I was also very engaged in my community and leadership in school. I have always felt called to serve and be a voice and light for the hopeless. I preached my first sermon at age 11, was licensed at 14, and ordained at 20. Growing up I did everything I could to hide the fact that I was attracted to men.  Much of my teens and twenties have been spent reconciling my identity with societal expectations and my religious beliefs. When I finally came out at 25 to my family and friends, I made a decision to love my life. What’s so incredible is that I get to be on this journey with Derrick, who brings tremendous love and strength [to] my life.

TRT: How did you two meet one another?

DY: We met in 2012 at the T.H. Harris Auditorium during election week at Grambling State University. Jonathan was running for student body president, and I was managing a young lady’s campaign—a different position of course. After the big debate, I noticed something in Jonathan’s campaign that could have led to him getting disqualified. I approached him about it and after resolving the problem, he asked me for my number. I thought nothing of it at the time because it was just work, and he was apparently the best man for the job. He invited me to his campaign meeting that night, and I couldn’t make it, so we met after elections the next day. He won, my candidate won, and we won each other. We’ve been going strong since that day, but we haven’t always been how we are. Jonathan and I spent the first four years of our relationship closeted. Our love was divined, but we struggled individually with many personal and social traumas resulting from our sexuality as two black men in the south, one who is an ordained minister.

TRT: Take us back to the day you got engaged. What was that day like, from each of your perspectives?

JA: Engagement day was super exciting and frustrating at the same time. The day was planned as part of our annual photo shoot. I had it all planned out with the help of my friends. Derrick and I would go to the Boston Commons to take casual photos and then change into suits at a friend’s nearby apartment on Newbury Street. Then the photographer would suggest a change of scenery, and we head to the Harvard Arboretum where our friends would be behind trees and bushes waiting to celebrate with Derrick and me. All of this happened, but not without life and Mother Nature intervening. It rained the entire morning for the first half of the photo shoot. I was utterly paranoid and unraveled because the other special surprise was that one of our friends would play our song, So Amazing, on the violin. However, she would have been unable to play the violin in the rain. As we were arriving at the location, the clouds began to part, and the sun started to shine brightly. It was like God was with us!

DY: Our engagement was very interesting and exciting. I noticed something strange with Jonathan a few weeks before, so I spoke with my friend about it. She deterred my thoughts exceptionally well, which now I know why. It was our annual photo shoot, and it was one of the rainiest and grayest days I can remember. Jonathan was starting to get frustrated, and I remember saying to him, “It’s okay, people do photoshoots in the rain all the time so let’s make it pop.” I didn’t know it was because he was planning to propose in the grass an hour later with his good suit on. However, as we drove to the next destination, Harvard Arboretum—one of my most favorite spots in Boston—the rain stopped entirely and the sun shined like never before. After he proposed, I was stuck. Not only did he bring Tiffany, a violinist I fell in love with months earlier, but he also brought my sister from Missouri … I’m so happy I was able to spend that moment with people who have been a part of our journey during many different elements.

TRT: Could you describe what your life is like now?

DY: Life is great. We’re in a very transformative time in our individual and collective lives. We value bringing change and positivity into people’s lives, and we’re doing that more and more. We currently live in Boston! We appreciate what Boston has provided us over the past four years and we’re honored to serve this community. Jonathan is finishing his last semester at Boston University School of Law. Derrick is the executive director of our non-profit, The Leadership Brainery. The organization’s unprecedented National Ambassador Fellowship funnels underrepresented, yet extraordinary college student leaders into various fields including law, health, tech, and the arts.  First-generation and diverse college student leaders—who we call “Ambassadors”—are selected amongst a pool of nominated rising sophomores. One ambassador is chosen from each state, including Washington D.C. and Puerto Rico, to create an essential network of different representations and perspectives. During the three-year fellowship, we focus on long-term personal, professional, and leadership development and preparation for graduate and professional school. Once our ambassadors graduate college, they will be prepared to enter top graduate and professional schools and make change for the greater good.

TRT: What’s the top piece of advice that you have for those who may be single and looking for love?

DY: It’s okay to have expectations, but don’t expect perfection. It’s essential that we each take time to find the humanity within ourselves before we properly deal with the humanity of someone else. A genuine merger of two people cannot be foreseen or planned, and neither is it easy. Focus on self-love and being your best self, and the purposed time will come.

TRT: What’s the top piece of advice that you have for those who are in a relationship and are looking to keep it exciting and intimate?