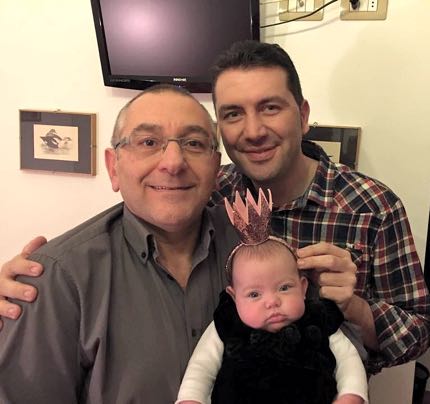 Fashion designer Domenico Dolce proved his good taste stops at the edge of the runway when he told Italian magazine Panorama that “children of chemistry” (more commonly known as children born through surrogacy) are “synthetic children.” His comments sparked an international uproar; Elton John, whose own sons were born to a surrogate, led a boycott against the Dolce & Gabbana brand. Yet in Dolce’s native Italy, his opinion that “the only family is the traditional one” is no extremist position. Rather, it’s one that’s entrenched in law, with both surrogacy and gay adoption illegal in Italy.

“Surrogacy is such a taboo topic in Europe,” Claudio Rossi Marcelli, the author of “Hello Daddy!”, about how he and his partner Manlio Sanna welcomed twin girls through an American surrogate, told GayswithKids.com. “It’s always very theoretical: about principles, about ethics, moral issues. But when you put faces onto people, it all becomes more human. People change their minds so quickly.” [pullquote]His comments sparked an international uproar; Elton John, whose own sons were born to a surrogate, led a boycott against the Dolce & Gabbana brand.[/pullquote]

Luigi Codecasa agrees. When he welcomed his twins Pietro and Silvia, 7, the Milan-based doctor was delighted at the way his community rallied behind his new family. Codecasa recalls showing his local baker the sonogram of his two children, who were conceived with a lesbian friend. The baker was shocked that a gay man would have children, Codecasa says, but today, Pietro and Silvia are her little VIPs.

“She is always inviting them to the back of the shop and giving them pizzas or croissants for free,” he says proudly. “It’s the same in the street market. Both the butcher and the grocer go crazy for the kids.” The butcher’s wife even confided in Codecasa that she had conceived through artificial insemination. “I can tell you because I know you will understand me,” she said.

Through Papà Arcobaleno, Codecasa met Andrea Lorenzato, a 36-year-old sales rep and new father to an 8-month-old baby girl. Lorenzato agrees that Italian law is out of step with the spirit of the people. “The community is behaving differently than what the law says,” he notes. Along with his partner, Francesco Ineppo, he is a new father to an 8-month-old baby girl, Teresa, whom they welcomed through a surrogate. This April, Teresa will be baptized in a Catholic church. “The law of the church could say that they don’t approve of gay people,” Lorenzato says. “But at the end of the day no one is going to tell you, ‘I am not going to respect this little baby.’”

Despite the momentum in the streets, the Italian government, currently lead by centre-left Prime Minister Matteo Renzi, hasn’t budged when it comes to updating laws for gay families. “Italians have zero civic sense,” Marcelli says. “That’s why the country is such a mess. Everyone is about their own interests. Even if they are personally okay with being gay and being a gay parent they don’t go out and make it a political statement. So the political parties don’t feel that urge to put it in the political agenda.”

Even then it’s a minefield of legal loopholes and prohibitive expenses. Lorenzato and Ineppo immediately struck countries such as India, Thailand and China from their lists when searching for a surrogate because of concerns surrounding how the women might be treated. “We didn’t want this journey to create sadness for someone else,” Lorenzato says. They were looking closely at the Philippines, but backed off at the advice of a lawyer. “There was the possibility that one day the mother of this baby could wake up and say, ‘I want this baby back, give me money,’” he says. “And this was not a solution that we could consider.”

Like many gay Italians looking to become parents, they ultimately found their surrogate in California. Teresa was conceived on their first try and had a perfectly healthy gestation. Then, three months before her due date, the daddies-to-be received a text from their surrogate’s husband. “We are in the hospital. The baby will be born in three hours by C-section. Come here.”

They were on the first plane out of Venice the next morning, and when they arrived at the hospital in Redwoods, Calif., they found a child fighting for her life. “You see this very little baby with all these tubes, all these computers and machines around her,” Lorenzato remembers. The couple tried to prepare themselves for the worst, telling each other, “We’ve survived so far without this baby.” “But it’s impossible,” Lorenzato says, “because your heart is inside that crib.”

Teresa was in the hospital for two months before she was well enough to travel back to Lorenzato and Ineppo’s home in Vicenza, 45 minutes west of Venice. Today, she is a model child. “She’s sleeping all night from 8 o’clock in the evening to 6 o’clock in the morning,” Lorenzato says. “So far she’s so good. We are expecting her to wake up one day and say, I am going to make your life a nightmare.”

Surrogacy is not an option for everyone, however. “Unfortunately there’s an economic aspect to the situation that doesn’t allow all gay couples to become dads,” he says. Expenses for an international couple using a California surrogate can range from $70,000 to more than $91,000 (not including insurance). Fees cover everything from psychological screening to agency fees to a housekeeping allowance for the surrogate.

Co-parenting is another option. Codecasa was lucky enough to meet Alessendra di Minno, a gay woman who was also dreaming of having a child. They spent three months getting to know each other, discussing their views on everything from religion to education before they agreed to try to conceive a child they could co-parent.

For five years they tried what Codecasa calls their “homemade attempts,” with a turkey baster. They also saw a doctor for artificial insemination. They finally conceived on Christmas Day and on August 15 welcomed not one but two babies: Pietro and Silvia. Today di Minno and Codecasa take turns co-parenting: the children’s permanent residence is with their biological mother, but they spend Wednesday nights and one afternoon a week with Codecasa in between soccer practices and gymnastics classes, as well as every other weekend.

Despite what Dolce voiced about “traditional families,” Marcelli believes it’s precisely because family values are so entrenched in the culture that Italians are more willing to embrace gay parents in their communities. “Paradoxically, it’s even easier to be gay parents than a gay couple,” says Marcelli. “When you have kids you can show your neighbours that their lifestyle is so similar to yours. When you have kids, the schools, the doctors, they welcome you into the family club.”

“I always felt that the lack of a legislation over the legal status of our family gave me a lot of power over the legal status of our kids,” he says. “I always told Manlio, ‘One day I could just freak out and decide I don’t want to see you anymore. I have the power to keep these girls from you.’ I always felt this was really disproportionate. When it was the second time around I said, ‘Let’s make you the legal father of this third kid so we’re all tangled and creating a guarantee.’ It’s kind of a weird thought because you don’t want to think about the worst.”

However, the issue highlights why it is so important for parental rights not only to be informally recognized by knowing neighbors, but also to be enshrined in law. “They say that the real fight for gay marriage is the fight for gay divorce,” Marcelli says. “When all of a sudden things go wrong you need the law to protect you from becoming the worst part of you.”

If only Domenico Dolce had a law like that to protect his foot from getting stuck in his mouth.

Fatherhood, A Journey For Gay, Bi, And Trans Dads