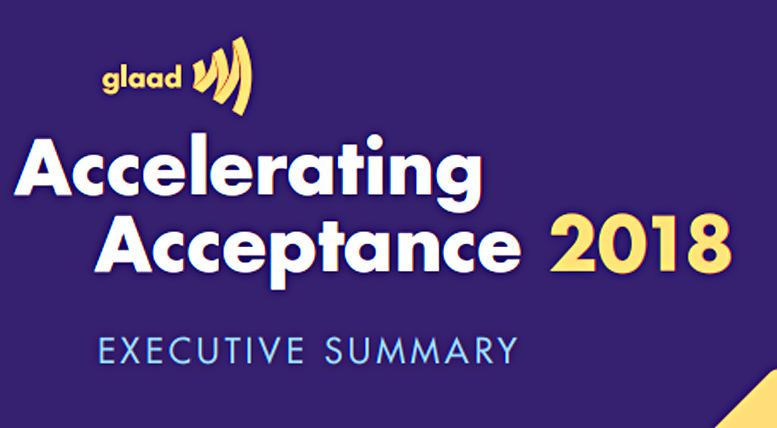 DAVOS, Switzerland—On Jan. 25, GLAAD, the world’s largest lesbian, gay, bisexual, transgender, and queer (LGBTQ) media advocacy organization, announced the findings of its fourth annual Accelerating Acceptance report, a national survey among more than 2,100 U.S. adults conducted on GLAAD’s behalf by The Harris Poll. The results were announced during a panel discussion hosted by GLAAD and The Ariadne Getty Foundation at the World Economic Forum in Davos, Switzerland.

For the first time in the report’s history, GLAAD and The Harris Poll found a drop in acceptance of LGBTQ people. As President Trump prepares to address the heads of state, business leaders, and largest philanthropists at the World Economic Forum Annual Meeting, GLAAD is on the ground in Davos to shine the spotlight on the rollback of LGBTQ acceptance, debut new initiatives, and be the lead voice for LGBTQ people around the globe.

“In the past year, there has been a swift and alarming erosion of acceptance which can only be fought by being visible and vocal,” said GLAAD President and CEO Sarah Kate Ellis. “This report puts numbers to the bias that too many LGBTQ Americans have recently experienced. GLAAD is fighting the rollback by enlisting philanthropic leaders like the Ariadne Getty Foundation and global changemakers attending the World Economic Forum to use their platforms and move our community forward.”

GLAAD also announced a $15 million lead gift from the Ariadne Getty Foundation to fund part of the GLAAD Media Institute’s launch along with investments in LGBTQ ventures, including media and small businesses, that create social impact worldwide and accelerate acceptance.

GLAAD and The Harris Poll’s Accelerating Acceptance report, which measures American attitudes toward LGBTQ people and issues, shows a dramatic drop in the number of non-LGBTQ U.S. adults who were “very” or “somewhat” comfortable with LGBTQ people.

“An unseen casualty of a tumultuous year has been the LGBTQ community,” said John Gerzema, CEO of The Harris Poll. “In a single year, we’ve seen significant declines from what had been an increasingly accepting America to one now less supportive. And this lost ground of acceptance cuts across many in American society.”

To combat the rising threats to LGBTQ acceptance, GLAAD launched the GLAAD Media Institute today during a panel discussion at the World Economic Forum in Davos, Switzerland. The Institute is a groundbreaking new training, consulting, and research venture that builds upon and furthers GLAAD’s successful legacy of leveraging media, business, and cultural institutions to effect positive change with advocates around the world.

The Ariadne Getty Foundation is a founding partner of the GLAAD Media Institute and announced a $15 million pledge to build the Institute as well as advance GLAAD’s work to invest in LGBTQ ventures, including media and small businesses, that have social impact worldwide.

“The time is now for world leaders and all of us to stand by marginalized communities and promote equality and diversity,” said Ari Getty, President of the Ariadne Getty Foundation and current member of GLAAD’s Board of Directors. “GLAAD has always been the leader in creating a better world for LGBTQ people. This lead gift will not only ensure that work continues, but will hopefully inspire others to join us in our pursuit of 100 percent acceptance.”

Ari Getty continued: “My family has long stood alongside individuals who are too often left behind as social justice progresses. Now more than ever we must join hands and raise our voices to combat oppression and move forward towards a world of equality, regardless of gender, race, sexual orientation, geography, or creed.”

The Foundation, under the leadership of Ari Getty, improves the lived experiences of marginalized individuals and communities through large-scale investments and hands-on advocacy.

“This important lead gift continues Ari’s legacy of strategic philanthropy to improve the lives of countless people around the world,” said GLAAD President and CEO Sarah Kate Ellis. “We will not stop until there is 100 percent LGBTQ acceptance everywhere. Though these results show the tide is turning against LGBTQ people, this critical lead gift will enable GLAAD to both leverage the media to change the world, and invest in the best storytelling to bring to life the importance and value of achieving 100 percent LGBTQ acceptance.”

Research Method
The fourth annual Accelerating Acceptance survey was conducted by GLAAD and The Harris Poll among a nationally representative sample of 2,160 US adults of whom 1,897 are classified as non LGBTQ adults.  The online survey was administered November 16-20, 2017.

About The Harris Poll
The Harris Poll is one of the longest running surveys in the U.S. tracking public opinion, motivations and social sentiment since 1963 that is now part of Harris Insights & Analytics, a global consulting and market research firm that delivers social intelligence for transformational times. We work with clients in three primary areas; building twenty-first-century corporate reputation, crafting brand strategy and performance tracking, and earning organic media through public relations research. Our mission is to provide insights and advisory to help leaders make the best decisions possible. To learn more, please visit www.harrisinsights.com and connect with The Harris Poll on Twitter and LinkedIn.

GLAAD rewrites the script for LGBTQ acceptance. As a dynamic media force, GLAAD tackles tough issues to shape the narrative and provoke dialogue that leads to cultural change. GLAAD protects all that has been accomplished and creates a world where everyone can live the life they love. For more information, please visit www.glaad.org or connect with GLAAD on Facebook and Twitter.