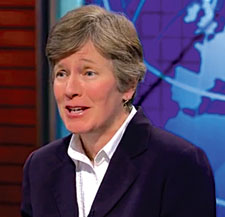 Yesterday, I had the tremendous privilege of standing up in our nation’s highest court to make the case for the full dignity and humanity of our community.

So many have done so much to get us to this moment – every bit of it has mattered enormously. Your stories, your work, your courage, and your support of GLAD, and of me, have provided me not only the resources, but the inspiration and the confidence to go into U.S. Supreme Court knowing I was arguing on the side of justice.

What I carried with me throughout the argument yesterday is that the real heart of this issue always, every day, is real people. People who love one another, have committed to one another, who want to make that commitment a legal one and take responsibility for one another.

It was my honor to represent three such families to the Court yesterday: April, Jayne, and their children, from Michigan, and from Kentucky, Tim and Larry, and Maurice and Dominique. It is their courageous challenges to their states’ marriage bans that propelled the Court to consider the question of the freedom to marry for all those still denied it today.

It was yet another honor to have with me in D.C. plaintiffs from two of our landmark marriage cases, Mike Horgan and Ed Balmelli, Julie Goodridge, and Janet Peck and Carol Conklin.

It is remarkable to have arrived at the moment when the U.S. government itself would be standing with us. But yesterday, U.S. Solicitor General Donald Verilli Jr. did just that, making a passionate and eloquent case in favor of our right to marry. And Douglas Hallward-Driemeier likewise gave a cogent and powerful argument for why states cannot be permitted to deny recognition of marriages lawfully entered into elsewhere.

Both inside the courtroom and out were many talented colleagues from our partner organizations, as well as the dedicated private attorneys who have devoted themselves to this case and every case before that has brought us to this moment.

I am humbled by the incredible opportunity to stand on the shoulders of so many who have worked, and continue to work going forward, so tirelessly in this movement.

And I am grateful for the chance to have made the case for something that is not only right and just, but is obviously very personal to me as my spouse Jenny and our two daughters were watching in the courtroom. And all of the couples, individuals and families I have had the honor to work with the past twenty-five years, who have become friends, become part of my community – they were with me, too.

I cannot say with certainty what the Court will decide, and we aren’t likely to know before the end of June.

But I left Court yesterday buoyed by this community, and by confidence in the rightness of our argument, satisfaction that the Justices have given us a fair hearing, and faith that it is the true intention of our Constitution to provide equal treatment and protection to all of our nation’s citizens.