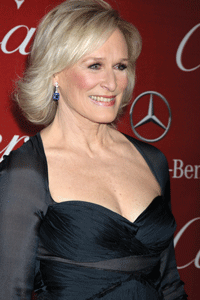 Glenn Close in her Gender-Bending role in Albert Nobbs.

Man, Glenn Close feels like a woman, but she sure doesn’t look like one in her new gender-bending movie. In Albert Nobbs, the actress – known especially to gay audiences for her role in the 1995 film Serving in Silence: The Margarethe Cammermeyer Story, about a real-life lesbian soldier – drops her voice a few notches, wears a top hat and wraps her torso in a girdle, all to keep her job while living in late-19th-century Ireland.

Recently nominated for an Oscar, the role – originated by Close on stage nearly 30 years ago – also earned her a Golden Globe nomination. Nods also went to costar Janet McTeer for playing Hubert, a cross-dressing lesbian who’s living the life that Albert so desperately wants.

In a recent one-on-one, Close revealed her proudest part of the film, how she thinks Albert identifies sexually and looked back at her unexpected bisexual role on Will & Grace.

Chris Azzopardi: How was it getting in touch with your masculine side?

Glenn Close: (Laughs) It’s funny, because I never think of Albert as a man. I always thought of her, even as Albert, as a woman, kind of wearing a mask. As far as getting in touch with her movement and her voice and all that, I would think back on the reality of what she must have gone through when she first had the idea to disappear as a waiter. The shoes would’ve been too heavy and too big, the pants would’ve been too long. Waiters in Victorian times who were very formal weren’t supposed to look anybody in the eye – they were seen, not heard – and so she couldn’t have chosen a better way to disappear.

Q: People aren’t sure how to define Albert Nobbs. I’ve heard both transgender and lesbian used to describe her. What do you think?

A: I don’t think she is either, and that’s what fascinates me about this character. She disappeared when she was 14 and she emerges 30 years later. She’s never been in a home, she’s never had any intimate human contact, and she’s never been loved by someone. Everything, in a way, is new and unexplored. She does not have, when you first see her, a hugely active regretful longing in her life. She counts her money, she wants to be left alone, she wants to have the security of her job so that she won’t end up on the street – and that’s fine with her. She’s lower-class and working, and it’s only when Hubert comes into her life and she’s revealed that – first of all, she fears life as she knows it ending, but when she hears Hubert’s story, naturally, she thinks, “Can I do that?” But she doesn’t have the tools; she just doesn’t. Hubert’s one mistake is that she thinks Albert is much more capable of forging a life, but she just isn’t.

Q: One of the best lines in the film comes from Hubert, who tells Albert that “you can be whoever you are.” That’s such a powerful mantra for all of us, but the gay community can definitely relate. What effect do you hope that line, and this film, has on the LGBT community?

A: I hope that line makes them really happy. You’re absolutely right to pick out that line, because it comes after a scene where Albert, in the dress, realizes that’s not who she is either – and that’s when Hubert says, “Albert, you can be whoever you are. Look what you’ve done.” It’s a wonderful moment.

Q: What about the film, and the role of Albert Nobbs, makes you most proud?

A: Moments in the movie when I think people honestly forget what they’re looking at. It’s not two gay men and one confused other woman; it’s two people in a loving and passionate relationship, being kind to a third person. And gender really, at that point, doesn’t matter. I know that it does matter, but in some ways, if you look at it from some angles, gender should be irrelevant. People should be able to love whoever they have that safety and connection with. That’s a basic human need. And that’s what Albert takes on. What she longs for is that sitting room. Those two chairs in front of the fire represent everything that she wants. And it’s basically a safe place with someone across the room. It’s as simple as that.

Q: The film, though it’s set in a different time period, is still very relevant to how people nowadays are resisting labels and gender identity. People no longer want to be called gay and lesbian. Queer is now being embraced. Do you see parallels between the film’s resistance of labels and the LGBT community?

A: Absolutely. I always have. I think it’s why this simple story is so powerful. What Janet brought to the part of Hubert is absolutely fantastic, because Hubert defies labels. She doesn’t care about labels. She’s happy with being Hubert, and it’s a great thing to see. No big deals made out of it. But here’s somebody who, even though she has to masquerade as a man, is actually who she is. She’s comfortable with that.

Q: Let’s talk about all the gay cred you have – and not just with Albert Nobbs. You played a lesbian soldier, and kissed Judy Davis, in Serving in Silence: The Margarethe Cammermeyer Story. But you also dry humped Debra Messing on Will & Grace.

Q: I didn’t forget about that, Glenn.

A: Too funny. I went out there thinking I was going to be a marriage counselor. They said, “No, no – you’re going to be this bisexual international photographer.” And I go, “Oh, OK!”

Q: You know, many consider you a dykon. When did you first feel embraced by the gay community?

I started this organization to fight stigma around mental illness, and that’s one kind of frontier.

Q: With the repeal of “Don’t Ask, Don’t Tell,” how do you reflect on your role in Serving in Silence and the progress gay people have made in the military?

A: Incredible. I was in touch with Margarethe Cammermeyer when it happened, and we saw it back, what the situation was when we made that movie, and it was amazing. It didn’t ruin her life but it certainly stopped her life on a trajectory that she wanted it to go on – she wanted to be a general and that’s a loss. She was a great soldier. She was remarkable. So I’m very proud of that. I was honored to try to walk a little bit in her shoes, which was impossible. But I’m very proud.

Q: And that kiss: I remember you saying that for 30 seconds you felt what it was like to be attracted to the same sex.

Q: If you weren’t an actress, do you think you would’ve ever been inclined to see what that felt like?

A: Oh lord. I don’t know. That’s hard. Obviously it depends on the individual. I can’t answer that. If I wasn’t an actress, I don’t know what kind of life I’d have.