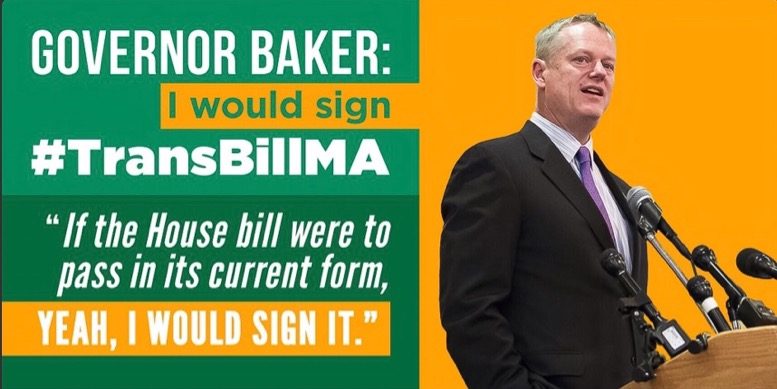 BOSTON—Today, after months of not addressing the media about the transgender anti-discrimination bill, the Boston Globe published an article in which MA Governor Charlie Baker said exactly what thousands of Trans Bay Staters were hoping to hear long time ago: that he would sign the bill (House Bill 4343) once it reaches his desk.

There was immediate reaction via Twitter and MassEquality Executive Director Deborah Shields, JD, MPH made the following comment in response to the announcement.

“We are thrilled that, on the eve of the House of Representatives’ vote on HB 4343, the transgender anti-discrimination bill, Governor Baker has announced that he would sign the bill when it reaches his desk. He chose a critical time to make his announcement of support, and we’re very grateful for it.

“We anticipate that the House will pass its version of the bill tomorrow, and that the language in the final version of the bill will ensure that transgender people in Massachusetts have the same rights to enjoy access to public spaces without harassment or discrimination as everyone else. This is a big step forward for equality, dignity and fairness in Massachusetts.”

The ACLU of Massachusetts also released a statement.

We appreciate Governor Baker’s confirmation that he will sign the transgender anti-discrimination bill as it currently stands in the House. The Governor’s statement is encouraging as we head into tomorrow’s House vote and we hope our state representatives will follow suit by voting in favor of full equality for transgender Bay Staters.

Tomorrow at 11 a.m. HB 4343 (#TransBillMA) will come up for a vote in the House. Read myths associated with this bill here.

[From staff and a News Release]

Below are some Twitter reactions to the Governor’s words:

Huge news: @CharlieBakerMA would sign #TransBillMA into law! Make sure he can- tell your state rep to vote YES tmrw: https://t.co/Wo71TOAfjp

It's not often I get political on here, but I'm very proud of my state and governor today. #TransBillMA https://t.co/MazyMssQ7b

Thanks Gov @CharlieBakerMA for standing with the majority of Bay Staters who agree it's time to pass #TransBillMA! pic.twitter.com/eo6eoPUJ99