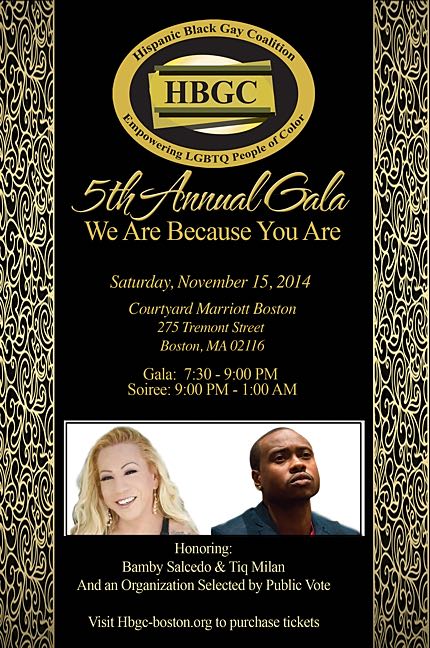 BOSTON, Mass.—The Hispanic Black Gay Coalition (HBGC) will host its annual gala and soiree on Saturday, November 15, from 7:30 p.m. to 1:00 a.m. at the Courtyard Marriott located at 275 Tremont Street in Boston, MA. The community-oriented celebration will mark five years for the organization, which started as a grassroots response to the lack of visibility, resources, and services for Black, Hispanic, and Latin@ LGBTQ individuals in the Greater Boston area.

Highlights for the evening will include a pre-reception with special guests, an award ceremony honoring individuals working to empower LGBTQ communities of color, a silent auction, testimonials from HBGC program participants, and a dance party with DJ Lady Spindrift. [pullquote]Receiving the James Earl Hardy Legends Award will be Bamby Salcedo. The award recognizes a trendsetting activist who has impacted LGBTQ communities of color for more than 10 years.[/pullquote]

In 2014, HBGC deepened its programs to continue addressing the diverse and intersecting needs of Black and Latin@ LGBTQ individuals. Recently, the organization hosted its 4th Annual Youth Empowerment Conference, the largest gathering of LGBTQ youth of color and their allies in New England. The organization also remained committed to youth and young adult development through expanding its work with Gay-Straight Alliances (GSAs) and completing another wave of its New Leaders Institute, a program where youth attend a series of leadership development and social justice trainings that culminate in the implementation of community-wide projects and campaigns. As a testament to the effectiveness of its work, HBGC was awarded a grant from the Queer Youth Fund, a competitive national initiative of the Liberty Hill Foundation.

HBGC also used the year to strengthen partnerships with local agencies to respond to social disparities that adversely impact Black and Latin@ LGBTQ people. These efforts included the launch of My Brother’s Keeper, a monthly discussion group co-hosted with AIDS Action Committee. The group seeks to build a healthier gay, bi, MSM, trans*, and questioning men-of-color community by bringing visibility to the unique experiences of GBTQ men of color and supporting individuals in accessing community resources, social support, and health services. HBGC also collaborated this year with the Urban League of Eastern Massachusetts to host a community forum on gentrification and launched a bilingual program for LGBTQ survivors of trauma with TOD@S, an inter-agency collaboration working to support Black and Latin@ survivors of partner abuse.

This year’s gala and soiree will not only be used to reflect on the impact and importance of an organization like HBGC, but the event will honor others who have made an impact in LGBTQ communities of color. Receiving the James Earl Hardy Legends Award will be Bamby Salcedo. The award recognizes a trendsetting activist who has impacted LGBTQ communities of color for more than 10 years. The founder and President of the Trans-Latin@ Coalition, Salcedo is recognized nationwide for her advocacy work. Her life story and work as a relentless activist for HIV and LGBTQ issues was featured in the 2013 documentary “transVISIBLE: The Bamby Salcedo Story.” [pullquote]HBGC’s Audre Lorde Founder’s Award, dedicated to an up-and-coming activist who has taken initiative to create change in LGBTQ communities of color, will be presented to Tiq Milan.[/pullquote]

HBGC’s Audre Lorde Founder’s Award, dedicated to an up-and-coming activist who has taken initiative to create change in LGBTQ communities of color, will be presented to Tiq Milan. Milan is the Senior Media Strategist of National News at GLAAD and has been featured in many national outlets advocating on behalf of LGBTQ communities of color. He was featured in the national media campaign for Live Out Loud’s Homecoming Project and is the Co-Chair for the LGBT task force of the National Association of Black Journalists.

The final award, the Sylvia Rivera Community Award, will honor a local organization, program, or business that has worked to empower LGBTQ communities of color within or beyond Black and Latin@ communities. The winner, selected by public vote, will be announced at the event. This year’s Nominees are: Body Image For Justice, ‘Feel it, Speak it’ Open Mic, The Network/La Red, The Queer Undocumented Immigrant Project, and Youth on Fire. Individuals can cast their vote at hbgc-boston.org up until November 5, 2014.

HBGC hopes the event will be an opportunity to further build community and raise the critical funds needed to sustain and expand the organization’s programming for another year. General advance tickets are $30, and student tickets are available for $15. Tickets can be purchased at the sustainer level of $60 to attend an open bar reception with guest honorees and HBGC’s Board of Directors. For more information and to purchase tickets, visit hbgcgala2014.eventbrite.com.