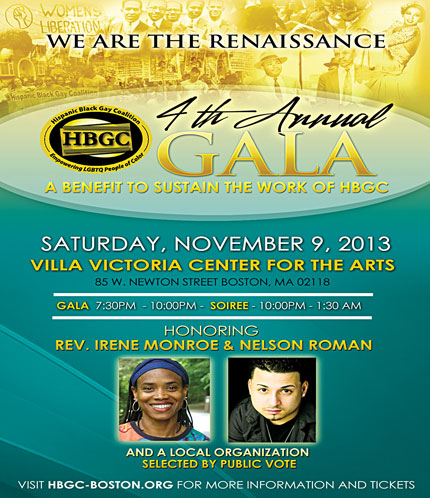 BOSTON, Mass. — The Hispanic Black Gay Coalition (HBGC) will host its annual gala on Saturday, November 9, 2013 from 7:30 p.m. to 1:00 a.m. at the Villa Victoria Center for the Arts located at 85 West Newton Street in Boston, MA.  The renaissance-themed celebration will mark four years for an organization founded to inspire and empower Black and Latin@ LGBTQ individuals to improve their livelihood through activism, education, outreach and counseling.

Highlights for the evening will include an award ceremony, silent auction, entertainment and a keynote address.  The evening will also feature “Taste of OUR Town” — an exhibit of local food establishments that are Black and Latin@ owned. The exhibit includes Cuban, Puerto Rican, Dominican Republic, and soul cuisine, among others, from some of Boston’s best restaurants.

In 2013, HBGC expanded its programs to continue addressing the diverse and intersecting needs of Black and Latin@ LGBTQ individuals. New initiatives launched by HBGC over the past year includes the New Leaders Institute, a leadership development program for LGBTQ youth of color, and HBGC’s advocacy team, a group that works to address the injustices Black and Latin@ LGBTQ people face at the hands of law enforcement officers and agencies.

HBGC also strengthened its work in underrepresented communities by expanding their role in TOD@S, an inter-agency collaboration supporting survivors of partner abuse; further developing HUES, a program of HBGC addressing the lack of visibility and opportunities for LGBTQ women in Black and Latin@ communities; and co-hosting The Summit, a gathering of formerly incarcerated LGBTQ people in New England. Other highlights for HBGC this year include its 2nd Annual Day of Advocacy at City Hall, 3rd Annual Youth Empowerment Conference, a Latin@ Pride panel on immigration, and their participation in anti-violence and Justice4Trayvon rallies.

In addition to reflecting on the organization’s growth, the upcoming reception will also honor others who have made an impact in LGBTQ communities of color. Receiving the James Earl Hardy Legends Award will be Rev. Irene Monroe. This award, given to a trendsetting activist who has impacted LGBTQ communities of color for over 10 years, will be awarded to Rev. Monroe for her trailblazing activism in LGBTQ and faith-based communities. As a religious columnist, Rev. Monroe brings to light how religion can be used to perpetuate homophobia as well as the ways in which religion can be used as a tool to dismantle inequalities.

HBGC’s Audre Lorde Founder’s Award recipient, dedicated to an up and coming activist who has taken initiative to create change in LGBTQ communities of color, will be Nelson Roman.  Board President and Founder of the Imperial Court of Western Mass., Roman has empowered communities by fundraising for local LGBT, HIV & AIDS, and youth programs in Western Massachusetts.

The final award, the Sylvia Rivera Community Award, will honor a local organization, program, or business that has worked to empower LGBTQ communities of color within or beyond Black and Latin@ communities.  The winner, selected by public vote, will be announced at the event. The 2013 Nominees are: BAGLY, Black & Pink, GLAD, ‘If You Can Feel It, You Can Speak It’ Open Mic, and MAP for Health Individuals can cast their vote at hbgc-boston.org.

HBGC hopes the event will be an opportunity to further build community and raise the critical funds needed to sustain and expand the organization’s programming for another year.  Advance tickets are $30. Tickets are also available to attend an open bar reception with the gala’s host committee for $50.  Host committee members include Boston City Councilor Felix Arroyo, Gary Bailey, Rev. Catherine Cummings, and Gary Daffin. Tickets can be purchased at hbgc-boston.org. The event is wheel chair accessible.