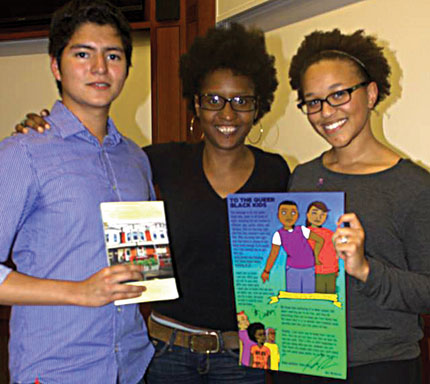 CAMBRIDGE, Mass.—Hispanic Black Gay Coalition (HBGC) hosted their third annual LGBTQ Youth Empowerment Conference—a free space for LGBTQ youth of color to connect with each other, share resources and gain useful skills for navigating life—last month at Harvard University Kennedy School of Government. The conference is the largest gathering of its kind for LGBTQ youth of color and their allies in New England.

According to Yarbrough, the first conference took place in 2011 at Epiphany School in Dorchester with 95 youth and bumped up to 135 youth at MIT in 2012. This year, the conference welcomed 211 youth and young adults.

“Events like these are especially important, not only to the LGBTQ community, but to the community as a whole,” said Lindsey Allen, who organized the HBGC youth conference along with Diego Huerta. “We have to understand that community and camaraderie [are] such an important part of life. Youth deserve a place to belong, to be heard and to feel safe, which is a goal of the conference. At the same time, this conference, and conferences aimed towards the LGBTQ community should also enhance conversations, as well as encourage the sharing of ideas that stretch beyond the LGBTQ community. LGBTQ youth of color should know that they’re not alone and that their seemingly insurmountable issues are experienced by other youth of color.”

Yarbrough also shared why he believed the event was important for LGBTQ youth of color.

“Many youth have also mentioned that the conference is a unique space where they can bring nearly all of their identities to the table in a welcoming environment,” Yarbrough said. “Without having to check their race, age, gender identity, religion, or sexual orientation at the door, many can truly embrace all that the conference has to offer and apply it to every sector of their lives and being.”

The conference opened with a plenary entitled “The Move Forward: The Next Generation of Emerging LGBT Leaders of Color Speak.” This panel convened some of the nation’s emerging leaders of color who came together to discuss how to close the leadership gap among LGBTQ young people of color and the general LGBT population, as well as the importance of mentorship, organizing as a collective, and developing effective and sustainable initiatives for other LGBTQ people of color.

The conference included over 20 workshops, nearly all led by LGBTQ youth and young adults of color. The 60-minute workshops included those on Health & Wellness, Identity/Intersectionality, The Arts, Life Skills, and Movement Building. There was also a sexual health room, resource fair, networking, open mic, raffle, and a reception hosted by The Harvard College Office of BGLTQ Student Life.

The keynote speaker was Mia McKenzie, author and creator of the blog Black Girl Dangerous.

“Mia’s speech touched upon the importance of self-confidence for LGBTQ youth of color in our current world,” said Allen. “Mia’s work is a much-needed breath of fresh air that takes into account the malleability that shapes the lives of LGBTQ youth of color. Everyone is different, but she promotes the necessity to acknowledge individuality in order to make a lasting impact in society as a whole.”

“After reading Twitter and Facebook, I think participants felt empowered and ready to take action within their lives, communities and schools,” Allen said. “Participants were prepared to ask more questions about one’s self and the world around them. I hope the participants felt more connected and supported by those at the conference.”