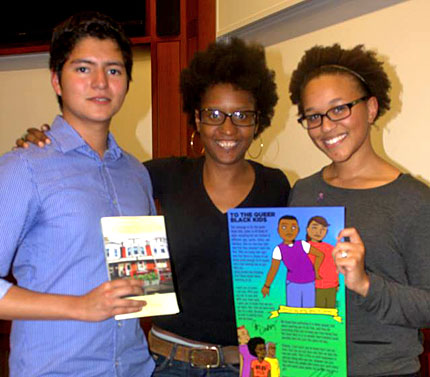 CAMBRIDGE, Mass.—The Hispanic Black Gay Coalition (HBGC) will hold their fourth annual LGBTQ Youth Empowerment Conference October 4-5, 2014. The event, held at the Massachusetts Institute of Technology’s Tang Center, is set to open with musical guest Jamar Roger’s from NBC’s “The Voice,” followed by two days including a variety of other speakers and workshops.

“I want the youth to see people who look just like them and take pride in that! I also want them to take leadership initiatives. I strongly feel I don’t see enough leaders of color and that’s very scary because when I was coming up, my parents instilled in me that people of color need to support each other, do our own thing,” said Quincey Roberts, HBGC’s co-founder and youth program coordinator. “I see a lack of this in the LGBT community.”

The gathering exists for LGBTQ youth of color to build community, skills, and a safe space to be themselves. To do this, HBGC also collaborates with two other organizations: Parents, Friends and Family of Lesbians and Gays (PFLAG), and the Boston Alliance of Gay, Lesbian, Bisexual, Transgender Youth (BAGLY.) [pullquote]“I strongly feel I don’t see enough leaders of color and that’s very scary because when I was coming up, my parents instilled in me that people of color need to support each other, do our own thing,” —Quincey Roberts[/pullquote]

“For me, the conference is a day where we can be in a safe, supportive, diverse atmosphere. Last year, the participants remarked that they finally had a place where they can relax and not feel stigmatized,” said Lindsey Allen, a conference organizer from HBGC.

Two keynote speakers were chosen for the event. Council Member Ritchie Torres will address the crowd and talk about his experiences as the first openly gay candidate to be elected to legislative office in the Bronx, NY and as the youngest member of the City Council. Poet, educator and activist Denice Frohman will speak about her life and experiences as a queer woman of color.

“My hope is that attendees will feel affirmed and inspired, that they will walk away holding their own power, that they will realize that they are beautiful the way they are, that they have always mattered,” said Frohman. “It took me well into college to begin processing that my sexuality was not ‘heterosexual’ and even more time to be out and connected to the LGBTQ community. I wish I was more connected during my youth, but I just wasn’t there yet. I was still at the early stages of navigating my sexuality.”

Additionally, director, producer, screenwriter, singer and actor Patrick-Ian Polk will be screening his latest film “Blackbird” at the conference. The movie is about a young man coming to terms with his sexual identity and how to unite that identity with his firm Christian faith.

“Growing up in a small town in Mississippi in the 80s, I learned early on that being gay was not something I could be open about, at least not until I left Mississippi and started college in Boston. I wish there had been conferences like this one when I was a youth, but thank goodness these events exist for the youth of today, ” said Polk, who will hold a Q&A with the movie’s star Julian Walker. “I’m thrilled to support this gathering by screening ‘Blackbird’ and interacting with the attendees.”

The conference grew out of an idea co-founders of the HBGC dreamed up as a way to get more involved with the youth community. This year the event has become more national as universities like James Madison plan to bring participants as well as people from the District of Columbia, Los Angeles and New York.

“My experience last year was so life-affirming. To be surrounded by black and brown youth from various parts of the region made me realize that I am never alone, although sometimes it gets lonely,” said attendee Mark Travis Rivera, 23. “I love it when I can be surrounded by other people of color who identify within the LGBTQ community and be able to empower one another in a space that is safer to do so.”

For more information about the HBGC, visit www.hbgc-boston.org.