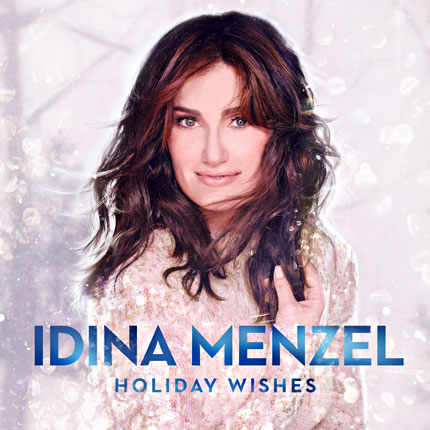 Idina Menzel is the luckiest person to have ever been called Adele Dazeem. The awkwardness of having her name butchered by John Travolta during this year’s Oscars telecast gifted the Broadway icon with newfound clout, boosting her out of the gay niche and into mainstream notoriety. Now, Elsa the Snow Queen rides the snowy wave of her wintertime success and releases a Christmas album (because there’s nothing else you should be doing after your inner drag queen surfaces and all your repressed powers turn everything to ice). If you’re expecting some kind of Christmas version of “Let It Go” from the Frozen superstar, well, let it go. Holiday Wishes is focused on simple, classic Christmas nostalgia: for instance, “Do You Hear What I Hear?,” “Have Yourself a Merry Little Christmas” and “Silent Night” (not exactly the silentest of nights as Menzel can’t help but belt). Producer Walter Afanasieff, who made magic with Mariah Carey in the early ‘90s, and also co-wrote “All I Want for Christmas Is You,” heads Menzel’s project, which includes a jazzy and not-quite-as-magical version of Carey’s staple (with Kenny G on sax). And because Idina knows you want her to sing something Disney, she doesn’t let you down. Her lovely rendition of “When You Wish Upon a Star” is designed as a big ol’ fashioned mega ballad that makes everything shine a little brighter. Grade: B-

It’s basically impossible to stay hydrated amid all the crotch-grabbing, butt-exposing sexiness Nick Jonas has so generously donated to the thirsty people of the world. Giving you yet another reason to suck down some H2O is the former Jonas Brother’s self-titled solo album, the sonic component to the never-ending parade of partial nudity (but really, how many times do you think he cups his junk to reach falsetto?). Nick toys with his sexed-up image on “Teacher,” an R&B-tinged, love-gone-sour song where he sounds like he’s ready to get the ruler out and give you a nice spankin’. “Take it off for me,” he urges on the funky soul number “Take Over,” referring to your “disguise” (i.e. clothes).  With “Numb,” he instigates a bump-and-grind; “Avalanche,” with Demi Lovato, shows he’s got soul – and not just vocally. There’s a beating heart beyond that flirty façade. Then it’s back to the bedroom for the Mike Posner-assisted slow jam “Closer.” “Open up and let me in,” he demands, making dreams come true. So yeah, if you think you’re getting Justin Timberlake vibes, you are. If you’re ashamed to get aural pleasure from a Jonas Brother, you shouldn’t be. Like his clothes, Nick’s shed the Disney act for this rite-of-passage project, indicative of his journey into maturity, into desire, into a girl’s pants. The purity ring is off; he’s literally and figuratively more naked than ever before. Dig in. Grade: B+

Following an eight-year absence, Ireland’s Damien Rice returns with all new reasons for you to weep rivers of sadness. Maintaining the reflective folk style of his O debut and 2006’s 9, the Irish troubadour’s trademark sound – and all the feels of heartbreak and wistfulness – reemerges on his third release, overseen by producer Rick Rubin. In terms of cohesiveness, Fantasy is Rice’s best. But, particularly with “I Don’t Want to Change You” and “Trusty and True,” the album’s greatest triumph is its emotional payoff. Grab a pillow and let it out.

For over two decades, Trisha Yearwood’s been more than just another pretty voice. Beyond those powerhouse lungs are something equally as noteworthy: Songs to compliment them. A culmination of her most popular tunes, along with six new ones, _Hit After Hit_ demonstrates that fact time after time. From 2005’s standout single “Georgia Rain,” to recent recordings like faith parable “Met Him in the Motel Room” and her spirited collaboration with Kelly Clarkson, “PrizeFighter,” Yearwood proves once again she’s still one of the best in the business.