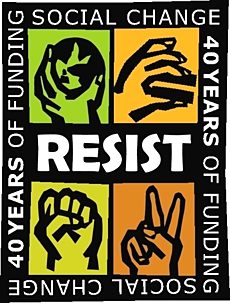 Founded in 2009, HBGC is Boston’s leading organization led by, and working for, Latino/a and Black LGBTQ communities. The organization works to inspire and empower their constituency to improve their livelihood through activism, education, outreach and counseling. HBGC has quickly gained traction in the Greater Boston area by implementing stigma-reducing campaigns, educational forums, and leadership development initiatives.

HBGC recently deepened its commitment to developing activist leaders by launching the New Leaders Institute, a program for Black and Latino/a LGBTQ youth involving a series of skill building, leadership, and community organizing trainings that culminate in the implementation of community-wide projects and campaigns. The first New Leaders Institute training took place on May 9, 2013; the program will run through October 2013.

“We are honored to have RESIST invest in our work,” said Corey Yarbrough, Executive Director and co-founder of HBGC. “RESIST has an impressive record of funding groups and movements that have paved the way for monumental social change. HBGC will now have greater resources for empowering Black and Latino/a LGBTQ people to make their mark on history and transform the world around them.” [pullquote]Groups that have received critical early funding from RESIST include the Black Panther Party (1960s), National Organization for Working Women (1970s), ACT-UP (1980s), and National Network for Immigrant and Refugee Rights (1990s).[/pullquote]

RESIST began in 1967 in support of draft resistance and in opposition to the Vietnam War. Groups that have received critical early funding from RESIST include the Black Panther Party (1960s), National Organization for Working Women (1970s), ACT-UP (1980s), and National Network for Immigrant and Refugee Rights (1990s). As a first resort funder for hundreds of organizations, RESIST’s small but timely grants are made to grassroots groups engaged in activist organizing and educational work for social change. In fiscal year 2011, RESIST gave over $342,000 to 130 organizations across the country.

“Each year, RESIST funds organizations like the Hispanic Black Gay Coalition because our mission is to support people who take a stand about the issues that matter today, whether it’s to resist corporate globalization, promote a women’s right to choose, or develop activist leaders,” said Board Chair Miabi Chatterji. “And we believe it’s especially important to help grassroots organizations that might be too small or too local—or too radical—for mainstream foundations.”

Hispanic Black Gay Coalition (HBGC) is one of few non-profit organizations in Boston dedicated to the unique and complex needs of the Black, Hispanic and Latin@ LGBTQ community. Founded in 2009, we work to inspire and empower Latin@, Hispanic and Black LGBTQ identified individuals to improve their livelihood through activism, education, community outreach, and counseling.