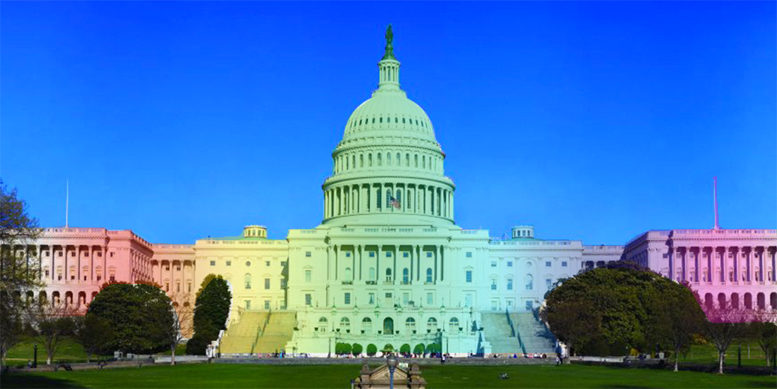 For the first time, a chamber of Congress passes a bill ensuring protections for LGBTQ people in virtually all areas of life; Mass. Congressman Seth Moulton did not vote

Today, the U.S. House of Representatives voted to pass the Equality Act, a landmark civil rights legislation that would ensure unequivocal, comprehensive protections for all LGBTQ people, including in employment, housing, and public accommodations, in federal law, therefore curbing discrimination against this community. Although a bipartisan effort, some key figures, who have supported LGBTQ rights in the past, were absent for the vote — something that “offended” some constituents.

“Today’s vote marks another historic moment in our nation’s continuing journey toward ensuring equality and fair treatment for all Americans,” said Gary Buseck, Legal Director at GLBTQ Legal Advocates & Defenders, GLAD. “Individuals, businesses, and political leaders across this country have come to understand that no one should be at risk for being denied a home, fired from a job, or excluded from access to fundamental services because of who they are or who they love.

“It should be the highest aspiration of our nation to eliminate inequality and ensure the fullest level of inclusion in public, civil and economic life for all Americans. The Equality Act, in conjunction with our other vital civil rights laws, furthers this project by providing clear and consistent protection from discrimination for LGBTQ Americans.”

The momentum for the passage of the bill is key when there are states, like Tennessee, trying to pass local bills that promote discrimination against the LGBTQ community.

“At a time when individuals, in many states, can still be fired or denied housing because of their sexual orientation or gender identity, and women and LGBTQ people can face discrimination when they are engaging in activities as simple as shopping, commuting to work or eating at a restaurant, establishing clear protections is critical,” said Debra L. Ness, President, National Partnership for Women & Families.

The U.S. Senate must vote on and pass the Equality Act, too. Though the bill has a bipartisan coalition of 47 Senate sponsors, there is still much more work to be done.

“Numerous studies have shown that experiencing discrimination has negative effects on the health and well-being of LGBT people,” said Fenway Institute Director of Health Policy Research Sean Cahill. “Bias contributes to minority stress and correlates with negative physical and mental health symptoms, including headache, pounding heart, feeling sad, and feeling frustrated. We know that LGBT people can face discrimination in any public setting, including hospitals, health care centers, and other places where people seek care to have their physical and mental health care needs met. We also know that people who experience discrimination in health care are less likely to seek care.”

Most members of Congress voted to pass the Act. According to RollCall.com, there were “23 members of the House who didn’t vote including 3 Democrats seeking the 2020 presidential nomination–Seth Moulton of Massachusetts, Tim Ryan of Ohio and Eric Swalwell of California.” Congressman Moulton’s absence (6th District-Mass.) has surprised and upset some in the LGBTQ community who feel they are an “afterthought” to him. After several “undeliverable” emails, this reporter was able to contact Tim Biba, from Moulton’s office, who sent a statement from the Congressman.

“Seth is a strong supporter and original co-sponsor of this legislation. That has not changed,” read the statement sent to The Rainbow Times via e-mail. “Unfortunately, he had to miss votes due to a longstanding commitment that pre-dated the notice that the Equality Act was going to come up for a vote. It was clear that the bill had the votes to pass and, if it didn’t, he would have moved heaven and earth to ensure that he was there to get it across the finish line. Seth is a fighter and he’ll continue to fight like hell for the LGBTQ community. For example, he’s a leading opponent to the president’s trans ban and has been working on the Armed Services Committee to make sure anyone who wants to serve the country and is qualified can do so.”

But, his absence in the face of the discrimination coming from the White House sent vibes to several of his supporters in Massachusetts, some of which wished not to be quoted, but expressed “dismay” at the Congressman’s absenteeism.

“I think it is a disgrace that on the 15th anniversary of marriage equality in Massachusetts, literally the 15th anniversary of his own LGBTQ+ constituents earning the right to marry, he [Congressman Moulton] finds it more appropriate to neglect the job he was elected to do, presumably to campaign for President, than to show he truly supports our community,” said Tyler Carlton, 26, Co-Chair of the Massachusetts Democratic Party LGBT Subcommittee, and a Salem, Mass. resident. “My vote is going to someone that does what they say they are going to do. I will not vote for someone that tells me to my face they support me, but cannot find the time of day to actually support me. I look forward to supporting a primary challenger.”

A Peabody resident also echoed similar thoughts, after reading about it.

“Moulton’s absence speaks volumes about his current level of commitment to the LGBTQ community,” said Marlene Fendelman, Peabody, Mass. “His statement is so offensive because it’s the principle behind it since it wasn’t enough of a priority for him to show up. Like, we’re an afterthought, it sounds like. After such a long fight to ensure that our community is protected at the federal level and recognizing how critical this bill is to protect our lives, there is no excuse for him not to have been in attendance. I think he needs to remember who helped to put him into office in the first place since our community was valiantly supportive. With the attacks coming at us from the top down, his visibility and attendance in Washington to support that bill was critical in my view. I am disappointed and I was, too, when he didn’t support Pelosi. For that, he had a louder voice.”

Carlton added that the “Congressman committed to being a Congressman far before committing to whatever event caused him to miss this important vote. His excuse does not make up for it.”

Others, not in his district, also expressed discontent.

“Seth Moulton was among the small group of representatives who participated in the crazy effort to knock down Nancy Pelosi for the Speaker’s seat by trying to devalue her skills as a powerful member the Democratic Party,” said Muñoz, multimedia journalist, Holyoke.  “The corporate media fell in love with him because he kind of breaks the mold as a war veteran who’s a Democrat and allegedly liberal. He’s an ambitious man seeking publicity and/or the presidency. That’s it.

“If I were in his district and the GOP put up someone like the current crop of traitors to the Constitution for the congressional seat, yes, I would vote for him. After all, I don’t have to love the candidates; I have to support who’s pushing to make a more perfect union for all. But if someone like Alexandra Ocasio-Cortez went against in a primary, I would love to vote for her.”

Bipartisan work was key to the passage of the Act and it was lauded from other organization officers.

“For the first time in American history, members of Congress have affirmed that LGBTQ people need express and enduring protections in their daily lives. This is the latest indicator of the mounting evidence of bipartisan momentum across the country in support of LGBTQ Americans, no matter who they are or who they love,” said Masen Davis, CEO of Freedom for All Americans. “It’s urgent that we keep the momentum going and bring people together from all walks of life in order to secure the strongest protections for as many people as we can, as soon as possible. We are grateful to Speaker Pelosi, Rep. Cicilline, and Democratic leadership in the House for prioritizing this crucial legislation.”

The passage of the Act by the House accounts to nothing in itself if the Senate doesn’t do the same.

“The Equality Act would provide a consistent, national standard and ensure that everyone has the opportunity to live safely and with dignity, to advance at work, to provide for one’s family and to thrive economically,” said Ness, via a media statement. “The House passing the Equality Act is an important step in the right direction, and we urge the Senate to do the same.”

At a time when the Trump administration, with the help of the Supreme Court’s Conservative Justices, has openly unleashed a direct attack against transgender servicemembers—as LGBTQ rights are being challenged and erased in certain parts of the country—the Equality Act is a measure that would bring some peace of mind to the over 15K voluntary military active members of the U.S. Armed Forces.

“The Equality Act sets the groundwork for a future in which transgender people are free to prosper and thrive alongside our fellow Americans,” said Mara Keisling, Executive Director National Center for Transgender Equality, via a media release.

And other non-LGBTQ organizations were clear in their support of the Act.

“The Trump administration has taken horrifying steps to institutionalize and allow for discrimination against LGBTQ people in the military and health care, and scaled back enforcement of anti-discrimination laws overall,” said Kristin Rowe-Finkbeiner, executive director and CEO of MomsRising. “Now more than ever, America needs the Equality Act to become law. The Senate simply must act.”

According to a Freedom For All Americans (FFAA) release, “advocates delivered petitions to House bill sponsor Rep. David Cicilline from more than 130,000 Americans in support of LGBTQ nondiscrimination protections. On Tuesday, more than 70 religious groups and 5,000 people of faith explicitly endorsed the Equality Act and opposed attempts to use religion to discriminate against LGBTQ people.”

Over the past year, bipartisan momentum for treating LGBTQ people fairly has increased in a number of additional ways, including:

The Equality Act would have a direct, positive impact on families like Krista and Jami Contreras, said the FFAA release, who were turned away from the pediatrician’s office at their six-day-old newborn baby’s first check-up simply because they are a same-sex couple. Krista and Jami were some of the many voices who testified in support of the legislation.

*Contact Congressman Moulton about this or anything else here.