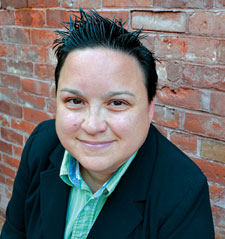 HOLYOKE, Mass.—Is Holyoke the new Northampton for LGBTQ politics? Based on the results of municipal elections within the last 2 years, the question begs to be asked. In 2011, openly gay candidate, Alex Morse, received national attention as the nation’s youngest and “out” politician who went on to secure the city’s highest elected office as mayor. He was re-elected again this year. Similarly, openly lesbian candidate Jossie Valentin won the Ward 4 City Councilor seat by a landslide. The Puerto Rican native will be sworn in this January 2014.

In this exclusive interview with Councilor Elect Valentin, The Rainbow Times (TRT) examines her victory and the direction of Holyoke as this new era of Holyoke government continues to ensue in favor of the LGBTQ and Latino community.

TRT: You won by a landslide. Were you ever really concerned that you wouldn’t win?

JV: When I pulled nomination papers in May, I hit the ground running. I started campaigning immediately; knocking on doors, dropping off flyers, [and] making personal connections with folks. I started experiencing the positive feedback immediately. It was a great experience. For a while, I was the only candidate running. Then, during the summer, I went on vacation to visit my family in Puerto Rico and attend my 20-year high school reunion, and when I came back, I found out that three other folks (including a former Ward 4 City Councilor) had pulled nomination papers while I was away. I guess this is what happens when you go on vacation in the middle of running a campaign! [Laughs] All of a sudden, things changed very quickly—I had to move into high gear immediately with my campaign with a preliminary election scheduled for September. One person ended up not submitting their nomination papers with signatures, but it still left three of us on the ballot for the September 17th preliminary election. When I won that election with 65% of the votes, I had a pretty good feeling about winning the general election on November 5th—which I won with 74% of the votes. The feedback I received from voters was overwhelmingly positive, and so many of them were so excited about me running as a bilingual candidate. Holyoke is 49% Latino, and Ward 4 is 70% Latino. When voters would open their doors and I would speak to them in Spanish, it took them by surprise; a positive surprise indeed.

Q. When you received funding from the Victory Fund (a non-profit whose purpose is to increase the number of LGBT leaders in politics), did you tell yourself “this is it, I am winning” or did it just make you more confident?

A. When I received the endorsement from the Victory Fund, I was honored. Since the beginning, I made the decision to run my campaign as an out lesbian. I have been out for the past 20 years—that was not going to change for a political campaign. [Smiles] I assumed that it was a possibility that my sexual orientation would be a topic of conversation on the campaign trail, especially from the conservative side of Holyoke, but it never became an issue—At least, not that I am aware of. I also received an endorsement from Pioneer Valley AFL-CIO, and was honored to be recognized by such a large group of unions. As a union member myself (MTA), I understand and appreciate the value of unions. I was informed about these two endorsements in a 1-week period. That was a great week!

Q. Via GoFundMe.com you tried to raise funds for a couple who lost their house to a fire. Why did you do that? Did some people view it as “politics?”

A. It was quite interesting how that happened. When I saw the news about the fire, I knew it had taken place in Ward 4. I stopped by that house a couple of days later to reach out to the residents, but I was not able to locate them. A week or two later, I was door knocking in a different section of Ward 4, and I met these folks that started telling me about how they had been displaced by a fire and now they were living in this house with their cousin. I immediately made the connection that these were the folks that I had been looking for. I offered them my assistance in terms of trying to find resources for them (referrals, donations, etc.) and they were extremely grateful. I started sharing their story with some of my campaign volunteers and proposed that we set up a fund for them in terms of donations—monetary and otherwise. I created a Facebook event page and a GoFundMe account and within a day or two, the donations started coming in. It was a great opportunity to show folks that we are a strong community [Smiles]—we look out for each other and help without expecting anything in return; a true example of community building. I look forward to having ongoing community projects that involve residents from all different backgrounds. This summer, we started a clean-up initiative where, as a community and as a group of volunteers, we assist residents who cannot always take care of the exterior of their properties (landscaping, etc.). This weekend we will be tackling another property that has become a safety issue for the neighborhood. Organizing these projects has been very rewarding and I see it as opportunities to bring the community together.

Q. Was your opponent for Holyoke’s City Council Ward 4, L. Dorothea Macneil, a tough opponent? How were the debates with her since she claimed to be so experienced and knowledgeable about the people from her ward?

A. There were four debates/forums. My opponent attended two of the four. I have always considered myself to be a very progressive person; therefore, I presented myself as a progressive candidate. It was clear that our approaches, platforms, and ideas were quite different since the beginning.

Q. After winning, have your main priorities for the residents of Ward 4 changed, as opposed to what they were prior to winning (public safety and trash issues)?

A. When I was campaigning, I had many folks tell me: “I wish I lived in Ward 4 so that I could vote for you. You need to run At-Large so that I can vote for you!” I was honored to receive these compliments, and I would remind folks that my votes as a City Councilor will count as much as those who are At-Large Councilors. I realized very early on during my campaign that although I was running for Ward councilor, the expectations from Holyokers would be that I would represent all of them, not only the residents within Ward 4. Although my priorities for Ward 4 will definitely include the areas of public safety and trash, there are many more issues that I heard about from residents as I was campaigning. I committed to listening and addressing their concerns, and that is exactly what I will do.

Q. You won fair and square as an out lesbian, do you think that a new era has hit Holyoke with now more than one “out” public official? Do you think you could have done the same 10 years ago?

A. [Pauses] It is clear to me that the election of Mayor Alex Morse in 2011, and again this year, as an out gay man sent a strong message in terms of how Holyokers are looking at candidates. The fact that I am a Puerto Rican out lesbian and was just elected to serve as a City Councilor is a huge message in terms of the direction that the City of Holyoke is moving in. We have come a long way, but there is much more work to do.

Q. What do you want to tell the people who voted for you?

Myriam Quiñones, the woman behind the Councilor, and Jossie Valentín got married in 2008.
Photo: Yarenis Oliveras

A. I tell them that I will always try my best to be open, transparent, and inclusive. I will always be respectful of my constituents, even if we disagree on issues. I have always been an open book: What you see is what you get. I expect them to challenge me at times, and support me when necessary and appropriate. I cannot do this work alone. I need all of them and we need to work together! [Smiles]

Q. I’ve heard people say to family members “Don’t run. Politics are dirty and you’re such an honest person.” How does your family here and in PR feel about it?

A. My family was extremely supportive since the very beginning. They were very excited. My aunt, who raised me with my mother, will be flying from Puerto Rico to attend my swearing-in ceremony in January. An exciting time for sure!

Q. In politics we often hear that a candidate’s success somewhat depends on the partner they have beside them. What role did Myriam play in your victory? Could you have done it without her?

A. Myriam has been phenomenal. When we got married in 2008, we would have never imagined that this would be the path that we would be on in 2013. I would come home after hours of door knocking, exhausted, and she was always my rock. It was also great to see how she connected with my campaign volunteers. They all love her. [Smiles]

Q. What was your secret to winning this election?

A. I worked hard, and I was myself at all times. I listened when I needed to listen, and I spoke when I needed to speak. Most folks just want to be heard and feel validation. Once you open that door with a positive outlook, the results are great for the most part.

Q. Were there difficult moments during the campaign when you thought about not running at all?

A. Not at all. When I commit to something, I finish it. Plus, the adrenaline kept me going! [Laughs]

Q. On your Facebook page, you informed every one of your campaign’s ups and downs, meetings, etc., using your bilingual skills. Do you plan on communicating in both languages with your constituents? If so, why is that important?

A. Folks really appreciated my social media updates—it made them feel that they were on the road with me. It kept it “real.” I decided to post in both English and Spanish on my campaign page because I felt it was necessary and important to be inclusive and acknowledge the diversity of our Ward and our City.

Q. Any regrets of running?

A. Absolutely not! [Smiles] This journey has been amazing. I know that the road ahead will not always be smooth and I will need to make difficult decisions at times, but I appreciate the feedback that I have received so far and I am grateful to serve the residents of Holyoke in this new capacity. It is time for all voices to be included at the table, no matter folks’ race, gender, sexual orientation, socioeconomic status, or amount of time they have lived in Holyoke. I’ve been a Holyoke resident for 8 years, and I care as much about the opinions of folks who have lived here for 30 years as those who have lived here for 30 days. We can all work together to continue to make Holyoke a great place!

Is Holyoke the new Northampton for LGBTQ politics? You decide.

1 Comment on "Is Holyoke the New Northampton for LGBTQ Politics?"