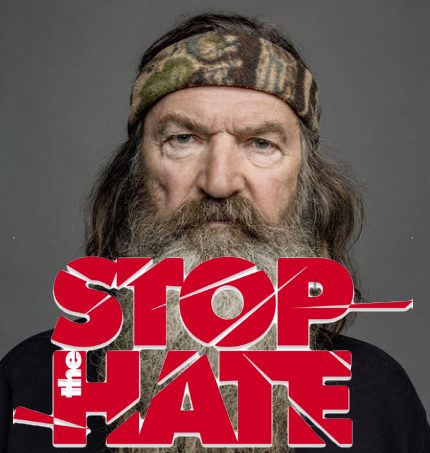 In today’s letter, HRC president Chad Griffin and NAACP interim president Lorraine Miller called on A+E to take responsibility for Robertson’s words, and explained why they were so inaccurate and offensive:

“These remarks go beyond being outlandishly inaccurate and offensive. They are dangerous and revisionist, appealing to those in our society who wish to repeat patterns of discrimination. We urge A+E to immediately denounce and repudiate Robertson’s comments. Furthermore, we call on you to see that Phil Robertson apologizes for his vitriolic comments. Surely a brand like A+E does not want to be associated with such racist and homophobic remarks.

“…When a figure from a popular show like ‘Duck Dynasty’ makes such disparaging remarks about entire communities of people, we cannot allow it to go unnoticed. No doubt there are both African Americans and LGBT people among the millions of viewers of both ‘Duck Dynasty’ and other programs across A+E’s media platform. Those viewers who have demonstrated loyalty to your network deserve to hear that there is absolutely nothing wrong with them, and that Americans won’t stand for Phil Robertson’s comments. That’s why we’re so hopeful you will move swiftly to condemn his remarks.”

The full letter is available here.

Founded in 1909, the National Association for the Advancement of Colored People (NAACP) is the nation’s oldest and largest nonpartisan civil rights organization. The NAACP’s half-million adult and youth members throughout the United States and the world are the premier advocates for civil rights in their communities and monitor equal opportunity in the public and private sectors.