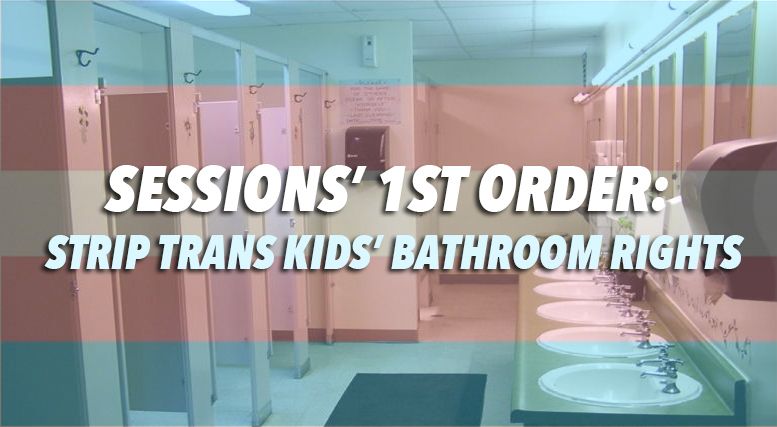 The Rights of Trans Kids, Which Anti-LGBT Sessions Stopped as Soon As Sworn Into Office

Today, in response to the U.S. Department of Justice’s announcement that it will no longer challenge a nationwide hold on protections for transgender students, nearly 800 parents of transgender children sent a letter to President Donald Trump condemning the decision and calling on his administration to fully enforce federal civil rights laws. The letter, signed by parents from 45 states plus Washington, D.C., was organized by HRC and its newly formed Parents for Transgender Equality Council, a coalition of the nation’s leading parent-advocates working for equality and fairness for transgender people.

“Just 48 hours after the confirmation of his anti-equality attorney general, Donald Trump’s administration directly attacked LGBTQ equality and took aim at the rights of transgender youth,” said HRC President Chad Griffin. “This disgraceful action exposes transgender students to harassment and discrimination and emboldens bullies from classrooms to state legislatures. These 781 courageous parents are asking that the federal government protect their children at school, something that all families deserve. We stand with these parents and urge President Trump and Attorney General Sessions to listen to families across the country demanding basic fairness and respect for every child.”

In his first days as Trump’s Attorney General, Sessions withdrew a request to halt an order against the Obama administration’s protections for transgender students. The 781 parents, representing the thousands of families of transgender children across the country, write, “No young person should wake up in the morning fearful of the school day ahead. When this guidance was issued last year, it provided our families — and other families like our own across the country — with the knowledge and security that our government was determined to protect our children from bullying and discrimination. Please do not take that away from us.”

In 2016, the Obama Administration’s Departments of Justice and Education issued comprehensive guidance to ensure that transgender students were being treated fairly and with dignity in public and federally-funded schools, including having equal access to sex-segregated facilities, such as restrooms and locker rooms, that are consistent with their gender identity.  Thirteen anti-equality state attorneys general, led by the notoriously hateful Texas Attorney General Ken Paxton, filed suit challenging the guidance. After a Texas federal judge issued a nationwide hold on enforcement of the guidance, the Obama Administration responded by requesting the court limit the hold to the 13 states filing suit.

On Friday night, just 48 hours after Sessions was confirmed as Attorney General and a day after being sworn in, the Department of Justice rescinded the Obama Administration’s challenge, allowing the nationwide hold to continue. Despite this action, transgender students facing discrimination can still file suit under Title IX of the Education Amendments of 1972.