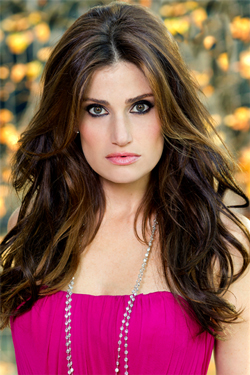 Idina Menzel doesn’t do anything halfway – even when she’s deciding on her gay faves. “It’s so silly,” says the homo-hearted theater queen, surfing Google for “hot gay male celebrities.” Her assistant even gets involved. “This is very important stuff,” Menzel giggles, fully immersed in her search to name her current gay crush.

“Oh, I could do a woman” she realizes, before catching the unintentional humor in that: “I mean, not do a woman.”

Ten minutes later, she’s got it: Jane Lynch, Wanda Sykes and Anderson Cooper, because “that makes me sound really smart.” Not that she has to sound anything but beautiful, and that she already does – as demonstrated in her 20 years on stage, from Rent to Wicked (originating the roles of Maureen and Elphaba, respectively), and as a cradle-robbing club leader on Glee.

Now the ever-sweet Broadway diva has a new live album, Idina Menzel Live: Barefoot at the Symphony, and plans to hit the road this summer for a series of tour dates. Menzel caught up with us recently to talk toes, hubby Taye Diggs’ gay tendency and learning the real definition of “white party.”

Q: Barefoot at the Symphony is the name of the new album – do you have nice feet?

A: They’re all right. My toes are pretty in proportion to each other. No weird toes.

Q: Is the second toe longer than the big toe?

A: No, they’re actually nice like that. It’s just that – from working out and stuff – my heels are always dry. But the toes are nice!

Q: Will your tour be a lot like this album?

A: The album is a culmination of a year and a half of touring and playing with these amazing symphonies. So, this summer when I go on tour, I obviously need to retain some of the songs that I know people would shoot me for if I didn’t sing them, but I am going to clean the slate and freshen up the show and explore some brand-new material.

Q: Do people expect you to fly when you do “Defying Gravity?”

A: No, I don’t think they do. (Laughs) But I’m sure they expect me to hit very high notes, which isn’t always an easy thing to do.

Q: How did it go over when you covered “Poker Face” with the symphony?

A: It’s funny: The audience was everyone from theater people to symphony people to just your regular audience coming to see some entertainment for the evening. But “Poker Face” was great. I did it because I knew people would like to see something from Glee and I thought the juxtaposition of the song with the orchestra could be really cool, but I didn’t realize it would become a comic piece for me. The first couple of times I did it, I realized these stories and I stopped the full-on symphony in the middle of the song, which you never do, to tell people the story behind it. Then it just started becoming this little creature that I used every night as a way of singing that song but also having fun with the audience and being really spontaneous.

Q: On the album you recall a crush you had on a gay professor during your freshman year in college. What was it about him that you were so into?

A: Well, first, I didn’t realize he was gay until later in life, but he was just so intense and he was the kind of teacher that you know you trusted and respected so much that also could make you cry in a second, because he saw right through you and challenged you and expected the most of you. For me, when I got in front of class and felt like I was disappointing a teacher, I would just get so demoralized. That feeling never goes away. Whether you’re standing up in front of 10 people in a class or 5,000 people in an audience, the idea of opening your soul and making yourself really vulnerable is quite terrifying and sometimes, if you’re not prepared, you get really thrown.

Q: Since you have a history of falling for gay men, did Taye have to pass some kind of test?

A: No. Please. He went to the School of the Arts in Rochester and majored in theater in Syracuse, and so many of his friends were gay before we even met.

Q: Oh, Idina, these are all red flags.

A: (Laughs) Yeah, he’ll even engage in “runway” at parties at the house if we pull out the carpet and it’s late at night, he has a couple of drinks and Taye will even do runway … if you give him enough alcohol.

Q: Who has the bigger gay following?

Q: You know, you take everything from the gays: Taye Diggs. Kissing Puck on Glee. Waking up with Patrick Dempsey in Enchanted. What do you have to say for yourself?

A: That’s some good stuff, huh? In my defense, I’m a mom of a 2-year-old and – like, right now I’m in the ugliest outfit, practically pj’s, and my hair hasn’t been washed in two days – and if I didn’t have those opportunities, I’d never feel like a woman again.

Q: What was your recent gay cruise experience on Atlantis’ Allure of the Seas like?

A: I learned the white party doesn’t necessarily mean you wear white suits; it means you wear as little as possible and maybe some white Hanes underwear and angel wings. (Laughs) I learned that I will never go on a cruise ship again unless it’s a gay cruise because I am now ruined forever. The creativity and the passion and the fun will be unmatched. The best audiences of my life. It was just a blast. There are a bunch of sides to yourself, but it’s nice to just let ’er rip. And sing some duets with some drag queens!

Q: What would you tell your son, Walker, if he came out to you?

A: Hopefully I wouldn’t have to say much by then. Hopefully he’ll grow up in an environment where he won’t think much of it and it will be very commonplace and yet, if for some reason that discussion did arise, Taye and I would say, if we were to have a son or daughter who were gay, they wouldn’t meet any resistance with us. We always take five steps forward and two steps back, but in our house, in our family and with our friends, he already is in the company of – and loved by – all sorts of people.

(Taye and I) have very supportive parents, and so it’s more the outside world that tends to put some stigma on it, even in this day and age. I’d probably say Taye has more responsibility to African-American people, not feeling like he’s let them down in some way. I think it’s just about raising a son that’s going to be mixed race and how to tackle that and what that means – even religiously and spirituality, we have a lot of stuff ahead of us. I want to be really clear and defined so that it’s not confusing.

Q: Is your character on Glee, Shelby, done for?

A: You know, I don’t know. They’re saying I’m coming back, but you never know. Maybe they’ll go with another storyline. But I love being there. I love the energy on set, and I certainly did enjoy being hot for teacher and having the 17-year-old man with the Mohawk to kiss on. But they keep things really close to the vest, so it’s hard to tell.

Q: Are you looking at being a part of a musical again?

A: Yeah, but nothing that I really can speak of yet. I’m trying to give people their space to create and do their thing, but that’s my goal. I’m putting my energy toward trying to get back to New York City in an original piece, just because that’s where I’ve had the most success and where I feel the most fulfilled. That process of standing at the piano with a composer and a writer as they’re creating from scratch and using you as inspiration – there’s nothing like that.

Q: Any word on a Wicked movie?

A: No. I just always hear that if it came about Kristin (Chenoweth) and I would probably be too old, which is really annoying considering all the CGI you can do these days. I called them and told them, “What about Avatar?!” You never know, but I kind of don’t hold my breath on that one. And I feel lucky enough that I got to do the Rent movie 10 years after I actually originated the role. So we’ll see about Wicked.

Q: So much has happened in your career since playing Maureen in Rent. Is that still a part of you?

A: Yes, because I put it in my show all the time in some capacity, so it actually forces me to get back in touch with that time in my life and what it represented and how I’ve grown since then.

Q: What about Wicked? Do you have nightmares about going green?

A: Yes! I actually have those recurring theater nightmares. It’s not always just Wicked; it could be Rent, and they just desperately need me. The girl playing the role at the time can’t get in and there’s no one around. They call me and I’m like, “Of course I remember how to do it!” and I get on a dark and dreary stage that looks nothing like any set I’ve ever been on before and I can’t remember a single line and I don’t know how to put the green makeup on and I start having a meltdown.

Out of Character: A Candid Chat with Alex Newell