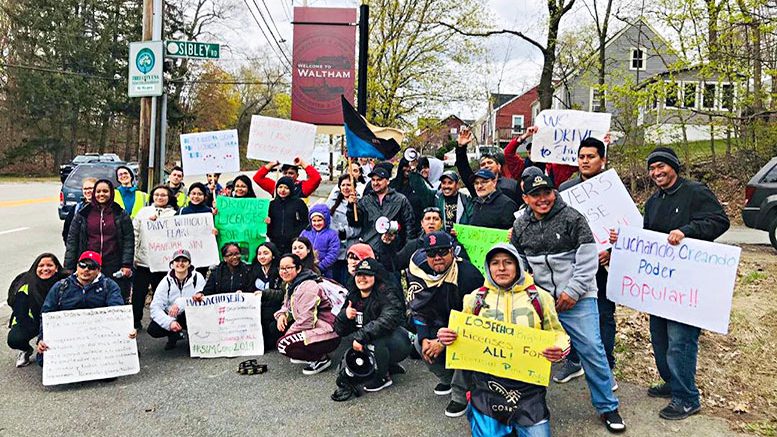 Caminata that Movimiento Cosecha had in April 2019; Photo: Cosecha

Undocumented immigrant encampment; After fifteen years of empty promises saying action will be taken on drivers’ licenses for migrants, the community and allies will gather to demand change through a mock celebration

BOSTON—Beginning at noon on Friday, September 13, until Sunday evening, immigrants from Movimiento Cosecha and their allies will converge on the Massachusetts State House in furious celebration. We are rising up to continue to demand that legislators follow through on their promises to protect the immigrant community of Massachusetts.

For fifteen years, the undocumented community of Massachusetts has been fighting for access to drivers’ licenses regardless of immigration status, and during this time, there have been many failed attempts at passing a law. Thirteen states and D.C. have already passed similar legislation and several more are considering it; with a majority Democratic legislature, now is the time to pass driver’s licenses for all. Undocumented immigrants are taking to the streets in unprecedented numbers in Massachusetts, calling for legislators not to let the Trump immigration agenda infect Massachusetts and instead pave the way for immigrants’ rights.

For three days and nights, members of Cosecha and allies will gather in front of the State House celebrating a Quinceañera symbolizing the fifteen years lost and making their demand for a just future loud and clear. Typically a celebrating a girl entering young womanhood, this Quinceañera is honoring the work put in by undocumented immigrants and their allies as well as the failure by leadership to grant immigrants in our state necessary rights.

The beginning of the event on Friday will include a limousine and a party. Saturday will be full of family activities beginning at 12 p.m. On Sunday, the festivities will close with a vigil at 3 p.m. On Friday and Saturday night, members of Movimiento Cosecha will be camping outside the State House, demonstrating that they are not going anywhere and neither is the rest of the immigrant community or their allies. There will be an opportunity for press interviews at 1 p.m. on Friday.

Highlighting the importance of drivers’ licenses for all, Erika Arévalo Arteaga of Cosecha East Boston said, “We are afraid every day, driving our children to school, to work, and to church, but we are not afraid to fight for the rights we deserve. Our community is united and united we will win licenses for all.”

Many undocumented immigrants across our state are left without any other choice than to drive without a license each day, risking their safety every time they get behind the wheel to bring their kids to school, go to work, and support their families. Access to drivers’ licenses is a basic service that the undocumented community deserves, and Massachusetts now more than ever has a responsibility to protect all their residents including thousands of undocumented immigrants from the attacks of the Trump Administration. These issues are directly connected and our state has an obligation to make a change, rather than just talk about it.

Movimiento Cosecha is a national movement fighting for permanent protection, dignity, and respect for all immigrants in the country. Cosecha Massachusetts is currently working on expanding access to Drivers Licenses for all undocumented immigrants in the state.