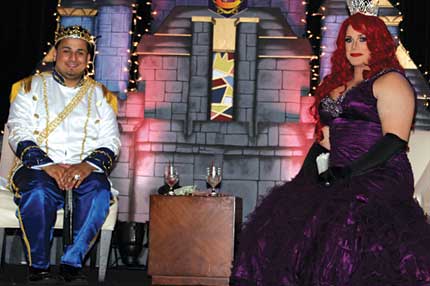 “We put the fun in fundraising. That’s our tagline. That’s what we in the Imperial Court do,” said Nelson Roman, president of ICMA-WD. “For most of our members and myself, it’s almost like, ‘Okay, I’m tired of the normal club scene. I don’t want to just go there to party. I want to do something that is meaningful and gives back.’[ICMA-WD] members, clubs/bars and community members who sponsor and attend our events know that tips they give the queens and the door cover proceeds all are going to charity.”

Tickets to the recent ball were sold at $50 each before July 5 and were $60 after that date. All proceeds went to AIDS Foundation of Western Massachusetts (AFWM) and Springfield Mass Pride.

“A lot of these underdog organizations that really service our LGBT community really need that funding support. They don’t get it a lot of the times because…they’re not part of a big agency and that’s when the Imperial Court comes in,” said Roman. “We can go after the big money and make sure that it gets to those charities that really need it.”

Headliners from the event included recording artist and songwriter Daniel Patrick Ellis as well as RuPaul’s Drag Race star Jujubee. The two had been in contact with Roman through various other drag events and, according to Roman, were excited to be a part of the ball.

“Jujubee is great,” said Liz Mazzie, an employee at Diva’s nightclub in Northampton, Mass. and board member of ICMA-WD. “I’ve met her a few times before. [She is] so kind and just a really genuine person. She started doing drag at Diva’s a long, long time ago.” [pullquote]Headliners from the event included recording artist and songwriter Daniel Patrick Ellis as well as RuPaul’s Drag Race star Jujubee. [/pullquote]

The Imperial Crown Prince and Princess Ball was also an opportunity to recognize Angelo Commisso, whose stage name is Bianca Dubois, for all of his years of service to the LGBT community. The Wednesday night host of a drag show at Diva’s, Commisso received the first ever Diamond Award from ICMA-WD. In the future this honor will be given annually at the ball to any individual, group or business organization/agency that has helped further the LGBT community or helped the HIV/AIDS pandemic.

“This was actually my very first time working with and taking part in anything that had to do with the Imperial Court,” said Commisso, who is a professional makeup artist at a local establishment at the Holyoke Mall. “I am honored that it being my first time, I was acknowledged for my efforts and humbled by being given my title and being so warmly welcomed into such an illustrious group of people.”

“He was truly a pioneer with regards to motivating the community to be politically active. Really, he re-kick started Springfield Pride in this generation,” said Roman. “He’s really just pushed along a lot of the community…he really gets the congressmen, senators, state reps, local mayor, local state reps, to really rally around the LGBT community and our causes.”

Overall, ICMA-WD has deemed their first ever ball a success and has already scheduled plans for next year. The second annual Imperial Crown Prince and Princess Ball will take place on July 14, 2014, once again at the Sheraton Hotel.

“I feel that for the very first function on this scale, it went amazingly,” said Luis Andres Torres, an ICMA-WD Board Member with the title Imperial Crown Princess. “All of the entertainers were impeccable. It was great to see Courts from other states there as well to help support the AFWM and Springfield Pride. I believe when the common goal of a group of people is as noteworthy as this was, everything will always end up being amazing.”

For more information about ICMA-WD and upcoming events, please contact impcourtwesternmass@gmail.com or call 413-777-6411.