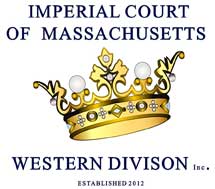 “We are thrilled to be able to have such amazing talent appearing at this year’s event! It is so important for the Court to make a difference in fighting homophobia, stigma, HIV/AIDS and other social injustices, while empowering youth who are our next leaders,” said Roman. [pullquote]Over the past year in its first year the ICMA-WD has raised over $10 thousand for LGBT, HIV/AIDS and youth-enrichment organizations.[/pullquote]

Over the past year in its first year the ICMA-WD has raised over $10 thousand for LGBT, HIV/AIDS and youth-enrichment organizations. The Imperial Crown Prince and Princess Ball is more than just a dazzling display of regal glamour, it is an opportunity to celebrate the LGBT community, and in particular, the colorful cross-dressing segment of that community. Last year it hosted a similar event in August which was attended by close to 150 people and raised a substantial amount for the beneficiaries. This year’s beneficiaries are Springfield Mass Gay Pride and The Aids Foundation of Western Mass.

“The AIDS Foundation of Western Massachusetts is honored to be chosen by the Imperial Court of Mass-Western Division as a beneficiary of its their 1st Annual Imperial Crown Prince and Princess Ball. The funds raised through this partnership will allow AFWM to continue providing much needed support, educational programs and services to the western Massachusetts HIV community. Together our efforts improve the quality of life for those with HIV/AIDS, along with those who love and care for them,” said Robert Quinn, Board of Trustee AFWM.

Tickets are only $50.00 before July 5th, 2013, and $60 after that and at the door. To purchase tickets to the event visit their site: icmawmicp.eventbrite.com.

About the Imperial Court of Mass – Western Division

The Imperial Court of Mass – Western Division, a 501 (c) 3 corporation is Western Mass’s most regal fundraising organization serving the LGBT community. As part of a proud tradition, the Court has raised thousands of dollars for charitable organizations including:  Springfield Mass Pride, Northampton Pride and Diversity, Service Members United, The Bing Arts Center, the Holyoke Equal Rights Association, Out Now of Springfield, and the Aids Foundation of Western Mass. For more information, please visit www.impcourt.org/massachusetts.