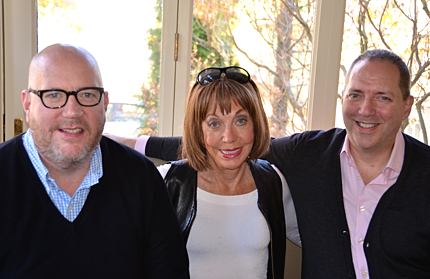 I am writing to share the sad news that Joan Parker, one of our distinguished members of the Greater Boston Parents Families and Friends (Greater Boston PFLAG) Advisory Board, passed away on June 12th. Joan was an educator and community activist and philanthropist. She and her late husband, the acclaimed novelist Robert Parker, epitomized the ideal PFLAG parents. Proud and supportive of their two gay sons, Joan and Robert modeled the kind of behavior PFLAG seeks to promote with all parents: unqualified love and acceptance of their LGBT children. And they took that love and support to its highest form by becoming activists  — committing themselves to making the world safe and inclusive for all.
For decades, Joan was active in a wide range of community service and arts organizations, including the American Repertory Theater, Community Servings, Theater Offensive, The Boston Children’s Theater and, fortunately for us, Greater Boston PFLAG. Joan was also a moving force behind “Shared Heart,” a traveling exhibit of black-and-white photos of LGBT teens that was narrated by the featured youth.
Joan and Robert joined the Greater Boston PFLAG’s Advisory Board in June 2008, and together with Chad and Anne Gifford, served as Honorary Co-Chairs of our April 2008 and 2009 Pride and Passion fundraisers. At the April 2010 fundraiser, Greater Boston PFLAG honored Joan with its Cornerstone of Equality Award. Joan then went on to Co-Chair three successive Pride and Passion fundraising events. Each of these galas was more successful than the one before by all measures, including increasing the amount of funds raised to support of our bullying prevention and family acceptance programs. Beyond that, through her work on our fundraising events, Joan was instrumental in boosting public awareness of our lifesaving, life-changing mission. She became an active member of our Speaker’s Bureau and participated in our workplace based education programs for parents and allies.  She gave generously of her time, passion and expertise and was a brilliant “organizational development consultant”. She frequently opened her Cambridge home for countless meetings and parties for supporters and friends of the organization- in some respects, her Ash Street residence became a second home office for Greater Boston PFLAG.
My predecessor Stan Griffith, our Executive Director Pam Garramone and I will always cherish Joan’s warm friendship and her steady wise counsel. She was our guru and mentor. We are grateful to Joan Parker for all that she did to make the world a better place for all kids and their families.
Greater Boston PFLAG extends our deepest sympathies to Joan’s sons David and Daniel and to their families during this difficult time. The family has requested that memorial gifts be made in lieu of flowers to one or more of the organizations with which their mother was active, including Greater Boston PFLAG.  Those who would like to make a memorial gift in Joan Parker’s honor should consult our website at: http://www.gbpflag.org or call 781-891-5966.
Deborah Peeples, President, Greater Boston PFLAG
Julie Arvedon Knowlton