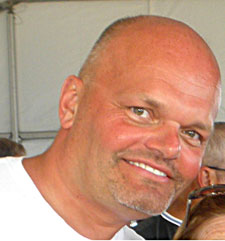 Joe Deegan knows how to raise money—and lots of it. Over the last several years, he has raised thousands of dollars for AIDS Walk Boston and 5K Run. But he sees himself as less of a fundraiser than a crusader. And that passion is key to his success.

“People don’t come right out and say this to me, but I do think a lot of people wonder if AIDS is even an issue anymore,” Deegan says. “But of course it is, especially for gay men.”

Given this, it is vital that younger gay men learn about the epidemic, he says, as those who do not remember the early years of AIDS don’t realize that HIV is still a very serious issue.  AIDS Action, among many other service providers, helps educate and promote testing to younger gay men.

Deegan, an IT worker at a Cambridge nonprofit, is personally motivated to help end the spread of HIV. Fifty years old, he came of age during the early years of the AIDS epidemic. He lost an uncle to the disease as well as several of his friends, two of whom killed themselves shortly after learning that they were HIV positive. “They just thought the worst of it was going to happen and didn’t want to go through it all and ended it right then and there and that was just so tragic,” he says.

“Learning you have HIV changes your life. It puts uncertainty in your life,” says Deegan, who has worked as a volunteer with people who have recently learned that they are HIV positive.

His passion fuels his fundraising efforts. Like many AIDS Walk Boston and 5K Run participants, Deegan makes great use of social media to raise money. But he buttresses his efforts with regular emails to his friends and family members. He keeps a list of those who’ve donated in the past and sends them targeted messages thanking them for their past donations and asking if they’ll consider pledging to AIDS Walk Boston and 5K Run again. [pullquote]“Learning you have HIV changes your life. It puts uncertainty in your life,” says Deegan, who has worked as a volunteer with people who have recently learned that they are HIV positive.[/pullquote]

Deegan’s greatest piece of advice for novice fundraisers is to “think outside of the box.” Deegan, a part-time spin instructor, has leveraged his love of spin to raise money by holding spin-a-thons at the clubs he works at. He also solicits donations from area businesses to give out as raffles prizes to spin-a-thon participants. People like to give, he notes, you just have to ask.

Another of his ideas is to ask a local restaurant to sponsor him by donating a percentage of a night’s proceeds to AIDS Walk Boston and 5K Run. “A lot of restaurants, especially the chains, will take you under their wing and give you one of their slow nights. You just need to get your friends to go out to eat that night,” he says.

Another tip? Make sure people understand that no donation is too small. “You might have people who will say they don’t have any money. You could ask, ‘Well how about $5?’ Because $5 times 20 people is $100 and you’d be surprised how fast that adds up,” he says.

But the bottom line, he stresses, is that the primary job of AIDS Walk Boston and 5K participants is to educate people about HIV and AIDS. “We need to get the word out that it isn’t over and it’s not even close to being over.”

On Tuesday, May 20, Deegan is working in conjunction with Orange Leaf Frozen Yogurt, 76 Lafayette St, Salem, for an all-day fundraiser.  Fifteen percent of sales for the day will be donated directly to this year’s AIDS Walk!