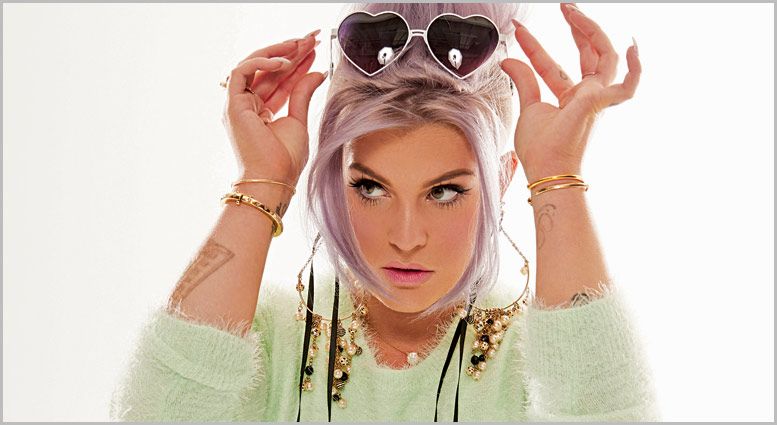 Hollywood spitfire and staunch LGBT ally Kelly Osbourne is feeling tense about her first book, There Is No F*cking Secret: Letters from a Badass Bitch. After all, “What if I change my opinion by the time it comes out?!” she says, laughing because it’s true.

Then there’s our revealing interview, where the opinionated 32-year-old actress, singer and now author – and daughter of Ozzy and Sharon – let her candid thoughts loose on topics ranging from her sexuality (“everybody’s gay”) to her openness about dating women and her issues with celebrities who feign lesbianism for publicity. And that recent controversy over her statement regarding President Donald Trump? She admits it really got to her. Turns out, even badasses cry sometimes.

Q: Kelly, your book, which covers your personal journey to self-acceptance, could have a positive influence on so many young people trying to find themselves.

A: Oh, thank you so much! It’s the most vulnerable thing I’ve done in a while, I can’t lie. I’m kind of like, oh my god, I’ve actually done this, because for the first time in my life I wanted to take my power back, and instead of people telling me who I am, I wanted to tell them.

Q: Who are some of your favorite badass b!tches?

A: I mean, Elton goes without sayin’. Just people who’ve made a difference in my life, like Liza Minnelli. I think Lil’ Kim. It’s anyone who just learned to be themselves and take responsibility for who they are.

Q: When were you first aware you had an LGBT following?

A: I don’t remember a time in my life when I haven’t been submerged in the LGBT community. It’s the only community that, even though I shouldn’t have belonged (laughs), accepted me. It was the only world I ever really felt comfortable in, because, and I say it in my book, I don’t know what it feels like to fit in.

Q: What do you attribute that bond to?

A: I think my relationship, especially with the drag community and the drag world, became so prevalent at such a young age because of Boy George, of course, and Blitz Kids and that huge movement in the U.K. I think drag queens choose how they want you to see them and they do that knowing that they’re probably going to get a lot of shit for it, and that’s what magic is. That’s like, “F#ck you, this is who I am,” and you can wake up every day and be whoever you want to be. I love that.

Q: When did drag first come into your life?

A: It’s never not been in my life. I mean, my mom was calling up (a drag club) in San Francisco; I was, like, 11 or 12 and being snuck into a drag bar. It was amazing. And there was a time I went to go see Cyndi Lauper on tour when she was playing in the U.K., and she used to have, like, 20 drag queens on tour with her. I was probably about 9 or 10.

Q: How much of your gay submergence do you credit to your mother?

A: It’s equally my mom and my dad. In rock ’n’ roll, you were the outcasts back then and outcasts tend to find each other, especially in London.

Q: How about Boy George – what was his influence on you?

A: I remember staring at my TV, thinking, “Is it a beautiful woman or a beautiful man? It doesn’t matter.” He was the first person to break down barriers. He single-handedly changed people’s perspective so much. And he’s such a smart man! If you ever sit down and have a conversation with him about his political views and his opinion of the gay community, he says things that are so spot on and so important because he’s lived long enough through good times and bad times to see what things really are. I love talking to him. And he has the most beautiful eyes you’ve ever looked into!

Q: You recently wore a hat emblazoned with the words “I Am Gay.” Were you being literal?

A: You know my honest opinion? Everybody’s gay. It is a strictly human thing. You can’t put a gender on love.

Q: But I know a guy – several of them, in fact – who insists he’s only into women.

A: Except he’s letting a guy suck his d!ck! If you ain’t tried it, you don’t get to tell me what you are.

Q: Are you open to loving a woman?

A: I’m open to loving anybody. It’s about the person. I don’t think it’s about sexuality at all.

Q: Your mother came out as bisexual last year. What have you learned about yourself from her regarding sexuality?

But it’s not like I’m trying to be forward-thinking or progressive – it’s just that sexuality is a word I try not to even define the way the world defines it. It’s the person who you are sexually attracted to.

Q: Do you not label your sexuality, then?

A: My whole rule is, never say never. I’ve never been in a relationship with a woman, but I don’t know that it’s not a possibility. But I also don’t like it when people claim to be gay and then not. There’s this whole generation of young Hollywood girls who can’t find love where they think it’s supposed to be, and then they come out being gay and two weeks later they have a boyfriend. It drives me nuts! I think it takes all the proactive work the LGBT community has done and sets them back. Oh, so now you’re gay? Then two weeks later: “Oh no, that was just a phase.” You don’t get to do that.

I’ll tell you who’s the worst with it: young female celebrities. And I’m like, I know you. I’ve known you pretty much since before you used to shit outside of a diaper. You are not gay! But I think outing somebody in that way is just as bad as outing somebody who has not come out of the closet. It’s one of those things I have to keep to myself… and it drives me f#cking crazy! I’ve marched till my feet bled for the right of equal love in the gay community, and you’re just gonna step in because it looks cool for you and now tell everybody that you’re a lesbian when you’ve never even seen another puss that’s not yours so you can get attention?

Q: Where are we at with you having a baby with your gay best friend?

Q: You’ve been to a lot of LGBT events: Pride with your mom, where you shut down protesters; Elton John’s wedding. What’s the most memorable gay event you’ve been a part of?

A: Oh my god, that’s so hard to pick! I can’t really think of an event that’s not a gay event. When you really think about it, what major party have you ever been to that was put on by a straight person? Because I can’t think of one.

Q : You tell me. I’m not the one going to Elton John’s birthday party.

A: It was really fun, actually. (Laughs)

A: So, my favorite gay Christmas event is anything with Mariah. She just brings out the best in everyone. Everyone’s crying, being emotional.

Q: I love that you consider a Mariah Carey Christmas concert a “gay event.”

Q: Late last year, while receiving the Trevor Hero Honoree Award at the Trevor Project’s TrevorLIVE Los Angeles 2016 fundraiser on Dec. 4, during part of your speech you said, “We have to give (Trump) a chance. And we do it by spreading love, not hate.” Do you believe we should still give him a chance?

A: I think we should give… you have to think about it. If we’re being told the truth, which we never really are, people voted for him, and at that time when I said that he hadn’t been inaugurated yet. I’ve had to stop watching TV when it comes to politics. I only watch – I think you can hear it in the back; I watch BBC News so I can get a different perspective, because in different countries they show you different things that you don’t see here. It’s a really scary time that we’re living in, and I’m not gonna pretend that it isn’t.

Q: What scares you most?

A: The way that people feel totally lost, don’t feel safe. When people don’t feel safe, it manifests and comes out in evil ways. There’s a lot of evil going around right now when we were finally at a place where people were ready to love. Now people are just ready to point fingers, judge and blame.

I don’t get to vote. I’m still going through the process of citizenship in this country – if it goes through, because I don’t know how things are going to change. I do encourage people to vote, but when we went down to downtown L.A. to check out the marches after the election, I asked people, “Who did you vote for?” Nine times out of 10, people said they didn’t vote. I was so confused! Like, why are you here?

But I have to keep to myself right now because I don’t want to enter into this political cannibalism that’s going on where people say stuff and then everyone just eats you alive for your opinion. Every attempt I have made in defending the (LGBT) community I somehow manage to fuck it up and piss everyone off. I cried over the backlash of the Donald Trump thing with my speech, because if you read my whole speech, you’d get what I was saying, but they put that one sentence in there and I was like, “You d!cks.”

Q: How are you feeling about where we are headed regarding LGBT rights?

A: I don’t know – and that’s what’s scary. I mean, I’m sorry, you cannot give somebody the right to marry and then take it away from them. You can’t do that. You just cannot do that. But what I’ve learned right now, because everything is so confusing and every single day threats are made and until you fully understand what’s going on, it’s like, keep your opinion to yourself.

I’m aware that there’s gonna be a lot more to fight for in our present time. Until I know exactly what it is that I’m fighting for – everything keeps changing and one day this, one day that, and no one can figure out whose side to be on. People can only figure out how to hate, and I refuse to do that.

*As editor of Q Syndicate, the international LGBT wire service, Chris Azzopardi has interviewed a multitude of superstars, including Meryl Streep, Mariah Carey and Beyoncé. Reach him via his website at www.chris-azzopardi.com and on Twitter (@chrisazzopardi).