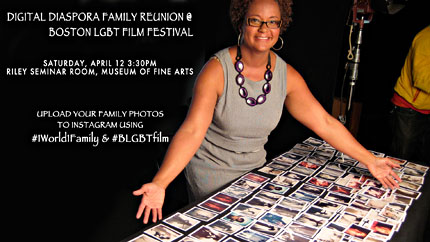 HARLEM, NY – Award-winning filmmaker and openly gay director/producer Thomas Allen Harris’ documentary film, Through a Lens Darkly: Black Photographers and the Emergence of a People, will debut at the Boston LGBT Film Festival on Saturday, April 12, 2014 at 1:30 p.m. This epic film, about contemporary artists and scholars probing the recesses of the American dream by interrogating images of stories suppressed, forgotten and lost, is the first documentary to explore the role of photography in shaping the identity, aspirations and social emergence of African Americans from slavery to the present. The film brings to light previously hidden and largely unknown images by both professional and vernacular African American photographers which add to our understanding of history by providing a window into lives, experiences and perspectives of Black families that is absent from the traditional historical canon. The film draws inspiration from the work of Marlon Riggs, particularly his ground-breaking Tongues Untied, in its assembly of a diverse yet focused community of storytellers to follow and transform a singular journey into a communal journey of discovery and a call to action. The film highlights LGBT artists of color, such as Lyle Ashton Harris, Glenn Ligon, Lola Flash and Carla Williams, who are rethinking the archive and its relevance to issues of identity and representation.

“My whole team and I are extremely excited to return to Boston,” says Thomas Allen Harris who attended Harvard College. “Inspired by the work of our co-producer Deborah Willis, this project has been ten years in the making. We’re looking forward to audiences experiencing this incredible content, much of which has never been seen before.” [pullquote]The film highlights LGBT artists of color, such as Lyle Ashton Harris, Glenn Ligon, Lola Flash and Carla Williams, who are rethinking the archive and its relevance to issues of identity and representation.[/pullquote]

THROUGH A LENS DARKLY will make its debut at the Boston LGBT Festival, the fourth oldest LGBT festival in North America and the largest LGBT media event in New England. The festival is hosted by the Museum of Fine Arts.  The innovative transmedia companion to the film, Digital Diaspora Family Reunion (DDFR) will make its debut at Boston LGBT Film Festival as well on Saturday, April 12, 2014 at 3:30 p.m. DDFR re-imagines the social network by inviting audiences to participate in building the ONE WORLD-ONE FAMILY ALBUM by uploading and sharing their own family photos. Started in 2009, DDFR has held 15 live events, in 6 cities, generated 8.2 million media impressions, conducted over 700 interviews, gathering over 8,500 photographs in the process, which are part of a virtual user-generated family photo album that compliments the content of the film and celebrates shared values which underlie the American Experience. DDFR is open to everyone and audiences are invited to upload images to Instagram using #1World1Family to tag their photos, a selection of which will be shown at the Boston LGBT Film Festival. This will be the first LGBT-focused DDFR event in DDFR history, the event is free and open to public, please rsvp at www.bostonlgbtfilmfest.net.  We invite everyone to share their family story and become part of our DDFR family.

“Everywhere we’ve gone, the audience has been overwhelming,” says Thomas Allen Harris. “As a member of the LGBT and African American communities, there is a real need for telling our stories that the film and DDFR are tapping into and that’s really satisfying.”

This will be Thomas Allen Harris’ first feature-length documentary to make its premiere at the Boston LGBT Film Festival. The film will have its theatrical debut in Fall 2014. The highly accomplished director has been pushing the boundaries of the documentary form throughout his career and THROUGH A LENS DARKLY represents his most ambitious foray into merging film, art, social media and live events into an immersive experience that pierces the boundaries of the screen. With DDFR, Harris hopes to ignite a movement across the country, just as he’s done in the communities where DDFR has already played. In 2014, Harris hopes to bring the film and DDFR to 15 major markets and is looking for sponsors and partners interested in the core family demographic that he is targeting. To learn more about DDFR, visit www.1world1family.me.