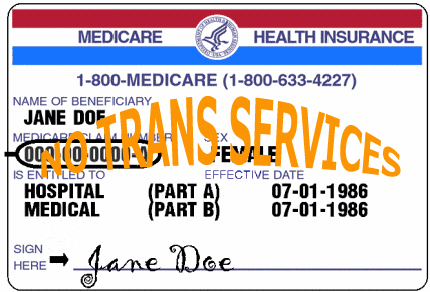 “Medicare’s categorical exclusion of this care lacks any scientific basis,” said Shannon Minter, the Legal Director at NCLR. “Study after study has shown that these surgeries are the only effective treatment for many patients suffering from severe gender dysphoria.”

Ms. Mallon joined the United States Army when she was 17 years old and worked as a forensics investigator for a city police department after she was honorably discharged from the Army. She was later diagnosed with gender identity disorder, a serious medical condition that is characterized by intense and persistent discomfort with one’s birth sex.

“The American Medical Association, the Endocrine Society, and the American Psychological Society all support these treatments for transgender patients,” said Joshua Block, a staff attorney with the ACLU’s LGBT and AIDS Project. “These procedures have been performed for decades and are proven to be safe and effective.”

Medicare adopted the ban, which is codified as National Coverage Determination (NCD) 140.3, more than thirty years ago. Decades of extensive scientific and clinical research since that time have established that these surgeries are safe and effective.

As a result of the administrative challenge, the Department Appeals Board (DAB) of the U.S. Department of Health and Human Services (HHS) must review the ban, determine whether it is reasonable based on current standards of care, and reverse it if it is not.   The DAB is staffed by career civil servants who have been tasked with providing an impartial independent review of disputes concerning Medicare and other HHS programs. Earlier last week, the HHS Centers for Medicare and Medicaid Services (CMS) on its own initiative included a statement on its website that it would be reconsidering the ban.  CMS subsequently withdrew its proposal to reconsider the ban and through a spokesperson explained that the ban would instead be reviewed through the independent DAB process.

“What matters to us is that there will be a fair and scientifically based review of the ban.  We don’t think the medical data supports it and are hopeful that CMS will agree,” said Jennifer Levi, Transgender Rights Project Director for Gay & Lesbian Advocates & Defenders.

The National Center for Lesbian Rights is a national legal organization committed to advancing the human and civil rights of the lesbian, gay, bisexual, and transgender community through litigation, public policy advocacy, and public education. www.nclrights.org.