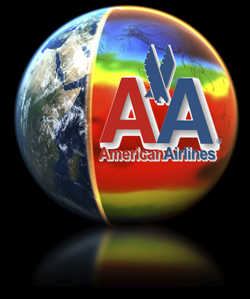 The three national LGBT groups sent an open letter to American Airlines, condemning the company’s “aggressive effort to prevent approximately 10,000 of your employees from holding a legal election to determine whether or not they will join a union.” Read the letter here: http://prideatwork.org/open-letter-to-american-airlines.html. And learn more about the campaign here: http://prideatwork.org/american-airlines.html

The groups acknowledge the support that American Airlines over the years has demonstrated for full LGBT equality for all citizens.

However, for many LGBT workers, the only protection they have against workplace discrimination is through a legally enforceable collective bargaining agreement. “Many of the company’s passenger service agents who are LGBT live in states like Texas, Florida, North Carolina and Arizona that have little or no legal protections against workplace discrimination or for family recognition,” they wrote.

“We understand the differences between attempts at marketing to our community and being fully supportive of all workers’ rights to achieve full equality in our society.  We encourage you to stand behind the principles you’ve supported in the past by halting your efforts at delaying a union election for your passenger service agents,” they wrote.

“Workers deserve the chance to exercise their legal workplace democratic rights and you should let that election proceed as currently planned without interruption,” the groups added.

Ken Merker has been an American Airlines agent in Miami for 20 years. “It gives me comfort knowing that American has been at the forefront of supporting LGBTQ issues as the airline industry has been home to many in our community. But the outsourcing of positions that had given us a chance at good jobs makes me question my future here. We’ve been fighting for our rights as a community for so long the last thing we need is for corporations to deny our right to vote in an election,” he said.

Steve Langhi, an agent at Dallas-Fort Worth said, “knowing how the company is trying to obstruct us in our election has a definite effect on the LGBTQ community because of our high profile in the industry.“

The LGBT groups called on American Airlines to stop its needless and frivolous legal delays and allow agents to exercise their democratic right to vote in the Dec. 4, 2012-Jan. 15, 2013 election period that has been set by the National Mediation Board. “Further delay for them is unacceptable,” they declared.

CWA, the largest telecommunications union in the world, represents over 700,000 men and women in both private and public sectors, including over half a million workers who are building the Information Highway. CWA members work in telecommunications, broadcasting, cable TV, journalism, publishing, manufacturing, airlines, customer service, government service, health care, education and other fields.