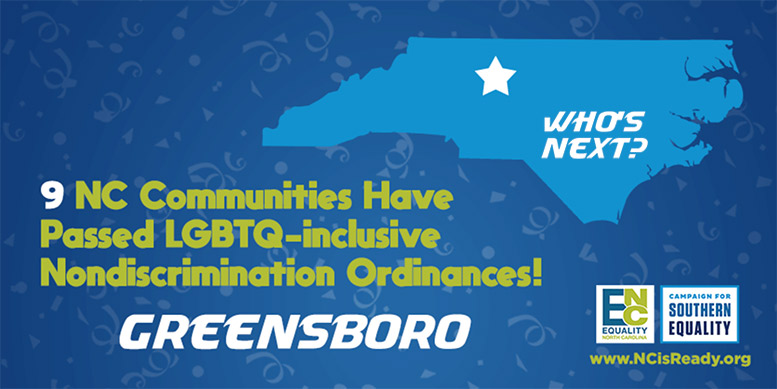 LGBTQ-Inclusive protections for people in Asheville, Durham, Greensboro, and Buncombe County are now officially in place and protecting the community from discrimination in private employment and public spaces

NORTH CAROLINA—Today, LGBTQ-inclusive nondiscrimination ordinances passed earlier this year take effect in four different North Carolina communities —Asheville, Buncombe County, Durham, and Greensboro. The ordinances ensure protections in private employment and places of public accommodations — such as restaurants and businesses – from discrimination based on sexual orientation and gender identity. Studies have shown that 1 in 3 LGBTQ people – including 3 in 5 transgender people — have experienced discrimination in the past year.

In total, nine communities in North Carolina have passed LGBTQ-inclusive nondiscrimination ordinances in the past six months. In addition to the four taking effect today, ordinances have been adopted by municipal governments in Apex, Carrboro, Chapel Hill, Hillsborough, and Orange County. Polling shows that 67% of people in North Carolina support protecting LGBTQ people from discrimination.

“It’s only fitting to close out Pride month with these four cities leading the charge to bring lifesaving protections to all of our communities,” said Kendra R. Johnson, Executive Director of Equality North Carolina. “These ordinances, which include protections along the lines of sexual orientation, gender identity, natural hair, and more, are the first step towards building a North Carolina that affirms and supports its most vulnerable communities from the top down. We hope to see other cities, towns, and counties join this movement to build a better North Carolina for all those who call it home.”

Allison Scott, Director of Impact & Innovation at the Campaign for Southern Equality, said:

“On the heels of Pride Month, I’m thrilled that more LGBTQ North Carolinians can find comfort and safety in knowing that they are protected from discrimination in key areas of life. Local leaders from Asheville to Durham and many communities in between have taken action to ensure that LGBTQ residents and visitors can live with dignity and equality, and other cities and counties — and ultimately, the state and federal governments — should join them as soon as possible. A supermajority of North Carolinians are ready for LGBTQ protections because they understand that everyone deserves an equal opportunity to thrive.”

Based in Asheville, NC, the Campaign for Southern Equality promotes full LGBTQ equality across the South. Our work is rooted in commitments to equity in race, gender, and class.