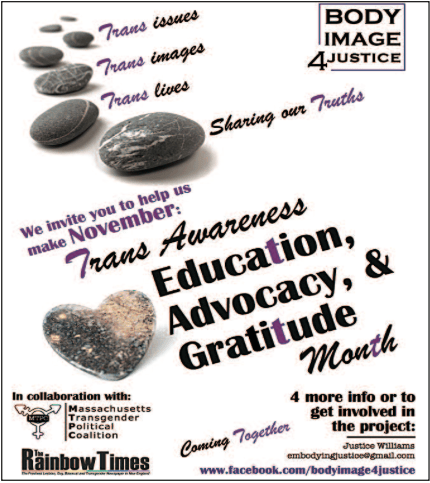 BOSTON, Mass.—November is Transgender Awareness Month. This is a time for individuals and communities to celebrate the diversity of the transgender community, acknowledge the meaningful contributions of transgender people, and raise awareness to the challenges transgender individuals still face for feeling safe and protected in their communities. This year, Body Image 4 Justice, the Hispanic Black Gay Coalition (HBGC), the Massachusetts Transgender Political Coalition (MTPC), and others have teamed up to host a series of events to celebrate Transgender Awareness Month in the Boston area.

The month will kick off with a launch party, “Light up the Night” on November 8th at 6:30 p.m., hosted MTPC. “This is an event to celebrate our community, our achievements, and our talents,” said Mason Dunn, Executive Director of MTPC.

On November 8, 2014, Body Image 4 Justice will host Transmasculine Show and Tell. The event is an accountable, confidential, non-competitive and non-judgmental space for people on the transmasculine spectrum to share their body challenges and receive support and solutions. The event will take place on the 9th Floor at Fenway Health from 10 a.m.-12 p.m.

Then, on November 15, 2014 HBGC will host its 5th Annual Gala honoring Tiq Milan and Bamby Salcedo, two national trans leaders of color. Tiq Milan will receive HBGC’s Audre Lorde Founders Award. GLAAD’s national news senior media strategist, Milan has also raised awareness to the experiences of trans individuals of color through various documentaries, media campaigns, and news interviews. Bamby Salcedo will be the recipient of HBGC’s James Earl Hardy Legends Award. Salcedo is founder and President of The Trans-Latin@ Coalition. She is also recognized nationwide for her advocacy work related to trans and health care issues. The event will be held at the Marriott Courtyard located at 275 Tremont Street in Boston from 7 p.m.-10 p.m. Tickets can be purchased online at hbgc-boston.org.

From November 14-16, 2014, Boston will welcome filmmaker and writer Kortney Ryan Ziegler to host Trans*H4CK at Harvard University. Trans*H4CK is A hackathon and speaker series that radically shifts the ways trans* people live by creating technology that economically empowers, improves access to social services, promotes gender safety and community sustainability, while bringing visibility to trans* people in technology. The event will be held at the Harvard Innovation Lab at Harvard Business School. More information can be found at www.transhack.org.

Other events will take place during the month. To find out more information about them, visit The Rainbow Times. In addition, The Rainbow Times, as part of its sponsorship of Trans Awareness Month, will run a supplement highlighting Transgender leaders throughout New England, the events taking place, transgender stories by trans writers, etc. Lastly, TRT will donate ticket entrances to transgender events taking place during the month, as part of its unwavering and continuous support of the transgender community and its allies.

The month will close out with Trans* Day of Remembrance hosted by MTPC on November 23. Featuring guest speakers, performers and a candle light vigil, the annual gathering is a time to raise awareness to violence against transgender individuals and memorialize the lives who have been lost due to transphobia. The event will take place on November 23, from 4-7 p.mm at the University Lutheran Church, located at 66 Winthrop Street in Cambridge.

For more information on these events, and other events hosted for Transgender Awareness Month, please visit: www.masstpc.org/community-events/tdor/.

Founded in 2001, the Massachusetts Transgender Political Coalition (MTPC) is dedicated to ending discrimination on the basis of gender identity and gender expression.

Formed in 2013, BodyImage4Justice (BI4J) aims to bring the LGBTQ community together through the common cause and interest of body image, health and wellness.

Founded in 2009, The Hispanic Black Gay Coalition (HBGC) works to inspire and empower Latin@, Hispanic and Black LGBTQ individuals to improve their livelihood through activism, education, community outreach, and counseling.

Boston-based, The Rainbow Times is a minority owned publication–half Hispanic, 100% gay. As a New England LGBT newspaper founded in 2006, The Rainbow Times is a liaison that increases awareness of LGBT issues and serves as a vehicle to unify and strengthen the communities throughout the New England region while providing quality news to its diverse readers. TRT has always had a transgender community member as a part of our team since it published its first print issue in February, 2007.