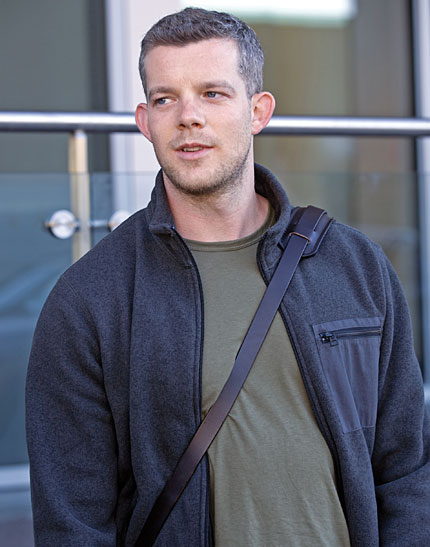 Despite roles in the BBC supernatural drama Being Human and The History Boys, both on stage and screen, it’s the HBO dramedy Looking that has presented Russell Tovey with considerable exposure. Premiering in early 2014, the show centers on a group of gay friends in San Francisco as they navigate relationships, family and sleeping with your boss. When Kevin (Tovey) and Patrick (Jonathan Groff) finally got down to business during a steamy lay at the end of the first season, the hunky Londoner revealed more than his acting chops.

As Looking returns to the network, the 33-year-old opened up on a variety of topics: his mom’s reaction to his thigh thump with Groff, the advantages to shooting a sex scene with a gay actor and how, despite his famous butt, fans of the show who meet him aren’t “rape-y.”

Chris Azzopardi: The Season 1 finale set the stage for a whole lot of drama. What does that mean for this upcoming season?

Russell Tovey: Season 2’s gonna pick up three months on with the fallout from that experience with Patrick, Kevin and Richie (Patrick’s boyfriend played by Raúl Castillo). They go away on a big adventure and it all unravels. What it means is there’s gonna be tension, and what unfolds is going to be very good television. And I love it. I love seeing #TeamKevin / #TeamRichie. People are really loyal to Kevin or Richie. They’re like, “Sorry – I really like you, Russell, but I’m #TeamRichie.” “Kevin’s a cheat!” “Leave Patrick alone!”

Q. What’s your hope for Kevin and this love triangle he’s gotten himself into?

A. I want Kevin to be happy, but I want him to find his way to happiness with a lot of drama that’s gonna be entertaining for an audience watching an HBO show. (Laughs) But he has to fuck things up, and I think that’s part of his personality. The more Patrick gets to know him, that’s gonna unravel.

Hmm… would I fuck myself? Or would I fuck Raúl? (Laughs) If I could have a threeway, it’d be quite nice. You know, a bit of both. But in reality, you’d want a boyfriend like Richie because he could cut your hair, and that’s great – you don’t have to worry about that expenditure every month. He’d do that for free! And he can play guitar, so he can entertain you.

Q. Or, of course, there’s Kevin, who appears to be – at least from the Season 1 finale – experienced in bed.

A. Totally. I’ve done all the research.

A. It makes it so much more relaxed. I’ve had sex scenes with girls, and I feel very relaxed because I’m not worried about anything popping up – I’m just worried about her world and making sure she’s comfortable. When I’ve done stuff with Joe Williamson (Tovey’s boyfriend on Looking) – and we’re hugging and kissing and whatever, and he goes for it – I feel a slight responsibility to make sure that he doesn’t feel I’m taking advantage of the fact that this has been written. I don’t want him to feel uncomfortable, so I feel a responsibility to him in a different way than I do to girls.

With Jonathan, doing these sex scenes just feels so cool. We’re such good mates now, and we laugh and we love doing our scenes together. You can do anything; your hands go everywhere, and it’s fine. Neither of us at any point feels uncomfortable, and that’s why it’s so good. We just completely trust each other, and we go for it. Neither of us hold back or feel any pang of responsibility for the other one when it comes to that. We just trust each other on a completely open level. Either of us could go to the other, “Hey, you should put your dick in there.” (Laughs)

Q. Are you saying that you and Jonathan basically direct your own sex scenes on the show?

Q. Will you have more sex scenes with Jonathan in Season 2?

Q. How do you feel about all the attention your behind has gotten on social media?

A. In the future, I imagine myself looking back and going, “God, I had a nice a$$. Glad I got that out.” If it’s there now, I’m getting it out because it’s not always gonna look like that. I don’t want to hide it. And it’s nice that people like it. I’ve been very lucky. I’ve grown it myself, and I also have my parents to thank for it being well-received.

Q. What kind of influence do you see this show having?

A. It’s such a true voice for gay people. Everyone all around the world is able to see their own friends in all these characters. In the gay community, everyone wants stories. Every show (like Looking) that comes out is another kind of stamp in the world to say, “This is happening. This is here.” This is another show that proves how normal this is. This show is where we are now – in a place where it feels we’ve moved on so far that we’re able to make a show like this. Here we are – not bad people who are having coming out problems, where not everyone is dying of AIDS. This is, right now, what it’s like to be a gay man who can get married and adopt. Suddenly, you can sign up to the heterosexual blueprint.

Q. Growing you, did you have a “true voice” in entertainment?

Q. So what finally inspired you to come out?

A. I had really close family friends. Myself and one of my best mates now – our dads went to school together – came out to each other when we were like 14, 15. He was very out and proud, and he was going out to all the gay clubs when I was a kid. I was so scared to do it, but I went out with him. Going out with him I realized there are other people like me out there, and I was like, “Cool, this is all right.”

But there wasn’t anybody in the public eye that made me go, “Oh, thank you.” There were no Tom Daleys, no big coming out stories inspiring me to come out. I do remember seeing the film Beautiful Thing as a kid and my mom coming up the stairs to go to bed and me turning it off and going “Night!” I waited till she went to bed to put it back on, and I remember being awe-struck at this film, and crying and being like, “Oh my god, that’s me.” Beautiful Thing was actually a huge part of my coming out experience.

Q. How often are you recognized while filming Looking in San Francisco?

A. Oh, every day. Where I was living in the Castro, I would get into a routine of having breakfast, lunch or coffee, going to the gym, buying a newspaper, and there’s such community there. Where I live in London, it’s like a community where it’s “Morning, Russell!” and seeing people is just a part of your routine. That’s completely what’s so wonderful about San Francisco. And everyone is very respectful. I don’t ever feel under threat or in a rape-y situation. It feels like they are thrilled that we’re there, and we are thrilled to be there. It’s a mutual love for the city and us, which is nice.

Q. You had a birthday recently. Whose idea was it to make you a cake that said, “Birthdays are like rim jobs … open up and get ready for another great year!”?

A. (Laughs) Someone in production. Ahh, as the season goes on you’ll see where that comes from.

A. It might if it stays in! But (the cake) was very nice. We were on a night shoot during our lunch and that cake turned up and I was over the moon. My mom and dad were like, “Oh, I love the cake. Not sure about the rim job. Yeah, not sure of the words – but the cake looks lovely!”

But they love it. I took my mom to Folsom Street Fair when I was filming. We hung out with drag queens, transgenders and people with HIV. I gave her the full education. She absolutely loved it! She’s fascinated by it all, and she was asking people why they had silicone in their testicles and piercings in certain areas of their bodies. She’s awesome.

She watched Season 1 as well. I said to her not to watch the last episode. She said, “All right,” but then she did and said, “I saw your little bum going up and down.”

Q. Was it required of you to show off your assets during auditions?

A. No, no. I was actually originally up for Patrick – Jonathan’s part – and I didn’t get it. They were like, if (the show) gets picked up, we wanna write you a part. I was like, “Cool, but I’m not holding my breath,” because you hear that a lot. Then they wanted me to go out for this part of Kevin, and I was like, “OK.” I did the (audition) in American – I wanted to make it American – but at the end, as I was leaving the room, I did it in English because I knew they’d ask for it in English. They came back and said, “We loved the English! The Brit, the Brit!” So yeah, I didn’t have to show my genitals; it was merely my acting talent. (Laughs)