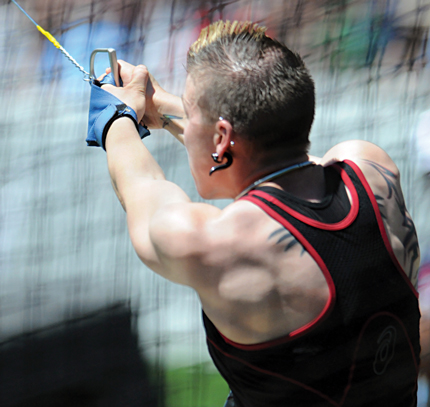 Keelin Godsey attempted to become the first openly transgender athlete to compete for the United States in an Olympic Game this past June.
Photo by: Becky Miller

Keelin Godsey attempted to become the first openly transgender athlete to compete for the United States in an Olympic Game this past June.
Photo by: Becky Miller

A decade after beginning his career in the hammer throw, Keelin Godsey attempted to become the first openly transgender athlete to compete for the United States in an Olympic Game this past June. Although the North Adams, Mass. resident missed qualifying for the London Games by 11 inches, he was proud of what he accomplished.

“I was doing it for me honestly. That sounds selfish, but at the same time I feel like I had to. I was trying to be a role model for myself, quite frankly,” said 28-year-old Godsey during a phone interview with TRT. “I could prove that you could still do it and be highly competitive, and it doesn’t matter how you identify as long as you still compete.”

The 5’9″ competitor began his athletic venture into the discus, hammer, shot put and weight throw while attending Bates College, where he graduated in 2006 as a 16-time All-American athlete. It was during the summer before his senior year that Keelin announced his transgender identity, and tossed his birth name, Kelly, aside.

“That was the only thing left – it was the end of the rope, it was the end of my sanity,” explained Keelin, who now works as a physical therapist when he’s not training. “The effects it had on having trans athletes [as well as] other people coming out, hopefully they were positive, but I was doing it more for me.”

Whether as an NCAA Division III athlete, or competing in the developmental and elite levels, he was required to follow strict organizational rules about what ways he could transition to a male body. These rules include prohibitions from pursuing surgery or testosterone therapy, and continue to apply to Keelin throughout his career in track and field.

There are some leagues that do allow transgender athletes to compete, despite any transitions participants may have made, such as Boston’s Beantown Softball League. The organization has two teams, the Barnstormers and the Trailblazers, whose mission statement includes being, “a softball team dedicated to creating a fun and safe space for gender non-conforming and trans people.”

“It has become a second home for me,” said Maxwell Ng, a Somerville resident who runs the Barnstormers. “It really was just a group of people who wanted to get together to play, and it has become this community that just welcomes everybody regardless of gender, body [or] playing ability. It’s becoming incredibly social, it’s such a supportive group – I’ve got some really fantastic friends.”

Despite having multiple games almost every single weekend between the end of April through June, the competitive edge isn’t always there. After a 27 year hiatus from softball, 53-year-old Chris Miller now participates on the Barnstormers, as well as a men’s team in the greater Boston area. After almost three years of testosterone therapy, he feels confident enough to participate with biological males. A former NCAA Division I field hockey player and recreational weightlifter, he did not want his transition to get in the way of his life as an athlete.

“On a softball field I try: I’m very muscular, I work really hard on my body. So part of it for me is about pass-ability. Both in how I look physically and how strong my body is, as well as how that affects positively my performance,” said Miller, who also plays competitive poker.

Across the Northeast, it appears there is no shortage of transgender athletes passing and performing well in athletic events alongside their cisgender counterparts.

“I was pleasantly surprised that [Keelin] got to where he was, and I was disappointed that he didn’t make the team. But it made me feel very proud as a transgender person to see Keelin up there getting out and doing that,” said Gunner Scott, Executive Director of the Massachusetts Transgender Political Coalition. “It’s important to help change the culture and the way people treat us.”

TRT asked Keelin about what was next for him in the sports world, but the athlete declined to answer by saying, “I don’t know if I want to try something else yet. I’m just going to kind of pass on answering because I’m still trying to work that out. A lot of things have been thought out and I just don’t really want to say anything, just because I haven’t talked to everyone in my life yet either and those people deserve to hear it from me first.”

Older Trans Women And Their Search For Cis Partners