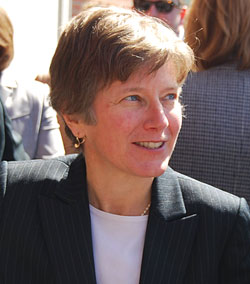 “Mary embodies the fighting spirit of the Stonewall riots, always determined to stand up for justice,” said Lee Swislow, GLAD’s executive director. “We are so proud of Mary and grateful for her work and landmark accomplishments over the years.”

Bonauto co-led GLAD’s efforts in two challenges to the Defense of Marriage Act (DOMA), and achieved the first appellate ruling that declared DOMA Section 3 unconstitutional in Gill v. OPM. She is currently coordinating the amicus brief strategy in Windsor v. United States, a DOMA challenge that will be argued in front of the United States Supreme Court.  She is also involved in litigation, lobbying and public education on a wide variety of issues affecting the lives of LGBT people. In 2003, Bonauto served as lead counsel in Goodridge v. Department of Public Health, which made Massachusetts the first state where gay and lesbian couples could legally marry.

“Our cases have allowed us to enforce the common humanity of gay people and to remind people of our principles of fair treatment under state law and the U.S. Constitution,” said Bonauto.

Bonauto served as co-counsel in Baker v. Vermont, leading to Vermont becoming the country’s first state to grant civil unions with legal benefits similar to marriage.  She joined GLAD colleagues and Connecticut co-counsel in litigating Kerrigan v. Dept. of Public Health, which made Connecticut the third state to authorize marriage for same-sex couples.

Bonauto was honored along with Matt Nosanchuk, associate general counsel for legal counsel at the U.S. Department of Homeland Security in Washington, D.C. and Mia F. Yamamoto, a criminal defense lawyer and human rights activist in Los Angeles. The commission presented the Stonewall Awards Feb. 9 during a reception at the 2013 ABA Midyear Meeting in Dallas.