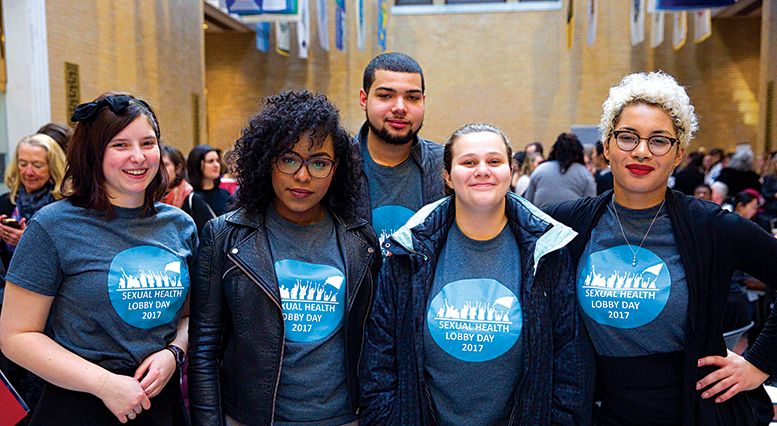 Amid turmoil in the national political scene, legislators and advocates in Massachusetts are pushing hard to pass legislation to protect LGBTQ people.

“A lot of these [bills] have been introduced before,” said Deborah Shields, executive director of MassEquality, a grassroots advocacy organization working to protect vulnerable populations from discrimination based on gender expression, sexual orientation, and gender identity.

In the current legislative session in Massachusetts, MassEquality, Planned Parenthood League of Massachusetts (PPLM), and other organizations are advocating to have bills passed, which would provide LGBTQ people with more legal protections.

Many of the bills, Shields said, are making multiple rounds through the Legislature simply because, “one for each community” is all State House is willing to take.

“Many of these bills have been introduced before, but as we were told in the last session, several [legislators] said they would only do so many LGBTQ bills in any session,” she said.

Sen. Julian Cyr (D-Truro), an openly gay man, said legislators have so many bills to consider each session that it can be difficult to prioritize them.

“We all struggle to be able to pay attention to everything because there’s so much coming at each individual legislator,” Cyr said. “There’s been a tendency to say, ‘Here [are] the priorities for this session.’ I think part of that is a lot of competing demands for priorities in the State House.”

Cyr is a sponsor of the bill SD.2023, “An Act Relative to HIV Screening and Prevention.” The bill would direct the Massachusetts Department of Public Health to research the costs associated with requiring insurance companies in Massachusetts to reimburse patients being tested for HIV and other sexually transmitted infections.

Another bill, SD.1272, “An Act Relative to LGBTQ Awareness Training for Aging Service Providers,” is on MassEquality’s legislative agenda. The bill would require the Executive Office of Elder Affairs to develop a curriculum to train elder service providers on how to appropriately care for LGBTQ seniors in Massachusetts.

Shields said the bill would stem the tide of LGBTQ seniors going back into the closet. Home health aides, nursing home employees, and senior living center staff among others would be provided with training developed as a result of this bill.

“Anyone who receives state funding to do elder affairs work would receive this kind of training,” Shields said.

The Williams Institute at the University of California at Los Angeles School of Law released a 2016 study called “LGBT Aging: A Review of Findings, Needs, and Policy Implications,” which shows LGBTQ seniors often do not disclose their gender identity or sexual orientation because they fear discrimination.

This leads to poorer physical and mental health outcomes on average compared to straight, cisgender seniors.

“So many elders in our community talk about being discriminated against, or having horribly insensitive things said to them,” Shields said. “There [are] reports of thousands of elders going back into the closet.”

Sexual conversion therapy, as defined by the American Psychological Association, refers to therapeutic practices aimed at eliminating the urge for people to feel sexual desires for the same sex. There are also widespread therapeutic practices that seek to change gender identity, specifically the gender identities of transgender people. In Massachusetts, conversion therapy, efforts to change sexual orientation or gender identity in a mental health setting, is legal, though many organizations and professional medical affinity groups have disavowed the practice.

SD.1213, “An Act Relative to Abusive Practices to Change Sexual Orientation and Gender Identity in Minors” looks to ban licensed psychological professionals from engaging in the practice of changing the gender identity or sexual orientation of any minor under the age of 18.

Another bill, HD.2600, “An Act Relative to the Health Care of Minors,” looks to ease the process of allowing minors to make medical decisions on their own behalf, specifically LGBTQ minors.

The Urban Institute authored a study reporting that 20 to 40 percent of all homeless youth in the United States identify as LGBTQ.

“The bill would allow them to prove their financial independence so they can consent to their own medical care without having to be emancipated from their parents,” Shields said. “A lot of LGBTQ youth end up homeless, and we anticipate [the need for] them to obviously access healthcare services.”

With the election of President Donald Trump, renewed political turmoil threatens the work of LGBTQ and women’s rights advocates to pass these bills and other legislation.

While Massachusetts can be broadly considered a socially progressive state, challenges still arise.

“To a certain extent we are [progressive], but in many other ways we are not,” Shields said.

In the case of sexual education, Shields said Massachusetts is far behind other states such as California,  a state with sexual education programs inclusive of LGBTQ identities.

California made sexual education mandatory for all public school districts through Assembly Bill No. 329 in 2016.

SD.912, “An Act Relative to Healthy Youth,” would require all school districts which elect to teach sexual education to use a curriculum that is not solely abstinence-based.

“It’s been turned down so many times,” Shields said. “It’s simply stating if you’re doing it[,] the curriculum needs to be scientifically accurate and evidence based. It can’t be only abstinence-based.”

PPLM is advocating for SD.912 as the Commonwealth’s school districts are not required to teach evidence-based, age-appropriate, medically accurate sexual education.

Dr. Jennifer Childs-Roshak, president of Planned Parenthood’s Advocacy Fund of Massachusetts, the lobbying arm of PPLM, said this kind of legislation is much-needed given the political assaults on the Affordable Care Act, ACA.

“With threats to health care access and reproductive rights looming on the national level, it has never been more important to increase access to comprehensive sex education that empowers young people to take charge of their health,” she said.

Childs-Roshak explained that the bill would encompass both abstinence-based education and what many experts would say is a curriculum which addresses real-world realities.

Massachusetts Senate President Stan Rosenberg (D-Amherst) said it is difficult to fight for LGBTQ and women’s issues because long-held fundamental rights are now under assault.

“Now, because of the current political environment and what’s going on in Washington, we have to split our efforts between moving legislation that will solve specific problems and efforts to ensure we protect fundamental civil rights and civil liberties,” he said.

Rosenberg hopes in the current legislative session he and other lawmakers will be able to harness the power of the Massachusetts Gay and Lesbian Political Caucus, a group of LGBTQ lawmakers at the State House.

The caucus, he said, might be able to push more LGBTQ-friendly bills through the legislature.

“It can help, it certainly won’t hurt,” Rosenberg said. “Some caucuses are extremely effective putting issues on the front burner and helping to move them through.”

Arline Isaacson, co-chair of the Massachusetts Gay and Lesbian Political Caucus (MGLPC), a political and advocacy organization that lobbies regularly at the State House, said the new political climate surrounding the Donald Trump presidency sets Washington D.C., more than legislators in Massachusetts, as an enemy.

Isaacson said one thing she most fears is the potential for an executive order which would allow LGBTQ people to be discriminated against based on religious objections.

“For the most part, the threats will be generated from D.C.,” Isaacson said. “We’re very concerned that Trump will move to advance a religious exemption. That could create a loophole that you could drive a truck through.”

When posed with the threat of losing civil liberties, Isaacson said what people need to do is harness the power of the state to protect them.

“State legislators are more important now than ever before to protect us, to protect our freedoms and to protect us against the excesses and the overreach of the Trump administration,” she said.

Further, Isaacson said the populations threatened by the Trump administration need to see many of their struggles as one in the same.

“I hope that the LGBTQ community will understand their interconnectedness with other groups,” Isaacson said. “We’ve got to work together if we are going to defeat these lousy proposals.”

When asked about what people concerned with LGBTQ legislation can do to support the efforts of pro-LGBTQ legislators, Sen. Rosenberg said people need to reach out to lawmakers who are traditionally anti-LGBTQ.

“You [can help] by communicating with family and friends who live in those other districts,” Rosenberg said. “Join statewide organizations and support their efforts to help move people in other districts. Ultimately, legislators respond to the calls, letters, and stories of their own constituents first and foremost.”

Republican House Reps. Keiko Orrall (R-Lakeville) and James Lyons (R-Andover) both longtime opponents to LGBTQ-friendly legislation, did not respond to inquiries for comment.

Cyr said sharing personal stories are an incredibly effective way of turning the tide against anti-LGBTQ legislators and voters.

“Personal stories that are directly related are powerful,” Cyr said. “If you are someone who has faced discrimination as an LGBTQ person, or experienced homelessness or know someone who has, those stories are very powerful, and should be told to people who are on the fence.”