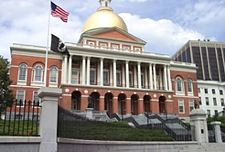 BOSTON ─ MassEquality and Boston’s leading public broadcaster, WGBH, have partnered to bring together seven of the 10 candidates for Massachusetts governor in a forum to discuss a range of issues related to the LGBTQ community and progressive policies.

Award-winning journalist and Senior Editor for WGBHNews.org Peter Kadzis will serve as the special guest moderator for the forum and will be posing questions to the candidates. MassEquality and WGBH will present a mix of questions and audience members will have the opportunity to submit questions to the candidates online. Questions will be reviewed and several questions from the attendees will be asked. Visit www.massequality.org/forum2014 for details on the event, links to candidate bios, and to RSVP. Seating is on a first-come, first-served basis.

About MassEquality: MassEquality is the leading statewide grassroots advocacy organization working to ensure that everyone across Massachusetts can thrive from cradle to grave without discrimination and oppression based on sexual orientation, gender identity, or gender expression.

About WGBH: WGBH Boston is America’s preeminent public broadcaster and the largest producer of PBS content for TV and the Web, including Masterpiece, Antiques Roadshow, Frontline, Nova, American Experience, Arthur, Curious George, and more than a dozen other prime-time, lifestyle, and children’s series. WGBH’s television channels include WGBH 2, WGBX 44, and the digital channels World and Create. WGBH TV productions focusing on the region’s diverse community include Greater Boston, Basic Black and High School Quiz Show. WGBH Radio serves listeners across New England with 89.7 WGBH Boston Public Radio; 99.5 WCRB; and WCAI, the Cape and Islands NPR® Station. WGBH also is a major source of programs for public radio (among them, PRI’s The World®), a leader in educational multimedia (including PBS LearningMedia™, providing the nation’s educators with free, curriculum-based digital content), and a pioneer in technologies and services that make media accessible to deaf, hard of hearing, blind, and visually impaired audiences. WGBH has been recognized with hundreds of honors: Emmys, Peabodys, duPont-Columbia Awards and Oscars. Find more information at wgbh.org.