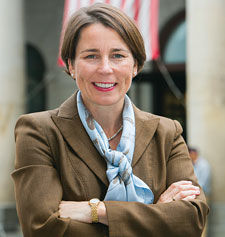 Maura Healey, a former assistant attorney general for the Commonwealth of Massachusetts, is now running for the Massachusetts Attorney General position being vacated by Martha Coakley.
Photo: Official from Campaign

In closing remarks, the candidate for attorney general made her pitch quite clear: “I say as a point guard, I am looking to grow this team. So come on forward.”

The candidate, Maura Healey, 43, is a former assistant attorney general for the Commonwealth of Massachusetts and is perhaps best known among LGBT folks for her leadership role—and big win—in a legal challenge to the federal Defense of Marriage Act, or DOMA. If elected, Healey will make history as the nation’s first openly gay state attorney general.

The setting for Healey’s remarks was a recent Cambridge meet-and-greet-the-candidate house party held Wednesday, February 26. For a little more than half an hour, Healey articulated her vision for the office she seeks.

A first-time candidate for public office, Healey, a Democrat, holds credentials which include having served from 2007 to 2013 in the attorney general’s office first as the Chief of the Civil Rights Division and then as Chief of the Public Protection & Advocacy Bureau, which oversees a range of operations including civil rights, health care, antitrust, environmental protection, consumer protection, and insurance and financial services.

Last October, at the time Healey left her position, about half the lawyers and staff in the attorney general’s office—roughly 250—reported to her. Healey stepped down, she told the gathering, “because I think this office is about three things: Standing up for individuals, safeguarding our communities, and representing values that I believe in and try to live:  fairness, accountability, and innovation.”

Those three themes resonate at the core of Healey’s vision for the public office she seeks.

“I will bring my experience and leadership to bear as your next attorney general,” said Healey, who in her remarks, touched briefly on her work implementing the buffer zone around women’s health centers, offered thoughts on preventing gun violence, and then in some detail spoke about going after “predatory lenders, unscrupulous mortgage brokers who wreaked havoc on communities across the state, stripping equity from families, communities, and neighborhoods.”

“It wasn’t just about holding them accountable by way of enforcement,” she explained. “I was concerned about the growing number of foreclosures.”

As Healey noted, the attorney general’s officer, under a program for which she had oversight, “took settlement money” and aimed it at “stopping unnecessary foreclosures around the state; and around the state—over the last 18 months—upwards of 30,000 families kept their homes.”

Working on “loan modifications for those families” and preventing “unnecessary foreclosures,” Healey added, “were good for families, good for banks, and good for communities.” Nobody, she said, needs “unnecessary blight” and “abandoned homes.”

“That’s the kind of leadership the attorney general can bring to bear on issues,” Healey said.

Fairness, standing up for people

Healey also spoke about her high profile role in challenging DOMA. “For me, as a lawyer, it was a remarkable experience,” she said, “inspiring me to this day.

“At the time, putting that case together in the office, there were many and others who tried to talk me out of filing that lawsuit. They said it was too much, too soon—that harm might come from our taking action, but for me, it was simple. There were 40,000 people in this state, spouses who were told by the federal government they weren’t really married. It was an indignity. It was wrong. It was also a real pocketbook issue for these families because they didn’t have access to all the benefits that other spouses enjoyed, so we took it on. I am proud to have built that case, to have stood in court and argued successfully there. That’s an example of what an attorney general can do.”

Better yet, she said, “We saw what happened in the aftermath of our success here in Massachusetts with other successful lawsuits, going all the way to the U.S. Supreme Court.” [pullquote]“I want to be the people’s point guard,” she added, readily acknowledging, “I’m different. I am someone who hasn’t run for office.”[/pullquote]

“Just today,” said Healey, “a Texas court struck down the state’s marriage ban as unconstitutional,” adding, “I have to say that every single action that has been filed related to marriage equality since we won here in Massachusetts has been a win. That’s where we are going. Leadership on this issue has been important. I want to be that kind of leader.”

In laying out her vision, Healey said the attorney general not only holds power to enforce laws, but also the power of the bully pulpit.

“I learned that a few years ago,” she said, explaining the case of a local, vision-impaired college student who could not access fully online course materials.

“When Apple made the software,” Healey said, the company “forgot about people with disabilities.”

Invoking the authority of the attorney general’s office, she went on to say, “We struck an agreement. Apple agreed to reprogram and make the software accessible,” for the iPhone, too, she said, “and not just in Massachusetts.”

Healey’s meet-and-greet pitch also included some personal storytelling. A small town New Hampshire native, she is the oldest of five children, all of whom attended public schools. Healey’s father taught high school history and social studies and headed his teacher’s union. Her mother served as school nurse, she told the gathering.

A graduate of Harvard College, Healey’s concentration was government. While an undergraduate there, she also captained the women’s basketball team. After college, Healey played professional basketball for a women’s team based in Salzburg, Austria for two years. Upon returning to Boston, she earned a law degree at Northeastern University, clerked for a federal district judge, and then joined the local law firm of Hale and Dorr (now WilmerHale) where she was a key player in a legal challenge, albeit unsuccessful, to end the “Don’t Ask, Don’t Tell” federal law and policy, which banned openly gay military service. Congress has since repealed the discriminatory law.

Sure enough, with sports as biography, Healey believes basketball prowess serves her well.

“People ask me ‘Are you tough enough? Can you make decisions? Can you lead the staff? Are you really ready to lead?’” she said.

The 5 foot 4 inch point guard replied, “Don’t worry about it.”

Campaign trail and beyond

After making a case for being elected the next attorney general, a reporter asked what Healey is hearing while campaigning.

“What resonates is my energy,” she said. “People know I am really committed to this stuff. I have experience as a lawyer and manager.

“I want to bring that energy and passion to this [race],” said Healey. “That message is resonating,” along with “my message of fairness and equality and being an advocate and understanding that this [office] is the people’s law firm.”

“I want to be the people’s point guard,” she added, readily acknowledging, “I’m different. I am someone who hasn’t run for office.”

For the time being, the name of the game is increased community and neighborhood visibility, enhanced name recognition, signatories on nomination papers, and delegate acquisition—all to ensure, as necessary steps, that Healey surpasses the 15 percent threshold vote at the upcoming state Democratic Party convention (Worcester, June 13-14) required for her spot on the September 9 primary ballot.

Meanwhile, Healey has picked up key endorsements, including important organizational ones, namely MassEquality, The Gay & Lesbian Victory Fund, EMILY’s List, Feminist Majority, and LPAC—The Lesbian Super PAC, a political action committee dedicated to the goal of “influencing elections by giving lesbians a meaningful seat at the political table,” according to its mission.

With a mission of electing LGBT leaders to public office “because they change America’s politics,” The Gay & Lesbian Victory Fund, in its endorsement, noted Healey’s work in combatting bullying statewide in schools and her work in prosecuting anti-LGBT hate crimes, including her work with law enforcement on best practices.

Equally impressed is Lisa Drapkin of Cambridge, who attended the February meet-and-greet gathering.

“I think Maura is super bright. Her energy is exciting. She has the ability to get things done, which is unlike other people; and she has experience having been there in the attorney general’s office,” said Drapkin. Also appealing, she added, are Healey’s “notions of equality and taking care of people in the Commonwealth.” [pullquote]Meanwhile, Healey has picked up key endorsements, including important organizational ones, namely MassEquality, The Gay & Lesbian Victory Fund, EMILY’s List, Feminist Majority, and LPAC—The Lesbian Super PAC, a political action committee dedicated to the goal of “influencing elections by giving lesbians a meaningful seat at the political table,” according to its mission.[/pullquote]

“The fact that Maura is positioned to become the country’s first openly-gay attorney general—the state’s chief law enforcement officer—is a wonderful comment on the progress we’ve made as a community,” said Cherry. “But, more importantly, voters are recognizing that Maura’s leadership on LGBT and other civil rights issues is a big part of why she’s the right choice. The LGBT community is behind her because of her work and her vision, not just her identity. It’s an exciting time.”

For more information about Maura Healey and her historic run for attorney general visit www.maurahealey.com.