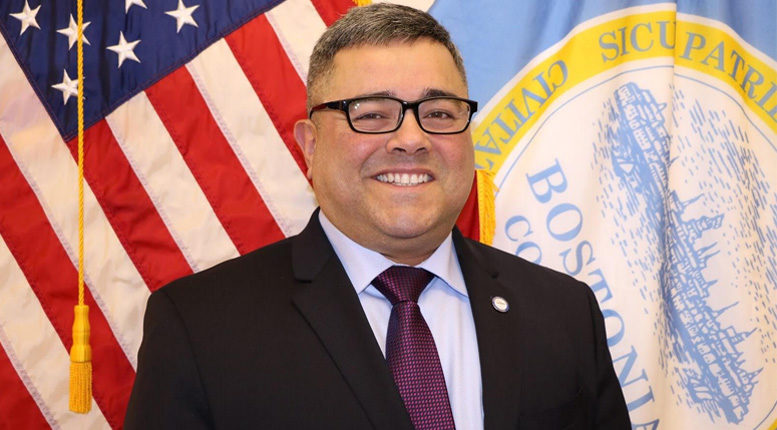 Robert Santiago will be the first Puerto Rican and LGBTQ Veterans Commissioner in the City’s history.

BOSTON—Mayor Martin J. Walsh today announced the appointment of Robert Santiago as Commissioner of Veterans’ Services for the City of Boston. Santiago will be the first Puerto Rican and LGBTQ Veterans Commissioner in the City’s history.

“I am proud to name Robert as the next Commissioner of Veterans’ Services, taking on an important role by making sure veterans in our city are well-supported and know that their service to our country will always be appreciated,” said Mayor Walsh. “Robert has proudly served our nation, and has shown through his work over the last three years that his commitment to serving our veterans in Boston is unwavering.”

In 2016, Santiago joined the City of Boston as Deputy Commissioner at the Mayor’s Office of Veterans’ Services. Prior to joining the Mayor’s Office of Veterans’ Services, Santiago served 20 years in diverse duty stations including sea duty on four warships; and overseas tours in Belgium, Puerto Rico, Panama, and Japan. Santiago participated in Desert Shield/Desert Storm, Eastern Exit, Enduring Freedom, and Iraqi Freedom. His final duty station was in Boston onboard America’s Ship of State, the USS CONSTITUTION which is the oldest commissioned warship afloat in the world. He retired from military service in 2008 while onboard USS CONSTITUTION.

“I am grateful to Mayor Walsh for this opportunity to serve the veterans of Boston,” said Santiago. “I remain dedicated to promoting the Mayor’s agenda to serving all veterans no matter the zip code, status, or orientation.”

Santiago is on the Executive Board of the Massachusetts Veterans Services Officer Association and is a life member of the Veterans of Foreign Wars and the American Legion. Santiago is also a member of the leadership team for the Homes for the Brave initiative which is part of the Mayors’ Challenge to end Veterans’ homelessness. He currently resides in Jamaica Plain with his husband, Robert Torres.

Formerly led by Commissioner Giselle Sterling, the Mayor’s Office of Veterans’ Services strives to recognize and engage our veterans and their families; advocate for assistance in their time of need, and connect them with the services they’ve earned.

The primary program of OVS is known as Massachusetts General Law (MGL) Chapter 115 and facilitated through the local Veteran Service Officer. Chapter 115 acts as financial help for veterans experiencing homelessness and low-income Veterans and their families. These benefits also include military burial assistance, subsidies on medical expenses and the decoration of veterans’ graves and hero squares for Memorial Day. OVS also hosts Operation Thank a Vet, a program for volunteers to canvass identified Boston Veterans to thank them for their service and share information about critical resources that are available to them from the city, state and federal government.

To date, an average of 10,000 veterans receives financial assistance each month from the Department of Veterans’ Services in Massachusetts with approximately 450 from OVS, the most in the Commonwealth. Through the Operation Thank a Vet program, the City has spoken to over 1,500 veterans and thanked them for their service as well as informing them of critical City services and resources.

[From a News Release.]