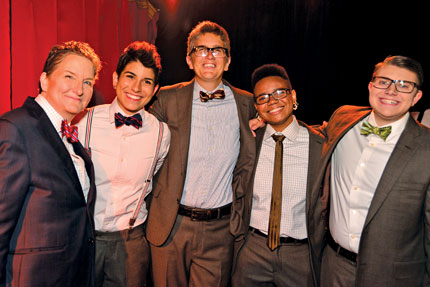 BOSTON, Mass.—California-based clothing company Saint Harridan, who specialize in making men’s styled suits and dress shirts for women and transgender men, recently spent some time in Boston, giving locals the opportunity to try on and purchase fashion from their line at two pop-up shops around town.

Going found herself in a predicament over what to wear when it came time to marry her partner of 10 years in 2008. She’d sworn off dresses, didn’t care for anything in the women’s department, and nothing in the men’s department fit. Finally, she had a suit custom-made, and the way it made her feel—even more than how she looked—sparked the idea to start her company.

“It’s like I have reached adulthood when I’m wearing a suit, like I am suddenly aware of my power, not power over people, but power as a member of society,” Going said. “It’s so hard to describe, but it’s like I didn’t even realize before that I was playing a smaller role and now what I’m wearing makes me feel the most authentic, the most myself. I feel like I’m engaged in the world from this place of power, from this place of self-worth, self-esteem, and self-respect.”

Going said the local pop-up shops were also a hit.

When asked about the fashion industry as a whole, Going said it still has a ways to go towards being inclusive.

“I think the fashion world really values the binary,” she said. “The fashion world values femininity and masculinity, and they play with it. There are many examples of women in men’s suits, famous photographs, or right now some of the fashion tends to look androgynous—quote unquote androgynous—but there is no real question of the sex of the people in those clothes. The androgynous look is really just one more way to sexualize women, and I’m not saying that people who are interested in androgyny are necessarily always leaning towards femininity, but what I’m saying is that the mainstream fashion world, when it uses androgyny, is doing it from a sexualized place, in my opinion.”

Going added that the heels, makeup and styling of androgynous looks in mainstream fashion photos leave “no question that she’s a woman,” and that even transgender models who some major retailers have recruited are “still riding a very binary representation of gender.”

“What Saint Harridan is doing is really taking masculinity and giving it to women and trans men,” Going said. “And that I think is the thing that would scare mainstream fashion companies away. To that end, I think that we’re still far away.”

Going’s wedding suit cost her $1,800, which led Saint Harridan to instead develop patterns so that they are able to sell by size instead of custom-made. Still, a Saint Harridan suit—can be purchased online, in a pop-up shop or in their Oakland, Calif. location—costs $750. Going said the company purchased four fabrics in bulk (charcoal, navy, tan, and black), which reduced the price from closer to $900, but she doesn’t foresee the price dropping any further in the near future.

“One of the things that we have to work on is that our customers are at a demographic level [that is] a lower income category,” said Going. “At this time, we are trying to figure out how to lower the price while staying ethical and being able to wake up in the morning and look in the mirror, but for now the price is an excellent price given what they’re getting in terms of quality and in terms of ethics.”

According to Going, the suits are currently made in the U.S. by workers who are part of a union and make on average $24 an hour.

In addition to ethics, Going said accessibility is also important to the company.

“We know that our customers, our fans, are all over the place, and that means that a significant percentage of them are never going to be in a pop-up city or in Oakland, and so we have worked really hard to make it accessible through the Internet.”

“I’m from South Carolina,” Going said. “I understand what it’s like to be in a small town, and so we really want our clothing to be accessible to people in South Carolina, Idaho, places that we’ll probably never pop-up.”

Harridan and co-owner Dominique “Dom” Brassey plan to continue the pop-up shop tour across the U.S. for the rest of the year and into 2015.  The company is also seeking investors.

According to their website, the name “Saint Harridan” was chosen to be as inclusive as possible.

“If we were to use words like stud or butch, we would inevitably represent some people, but leave others out,” it states. “We looked for a word that could expand our options. A Saint, among its many other definitions, is ‘a founder, sponsor or patron of a movement.’ We think that’s fitting. If you, by your very existence—including the pronouns you choose, the clothes you wear and the gender you perform—are undermining the gender binary, then that makes you a leader in this movement. And, in our book, that makes you a Saint.”

The word “Harridan,” the say, “is a reclaimed word. It means ‘mannish woman’ and has been used as a slur—to keep women from venturing too far from societal expectations.

For more information on the Saint Harridan brand, visit www.saintharridan.com.