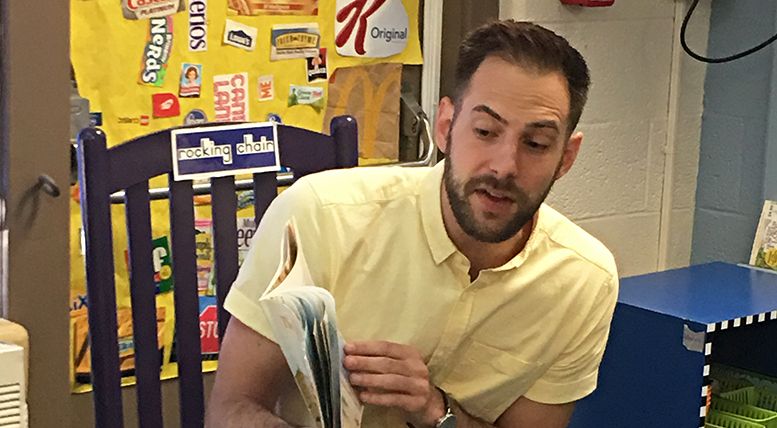 Joe Dombrowski never expected to end up on Ellen after his fourth-grade students at Oakland Elementary in Royal Oak, Michigan hilariously attempted to spell made-up words—and a queen’s name from “RuPaul’s Drag Race”—as an April Fools’ joke. But then again, Dombrowski never expected the legendary prank, which he orchestrated, filmed and posted to his social media, to seize the attention of admirers from around the world … including Ellen DeGeneres.

Just days after the video went viral; the 28-year-old teacher was a guest on the iconic comedian’s talk show. But it wasn’t attention he was after. In addition to receiving a generous $10,000 check from Shutterfly made out to Oakland Elementary (and $10,000 for him, personally)—the school largely educates children from low-income families—the teacher and now-famous trickster says he was elated that “Ellen really gave me a platform to put such a positive light on education, which is where my heart is.”

That crazy, surreal day, his heart was in the right place, but his head? Not so much. Instant Internet fame will do that to you.

“Once Ellen called, it truly hit me how big this whole thing had gone,” Dombrowski tells me, still reeling from the experience. “When I watched the interview, it all started coming back, and I just realized that I blacked out completely during it.”

This is how he remembers it: Ellen kissed him, he made her—major daytime talk-show host, Glamour Woman of the Year honoree, Emmy winner, Dory—laugh, and then the two shared a special behind-the-scenes moment. During a commercial break, Dombrowski expressed to her how her confidence as an out lesbian—and the fact that “she’s such a strong role model for all people, especially the LGBT community”—helped transform him into a confident, out gay man, both privately and professionally.

“I was actually fortunate enough to tell her that,” he explains. “She was like, ‘Hey, that truly means so much.’

“And then the money came into play, and I was like, oh my god. Ultimately, I couldn’t believe that I was able to provide a gift to my students that I wouldn’t have been able to provide on my own, so her giving me the opportunity to provide that for my school is just so humbling and mind-blowing. It felt wonderful to know that somebody believed so much in education that they would give so much back to the community.”

Some things money can’t buy, and in Dombrowski’s case, that something is a powerful, Ellen-inspired lesson he’s teaching his own students: be yourself.

“I’m always true to myself,” he says. “I don’t lie to my students, but I’m here to teach and that’s the bottom line. I’m always myself. I listen to ’90s divas, but it’s OK to like a certain type of music and it’s OK to be who you are. The person you see in the classroom is very much the way I live my life and I have absolutely no shame about what I bring to the classroom.

“It’s been really great over the years to see how students connect to that energy and realize that it’s OK for them to be themselves, whoever they are. I always send that message home with them.”

Of course, he does so in his own “Mr. D” way—sometimes by name-dropping a drag queen during a spelling bee, his viral claim to fame. And if you think that’s the biggest prank he’s pulled, the joke’s on you. For Dombrowski, it’s just another day.

“I’ve been doing this forever!” he says, geeked. “Just the other day, I convinced them that April the giraffe’s baby was named Baby Joe after me being on Ellen because it was born on the same day.” He cracks up. “My classroom family has been saying, ‘Joe, it was funny, but you have other stuff out there.'”

Those amazingly ridiculous words he asked his students to spell were made up on the spot (“blorskee,” for instance—”as in, ‘I lost my blorskee at a carnival,'” he recites during the video). Except for one: the name of “RuPaul’s Drag Race” contestant “Ro-laska-tox.” “Ro-laska-tox was surprised when Jinkx took the crown,” he told his students. “If you didn’t get the hyphens, I’m sorry, you got that word wrong.”

Dombrowski attributes the success of his epic spelling-bee joke to the time and day he posted it – his lunch hour, on a holiday—and the kid’s hysterical not-having-it grumbles.

Its instant success surprised him as much as his public outing.

“It was a bit of a shock at first,” he says, regarding the assumptions made about his sexual orientation. “I figured it would happen, and I wasn’t thrown off, but I was confused about how to move forward with it.”

Headlines in numerous LGBT outlets spotlighted his sexuality: “Handsome Gay Teacher.” “Gay Teacher From Michigan.” “Openly Gay Teacher.” But Dombrowski was relieved to discover that his sexuality wasn’t the focus of those stories. Instead, “they focused on what I’m bringing to education. They focused on what I’m preaching to my students, and they focused on the energy that we have in our classroom. They truly captured the essence of what I do in the classroom, and the fact of who I am really doesn’t matter. But the fact that I could help make a change in education—that’s what does matter.”

Dombrowski’s interest in teaching didn’t materialize overnight, but actually, his passion ignited in college while volunteering at an Ohio summer camp for terminally-ill children. In addition to teaching them, his purpose was to help lighten their load, and “just be able to have fun and enjoy themselves. When that happened, I was like, ‘Yeah, this is for me.’ I’m definitely in education because I know that I can make learning fun for all kids.”

And these pranks? He’s been pulling those longer than he’s been teaching, with friends, with cousins. In fact, he’s been honing his comedic skills over the last five years while doing improv at Go Comedy! in Ferndale, Michigan. Knowing that, it’s no wonder he’s hearing from people who, he says, tell him, “Why weren’t you my teacher? Why weren’t teachers like this when I was in elementary school?

“The bottom line is, I know there will be a day when (my students) realize that they had such a positive role model. At the end of the day, that’s what I wanna be for my students.”