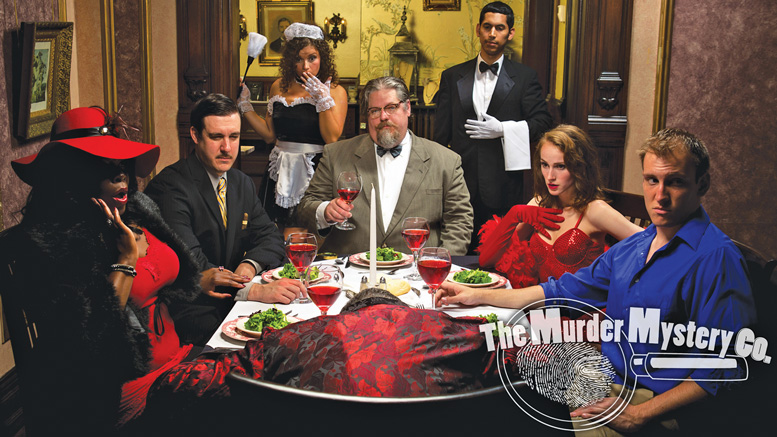 The Murder Mystery Company, an interactive “whodunit” comedy show so popular that it has sold over 300,000 tickets to its public performances, has the perfect solution for holiday events, private parties and night on the town. And, show attendees cannot get enough of them.

“These guys are the real deal, seriously,” said Bradley Fitch of Boston. I didn’t know what to expect at first since I never really understood how murder mysteries worked. I loved how they incorporated the audience into the show.”

Since its founding in 2002 by CEO Scott Crampton, The Murder Mystery Company has exponentially grown from a modest performance company to a nationally acclaimed theatrical show stopper that offers each party set to a specific theme such as Totally 80’s, Totally Murder!, Midnight at the Masquerade, The Most Wonderful Crime of the Year, a 1920’s Crime and Punishment theme and many more. Attendees are encouraged to dress in costume according to the theme to amplify the experience.

“I have never been to a murder mystery dinner before but I must say we had a great time!” an recent attendee of a Quincy, Mass. show said of the company on Trip Advisor. “… The entertainment of the night is obviously the main factor and I thought it was awesome!”

If you are not up for planning your own show, the theater company offers several public shows throughout New England and the rest of the country by professional improv actors.

According to the company’s website, the “public shows are generally two and a half hours full of mystery, intrigue, and murder!,” it reads. “… The show contains two ‘investigation times’ in which you can mingle with other guests and mystery experts.”

Attendees are provided with the perfect set to gather clues and attempt to solve the crime.

“It was like a life version of the game Clue,” said Fitch. “So fun.”

Private events may also be customized to appeal to niche markets according to Amanda Lea Carver, a Personal Event Specialist for the company. LGBTQ details can be incorporated into the theme itself to create a highly personalized experience she said.

The company’s website reads that, “each state has its own director and a cast of local actors—25 directors and more than 1,000 actors nationwide… And they are all kept very busy! Not only do they perform dozens of shows every month at some amazing host venues, but they do hundreds of private shows, as well. Added together, they perform more than 3,500 shows for over 300,000 guests every year!”

According to Crampton, “a mystery brought to you by The Murder Mystery Company is a worry-free, hassle-free experience,” as noted on the company’s website. “All you need to do is show up and be prepared to have an incredibly memorable night!”

The Murder Mystery Company is the largest theatrical company throughout the United States. If you’re looking for a quality comedy murder mystery, there is no need to look anywhere else.

To schedule your party, learn more about their events, or purchase tickets for public performances, check out The Murder Mystery Company at https://murdermysterydinnerboston.com. Have a killer time.