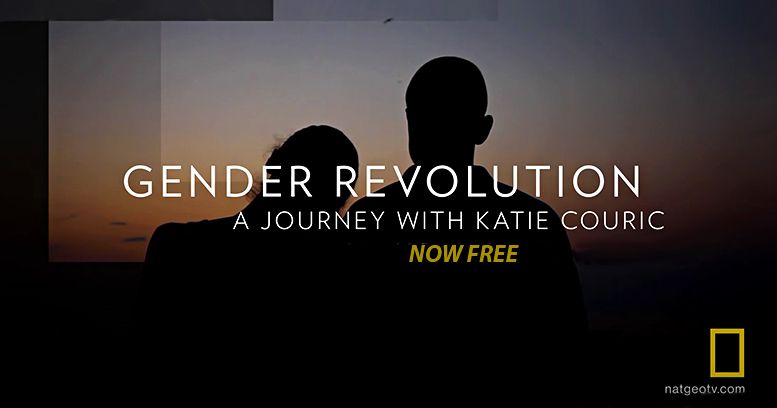 WASHINGTON—National Geographic has announced it will make the two-hour documentary GENDER REVOLUTION: A JOURNEY WITH KATIE COURIC available to stream for free, beginning Tuesday, Feb. 14, for one week. The stream will be available on National Geographic’s website, YouTube channel, Facebook page, Apple TV app and TV Everywhere mobile apps. Produced by Katie Couric Media with National Geographic Studios and World of Wonder Productions, network will also air a special encore of the documentary on Monday night, February 13 at 9/8c.

Hailed as “powerful” by Ellen Degeneres, “groundbreaking” by the Huffington Post, and “compassionate, incisive, and informed” by the Daily Beast, Gender Revolution: A Journey Wtih Katie Couric explores the rapidly evolving complexities of gender—from the moment we are born through our twilight years. To better understand this complex social and scientific issue, Couric crisscrossed the U.S. to talk with scientists, researchers, activists, authors and families to learn more about the role of genetics, brain chemistry and modern culture on gender fluidity. Her wide-ranging interviews included a conversation with Gavin Grimm, the transgender Virginia teen whose lawsuit seeking equal bathroom access is headed to the Supreme Court on March 28. With discussions that range from the scientifically enlightening to the deeply personal, Couric’s unflinching search for truth sheds light on countless untold stories of struggle, understanding, ignorance, hurt and love.

“I’ve always hoped this documentary would be a spark to ignite conversations in every corner of the country around the evolving landscape of gender,” said host and executive producer Katie Couric. “National Geographic is helping to push that goal forward by making it so broadly available to audiences.”

In addition, National Geographic continues to partner with Picture Motion on the Gender Revolution Tour, allowing any high school, college, university or nonprofit to sign up to host a free screening and discussion. To date, more than 300 groups nationwide have signed up to participate. The tour harnesses the momentum of the gender conversations happening around the globe and offers an opportunity to have an informed dialogue on one of the most complicated and evolving issues in the current zeitgeist. Groups will also be provided with an extensive discussion guide developed for National Geographic by Journeys in Film (link). Screening requests can be made at http://bit.ly/NatGeoGenderRevolution.

The documentary is also currently airing on National Geographic around the globe in 171 countries and in 45 languages.