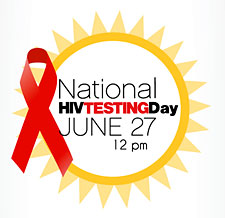 A new study by the U.S. Centers for Disease Contorl finds that both the number of HIV tests administered and the number of new HIV diagnoses were substantially higher in the week around the 2010 National HIV Testing Day (NHTD) than in two other “control” weeks during that year. For the study, CDC researchers analyzed HIV testing data collected through the 2010 National HIV Prevention Program Monitoring and Evaluation System. They compared testing data for the number of HIV testing events and new HIV-positive diagnoses for the week of NHTD (June 24-30) with two control weeks (January 7-13 and August 12-18). The comparison revealed that an average of 15,000 more testing events were conducted and 100 more new HIV diagnoses were identified during NHTD week than during the control weeks.

In addition, compared to persons tested during the control weeks, a significantly higher proportion of those tested during NHTD week were: aged 50 years or older; non-Hispanic Blacks or African Americans; men who have sex with men; low-risk heterosexuals; tested with a rapid HIV test; or tested in a non-health-care setting.

“NHTD campaigns reached populations disproportionately affected by HIV and further expanded testing to people traditionally less likely to be tested,” the CDC researchers noted. “Incorporating strategies used during NHTD in programs conducted throughout the year may assist in increasing HIV testing and the number of HIV-positive diagnoses.”[pullquote] … a significantly higher proportion of those tested during NHTD week were: aged 50 years or older; non-Hispanic Blacks or African Americans; men who have sex with men; low-risk heterosexuals; tested with a rapid HIV test; or tested in a non-health-care setting.[/pullquote]

Toward that end, National Gay Men’s HIV/AIDS Awareness Day (NGMHAAD) was held last Saturday, September 27. The National Association of People with AIDS founded NGMHAAD “to help gay men remember how much we have accomplished together in the fight against HIV/AIDS, remember the quarter-million lovers and brothers we have lost, and renew our commitment to ending what is now an endable epidemic.”

Information about how HIV impacts gay and bisexual men is below:

From the U.S. Centers for Disease Control and Prevention (CDC)

From the UCSF Center for AIDS Prevention Studies

Of these four approved regimens-in-a-pill, Triumeq is the first that does not contain the drug tenofovir. Although tenofovir is generally a well-tolerated drug, some people experience tenofovir-related bone and kidney side effects, or have existing bone or kidney problems that may keep them from taking tenofovir or combination pills containing the drug. For such persons, Triumeq may be an alternative one-pill-a-day option for HIV treatment. However, before starting Triumeq, patients need to be screened for a genetic marker called HLA-B*5701. This marker helps identify the small percentage of people who can develop a severe drug reaction to abacavir―one of the component drugs in Triumeq. [pullquote]If you were not able to get tested this weekend, think about getting tested soon if you have not been recently tested for HIV. HIV testing is available on a walk-in basis at Fenway: Sixteen at 16 Haviland St., Boston Monday through Thursday from 9 a.m. to 6 p.m. and Friday from 9 a.m. to 5 p.m. (excluding holidays).[/pullquote]

A new Triumeq fact sheet from AIDSmeds.com has more detailed information about the treatment―including its dosing, drug interactions, side effects, contraindications (who shouldn’t take it), and the drug maker’s patient assistance program for persons who do not have private or public health insurance and are unable to afford Triumeq.

This June, New York Governor Andrew Cuomo announced a plan to reduce new HIV infections in the state below epidemic levels by 2020. In the plan, pre-exposure prophylaxis (PrEP)―prescribing HIV medications to uninfected persons to prevent infections―is identified as one of three key strategies for reducing new infections. In this blog item, Dan O’Connell, Director of the New York State Department of Health’s AIDS Institute, outlines a six-step process for implementing PrEP statewide. “If PrEP works the way we believe it can, we will be on the fast track to meeting our objectives: few new infections, longer lives for those with HIV, bending the curve on AIDS,” O’Connell concludes. [pullquote]In recent years, there has been a growing body of evidence that transgender women have disproportionately high rates of HIV infection and substance use, as well as unemployment, poverty, violence, victimization, and discrimination.[/pullquote]

In recent years, there has been a growing body of evidence that transgender women have disproportionately high rates of HIV infection and substance use, as well as unemployment, poverty, violence, victimization, and discrimination. The National Transgender Discrimination Survey (NTDS), conducted during 2008 through 2009, collected data on the life experiences of a large sample of transgender and gender-nonconforming adults from across the U.S. Researchers from The Fenway Institute and Harvard School of Public Health recently analyzed the NTDS data to determine the rates of incarceration and victimization while incarcerated among nearly 3,900 transgender women.

“Trans sex workers (TSWs) are amongst the most marginalised and vulnerable sex workers due to widespread social stigmatisation attributable, in general, to transphobic prejudice in almost all countries,” according to a recent briefing paper from the Global Network of Sex Work Projects (NSWP), In Edinburgh, U.K. The 14-page briefing paper focuses on the issues and needs identified by TSWs in NSWP-sponsored focus groups and an online questionnaire. These include the criminalization of sex work, violence targeting TSWs, and pervasive discrimination that limits access to education and employment, housing, justice, and appropriate health care services. The paper includes a series of recommendations to guide policy-makers, program designers, funders, TSW allies, and the news media who wish to support TSW advocacy and activism efforts worldwide.