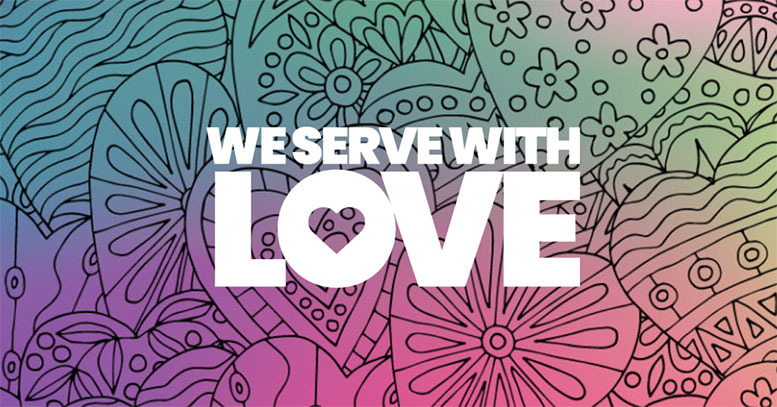 “As a survivor of the shame of growing up poor, Black, and queer, I hope the “We Serve with Love” campaign sends a strong message to poor LGBTQ people that they are worthy of love and are in fact loved,” said Tyrone Hanley, NCLR Senior Policy Counsel and We Serve with Love Founder. “Oppression, including from religion, leaves us with the impression that we are unlovable when nothing could be further from the truth. By bringing together faith-based providers from around the country to share this message, this campaign shines a light on the profound love that exists in our communities, including for LGBTQ people living in poverty.”

“The member agencies of the Network of Jewish Human Service Agencies (NJHSA) are committed to serving all who come to their doors in need of assistance,” said Reuben D. Rotman, President, and CEO, Network of Jewish Human Service Agencies. “We are proud to partner with the We Serve With Love campaign as a demonstration of our Jewish values, and of our commitment to inclusivity while modeling for other faith-based human service providers comprehensive and inclusive services to LGBTQ+ community members,”

“At NETWORK Lobby for Catholic Social Justice we advocate for federal policies that respect the dignity and ensure the economic security of all in the United States, no exceptions,” said Laura Peralta-Schulte, Chief Lobbyist, NETWORK Lobby for Catholic Social Justice. Today, 1 in 5 members of the LGBTQ+ community live in poverty, more than double the national rate. No one should have to struggle to make ends meet because of who they are or who they love. Motivated by our faith, which calls us to love one another, NETWORK is proud to support the We Serve with Love campaign, shining a light on the many faith-based service organizations that provide safe and inclusive support to members of the LGBTQ+ community.”

“As we strive to fulfill our Jewish tradition’s vision for a world where ‘there shall be no poor among you,’ (Deuteronomy 15:4), we see how the intersecting injustices of homophobia, transphobia, sexism and systemic racism prevent us from achieving that aspiration,” said Rabbi Jonah Dov Pesner, Director, Religious Action Center of Reform Judaism. “LGBTQ+ individuals in the United States are almost twice as likely to live in poverty than the general public, and the rates are even higher among LGBTQ+ People of Color, LGBTQ+ women, and transgender individuals. Guided by our core belief that all humans are created b’tzelem Elohim, in the Divine image, we know that our LGBTQ+ congregants and neighbors make our communities whole. We are committed to ensuring that people of all sexual orientations and gender identities can access the resources, caring support systems, and economic opportunities that enable them to thrive.”

“MAZON has long been concerned about LGBTQ older adults facing poverty and food insecurity — we know that they often have endured a lifetime of discrimination and continue to face persistent challenges and heightened isolation. Grounded in the Jewish values of tzedek (pursuing justice) and b’tselem Elohim (respecting the inherent dignity of every person), we are proud to be a national ally of the We Serve with Love campaign,” said Abby J. Leibman, President & CEO, MAZON: A Jewish Response to Hunger. It is clear that faith-based organizations play a critical role in combating hunger in this country, and we will continue to do everything we can to ensure that everyone facing hunger — including LGBTQ older adults — can access the assistance they need, with dignity and without discrimination.”

Other work by the NCLR can be viewed here.