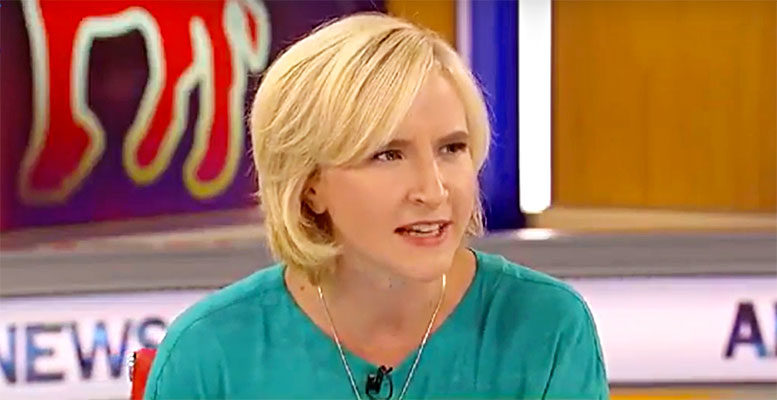 Harrington replaces Kayleigh McEnany, who’s leaving to serve as press secretary for President Trump’s reelection campaign. While the Trump administration and the Republican Party make no effort to hide their transphobia — Trump’s ban on openly transgender service members went into effect Friday — Harrington’s antipathy towards trans people is excessive and shocking even by GOP standards.

Most recently, Harrington served as a senior writer for the conservative Washington Free Beacon; she appeared frequently on cable news shows and wrote columns for other far-right publications. Here are a few things Harrington stated about transgender people in a July 2017 op-ed for The Morning Blaze:

“It literally even says, she [a student who objects to sharing facilities with a transgender student] can be removed and put into their own bathroom, single-occupancy bathroom, as long as it doesn’t stigmatize the gender non-conforming student, whatever that means. Cause it’s, like, still all about this one kid who wants all the attention.

“Part of this is if a kid feels uncomfortable, that kid has to be segregated from the rest of the group, not the one kid who’s saying, ‘Hey, I’m a girl now, let me come into the girls’ locker room and bathroom.’

“It’s crazy, it’s literally insane how trendy this has become and then all of these rules in place for something that really was very, very uncommon and now everyone has to change.”

“The military is no place for political correctness. And the military discriminates on who serves every day. If you’re obese, if you’re flat-footed, you know, a variety of medical reasons you can be denied from entering the service. And the fact of the matter is, there’s a tremendous amount of cost involved with transgender individuals.

“There’s a tremendous amount of cost, but it’s also the readiness issue. And I don’t think there are many qualified people that can serve. And really, disqualifying transgender because of these very practical reasons shouldn’t get in the way of us being a strong military force.

“Even the RAND Corporation admits that every transgender soldier who goes through transition will be out an estimated 238 days. So that is 238 days that they’re not going to be deployed overseas in active duty and someone else will have to go in their place. So when the White House says this is about cost but it’s also about readiness, they’re absolutely right, because they’re taking the place of someone else, and they’re get to have the taxpayer-funded surgery, and then they’re not available to be deployed because these surgeries are extensive and then it’s 238 days. That’s most of a full year. So it’s really striking.”

The Advocate reported that Media Matters “uncovered that Harrington completely manufactured her description of trans service members being out of commission for 238 days.”

In addition, the “Republican Party and Trump administration have repeatedly attacked the LGBTQ community and treated us like second-class citizens,” DNC LGBTQ Media Director Lucas Acosta told The Advocate. “That the RNC would hire a transphobic spokesperson is unacceptable, but it’s not surprising.”