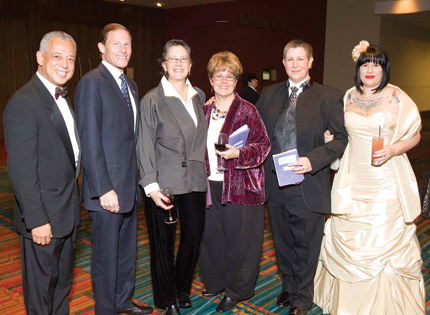 HARTFORD, Connecticut – The tenth annual fundraiser for the Hartford Gay and Lesbian Health Collective, the largest organization in Connecticut devoted to the LGBT and HIV/AIDS communities, succeeded in raising monies to support their LGBT and HIV/AIDS health programs and services in the greater Hartford area. One Big Event, held yearly in the fall, was reinvented for this year, and was attended by over 500 people.

“One Big Event is unique because it is the largest black tie LGBT event held at the largest event facility in Connecticut. Our goal was to raise $125,000, and we did,” said Dan Millett, Development Coordinator for the HGLHC.

According to a press release published after the event, this was the best One Big Event yet, and “dignitaries such as Hartford Mayor Pedro Segarra and Senator Richard Blumenthal … commented on the significance of the evening.”

The evening included over 200 live and silent auction items, dinner, cocktails and dancing. This was the first LGBT event ever held at the Connecticut Convention Center, the largest such venue in the state. This new location was part of their new ad campaign, “New Look, New Venue, New Attitude,” which aimed to be “sexy and sophisticated,” according to Millett. “We outgrew our old venue and … the new attitude was to emphasize the tenth year of One Big Event and how it has grown.”

The Hartford Gay and Lesbian Health Collective seeks to provide medical and dental services, education and support groups and referral services for the LGBT communities, according to the HGLHC website, and it serves clients of all genders and gender identities, sexual orientations, ages and ethnicities.

Funds raised from the event support all programming by the HGLHC, including HIV programs, counseling/testing and education, educational and social groups for Latino men, an assortment of support groups for LGBT people of all ages and needs, as well as various medical services. The press release stated that this monetary success was due to the support of not only attendees, but auction donors, advertisers and sponsors, and that an appeal to the audience by Michael Wilson, former Artistic Director of the Hartford Stage, raised over $15,000 alone, by reminding those in attendance how the Health Collective meets the many needs of the community.

Next year, the event will be held in October, again at the Connecticut Convention Center, and will mark HGLHC’s 30th anniversary of service to the LGBT and HIV/AIDS communities, said Millett. The organization is also beginning to develop other fundraising events to be held throughout the year.

For more information about One Big Event and the Hartford Gay and Lesbian Health Collective, visit www.onebigevent.org and www.hglhc.org.