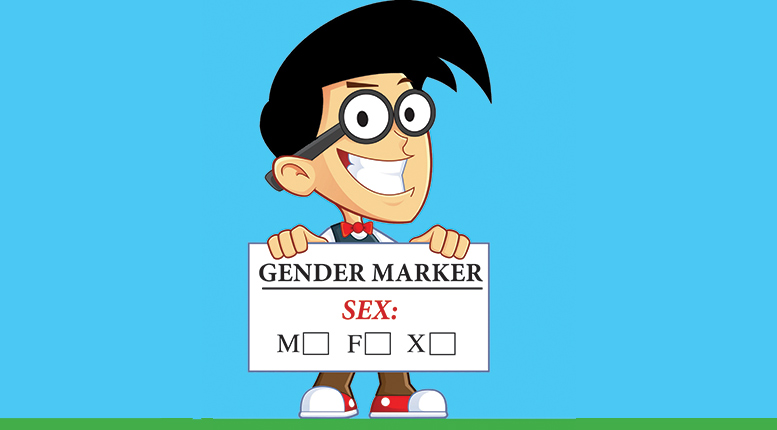 After California, New Jersey, Washington state, and Oregon, New York City will become the fifth locality in the United States to offer a gender-neutral “X” option for birth certificates, a move that many herald as a progressive step forward.

“This change may seem small but it is monumental,” trans activist Tanya Asapansa-Johnson Walker told NBC News at the signing ceremony for the new law.

2014 saw New York City passing a law allowing transgender people to easily change their gender designation between male and female on birth certificates and this latest bill, signed in early October, acknowledges the rights of intersex, non-binary, and gender non-conforming people, who are often ignored in conversations around gender identity.

However, there is still a legal gray area when it comes to the rights of trans people and gender identification in legal documents. Only four states provide gender-neutral birth certificate options and there are no laws dictating whether the other 46 must acknowledge, or even respect, the “X” gender designation.

Federal passports only provide a male and female gender with no “X” gender option available. In order to change a gender designation on a passport, a trans person must have a physician attest to their participation in gender affirmation medical treatment.

In September, Dana Zzyym won a four-year legal battle when a federal court in Denver ruled that the 60-year-old U.S. Navy veteran could receive a passport affirming their identity as neither male or female.

What if the Bay State followed suit?

Blessing Ajaero, a Massachusetts resident who identifies as transgender, said that if the Commonwealth followed in the steps of the other four states, it would be an even greater victory for trans rights.

“I think it would be more inclusive for intersex, trans/nonbinary, and gender non-conforming folk,” they said. “Scientifically, we already know that both gender and sex are spectrums. Many of the variations that are termed ‘syndromes’ are actually common chromosomal manifestations. It would be incredibly validating to finally be able to reflect that on a necessary legal document of identification.”

Mason Dunn, executive director of the Massachusetts Transgender Political Coalition (MTPC) agreed, saying that it could open up a path for gender non-conforming people to have more public affirmation of their identities.

“Having access to identification documents like birth certificates would be a monumental win for the visibility and acceptance of trans, non-binary, and intersex people in Massachusetts,” he said.

Jennifer Levi of the GLBTQ Advocates and Defenders (GLAD) said that, from a legal perspective, it’d be hard to predict what the implications would be for such a change in Massachusetts.

“It would be a largely new development,” she said. “It is therefore difficult to predict the legal effect at this point; cases and policy would need to be developed to determine what weight or meaning to give an ‘X’ marker.”

A Problematic Definition of Sex

On October 21, The New York Times reported that the federal government is considering a very narrow definition of sex, mainly one that is based on the appearance of genitals at birth and cannot be altered.

A definition of sex as binarily male or female, based solely on one’s genital presentation at birth, and legally unalterable would be a massive hit to the trans community. According to the Times, the U.S. Department of Health and Human Services (HHS) is considering narrowly defining sex as an update to the federal Title IX law that prohibits gender discrimination in federally funded education programs.

“That would be a dramatic shift in federal law, which has never before included a definition of sex,” said Levi. “For federal law purposes, sex has been understood to have a broad definition and courts have interpreted it to include transgender people and individuals who do not meet stereotypical gender norms. The kind of change reported would be devastating and have hugely negative consequences for transgender people, including anyone who does not live [consistently] with their birth sex.”

“I am deeply troubled by the Trump Administration’s attempts to incorrectly define gender as sex assigned at birth,” he said. “Furthermore, the biologically inaccurate assumption that sex is binary erases intersex and trans people at the federal level. Our communities will not be erased, nor will we accept this blatant attempt to define us through a lens of bigotry and misinformation.”

When asked about the move by the government, Ajaero said they hated it and that it would only cause more trouble for gender non-conforming people.

“If you have any understanding of psychology, sociology, biology, and history beyond the fifth grade, you know that this is just plain wrong, factually,” they said. “Determining sex only by genitalia is reductive and ignores all that we’ve learned through centuries of research about chromosomes, hormones, etc. Then on top of that, when you factor in the deliberate attempt at invalidating trans and intersex folks, it goes from factually wrong to morally wrong.”

Dunn explained that the recent announcement by HHS means that states will have to double down on fighting for their own rights for trans people.

“It certainly raises the importance of state battles for trans rights,” he said. “And it makes the fight for rights here in Massachusetts all the more important to win this November and beyond.”

Dunn is referring to the “Yes on 3” ballot campaign, a statewide effort to protect the 2016 law providing civil and legal protections to transgender people in public spaces.

While the HHS proposal to define sex under Title IX is still in its early stages, Levi said that it will be important for states to provide comprehensive protections for trans people.

“ … federal civil rights laws are intended to provide a floor of protections and states can go above that,” she said. “Many, including the New England states, have done so. The federal government should not restrict states from going further than federal law in expressly protecting vulnerable groups and individuals.”

Ajaero said that they are disturbed by the Trump administration’s attempts to attack trans people.

“This administration makes me heartsick,” they said. “Though I’m Black, queer, and first-generation, I have never been as consumed by the political world as I’ve been since 2016.

“It’s already horrifying when a government is lobbying to remove and restrict your rights, to dehumanize you and make you wish you’d never been born, but it’s even worse when someone so obviously callous and cruel is the face of the movement. You can’t even appeal to his better nature or to his need to save face. He has a terrible reputation amongst marginalized folk and doesn’t care about keeping up a veneer of kindness or indifference like some other politicians. He just straight up hates us!”